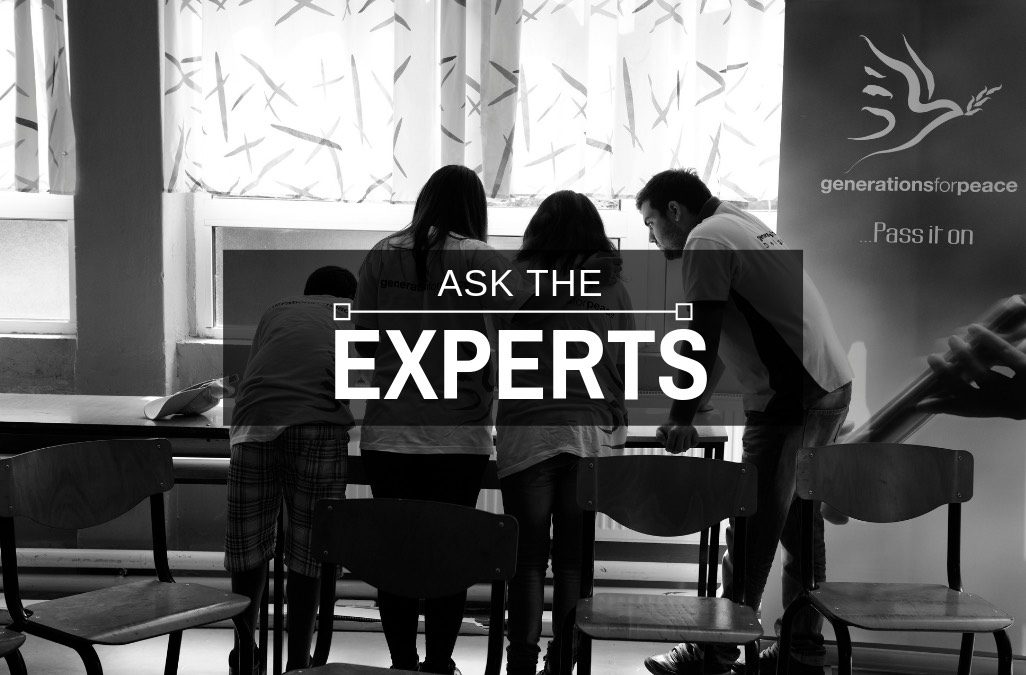 “Why do we need long-term strategies to reduce and prevent global violence?”

In the seventh post of our “Ask the Experts” blog series, Generations For Peace is joined by experts from around the world to answer a new question in honour of the Global Fragility Act, which would require the US government – in collaboration with civil society – to develop a 10-year strategy to enhance stability and to reduce violence and fragility globally.

Elizabeth (Liz) Hume | Vice President at the Alliance for Peacebuilding

Roughly two billion people live in countries where development is affected by fragility, conflict, and violence. Wars and violence have triggered the worst displacement and refugee crisis ever recorded, and deaths from organized violence have risen over 230 percent globally in the past 10 years. In the face of rising levels of violence worldwide, the peacebuilding community and policymakers know they need different approaches to reduce and prevent global conflict and violence and increase funding in under resourced prevention programs. The Global Fragility Act is a crucial step in launching a unified new approach that could reorient the U.S. government’s policies and foreign assistance towards fragile and conflict affected states and shift resources to prevention programs over a sustained period.

The Honorable Chris Coons | US Senator from Delaware

For the first time since the Cold War, violence is increasing worldwide. Violence containment costs the global economy nearly $15 trillion/year. Since 9/11, the United States has spent $5.9 trillion to combat terrorism.

The Global Fragility Act aims to get ahead of this challenge by addressing the root causes of violence that threaten regional stability and U.S. national security. It would create a coordinated long-term strategy incorporating U.S. diplomacy, development, and defense policies and would establish a multi-donor fund to leverage public and private resources from partners around the world to reduce fragility and prevent violence. This legislation passed the House and the Senate Foreign Relations Committee and has bipartisan support, including from Senators Graham and Young, who have been great partners.

To fulfill and attain the 17 SDGs, reduce violence and prevent violent extremism, there is crucial need for strategic plans adapted to each country, each sector and each age group. These strategic plans will incubate change-makers, working on the basis of the leadership pyramid and paving the way up to support a new generation of grassroots, middle and national leaders. This will create an inclusive society with equal opportunities and well-being for all. We need strategic plans to work with children, young people and women for at least ten years, covering all economic, political, educational and social aspects. They should be focused on a participatory and inclusive approaches with a focus empowering a new generation that adopts the values of democracy and peace.

Long term strategies are needed to address global violence because if unchecked, it can only lead to more death. I don’t think that is what any of us want. It is going to take years to see the results of any strategy because we are dealing with multiple conflicts at the once. Some have lasted hundreds of years. The core of most conflicts is that participants are dealing with social emotional issues, low esteem, insecurity and/pain. They do not know how to deal with this. On top of that, recognizing the humanity in others is something that doesn’t happen in these cases. It is easier to justify violent acts if the recipients aren’t human. So, yes we have a lot of work to do.

Violence wastes money. The annual global cost of violence is $14.1 Trillion (11.2% of GWP). Efforts to prevent violence have a compelling moral argument, but also a compelling economic argument, supported by evidence about the cost effectiveness of peacebuilding, that $1 spent on ‘upstream’ violence prevention saves $16 on the ‘downstream’ costs of violence. And yet, global annual spending on violence prevention is approximately $10Bn; whilst annual spending on ice cream is $11Bn; perfume $15Bn; cosmetics $18Bn. This is a squandered opportunity which directly constraints humanity’s ability to achieve the Sustainable Development Goals. The Global Fragility Act is a game-changing whole-of-government approach by the USA, leading the world in increasing investment in longer-term peacebuilding efforts addressing ‘upstream’ causes of violence and fragility, not merely their ‘downstream’ symptoms.

Richmond Blake | Director of Policy and Advocacy at Mercy Corps

The world is experiencing a 25-year peak in violence. Armed conflicts and the spread of violent extremism around the world are driving record levels of displacement – 70.8 million people – and human suffering. Reversing rising trends in violence is one of the most critical national security and development challenges of our time, and we need a new strategy. The Global Fragility Act would replace a piecemeal and underfunded approach to conflict prevention with sustainable ten-year plans to address violent conflict in some of the world’s most fragile countries. This long-term approach creates a laboratory to test which diplomatic and development efforts are most effective at reducing and preventing violence. We now have the chance to build more evidence that demonstrates the powerful benefits of comprehensive conflict prevention strategies.

We need more effective, long-term strategies to prevent global violence because our current approaches are reactionary with temporary fixes that are not sustainable. They too often rely on externally-driven interventions that ignore the most untapped resource for success: local peacebuilders. The Global Fragility Act is an essential first step to creating more comprehensive and inclusive approaches that address the long-term “underlying causes of fragility and violence through participatory and locally-led programs.” Including locals in the prevention and violence reduction strategies is imperative for long-term success because they are the eyes and ears of peacebuilding on the front lines of conflict. Their unique and in-depth knowledge, local relationships, and ongoing presence is the key to long-term sustainable reduction and prevention of global violence.

As war broke out in the Central African Republic, I remember leaving a relief coordination meeting with a UN aid official. Depressed, he reflected “the problem here is that we have kept substituting emergency relief for development and peacekeeping for peace.” Thousands died, a million fled and UN peacekeepers were sent for the third time in two decades.

Each year, conflicts in fragile states cost billions of dollars and millions of lives. Yet, the world responds to long-term problems with short-term solutions that target symptoms, not causes. Some are trying to change this. The US Global Fragility Act would create flexible options to address chronic crises, strengthen development and diplomacy, and channel support to building safe and just societies. It’s an idea whose time has come.

Because one-half of peace agreements reached between warring parties descend into violence within 5 years, we need to have at least a decade long strategy, like that outlined in the Global Fragility Act, for more effective peacebuilding. Such a time and resource commitment increases the capacity of the conflicting parties to build the partnerships and programs that lead to new robust institutions critical to violence reduction and dispute settlement.  Such an expanded timeframe also helps solidify a peace process more inclusive of youth, women and minorities. And a decade creates space for the always needed program and process adaptations for achieving desired results without the worry that only glowing reports will renew peacebuilding funding on the more typical 2 – 3-year cycle.

At USIP, our conviction and motto is that peace is possible. But in fragile states with deeply rooted governance, security and development challenges, the pursuit of peace requires a coordinated, sustained strategy.  Partnering with local actors working for change and avoiding the stop and start of resources that can cripple more effective action is essential.

At the same time, effective strategies must identify “quick wins.” USIP has supported and trained Iraqi facilitators who negotiate local peace accords in communities ravaged by the ISIS occupation, forestalling further violence and enabling displaced Iraqis to return home. Peace must often be built from the ground up, addressing local grievances and demonstrating change is possible while buying time for the deep-seated, national progress that can take decades.