Bold Steps to Change the Narrative in Nigeria 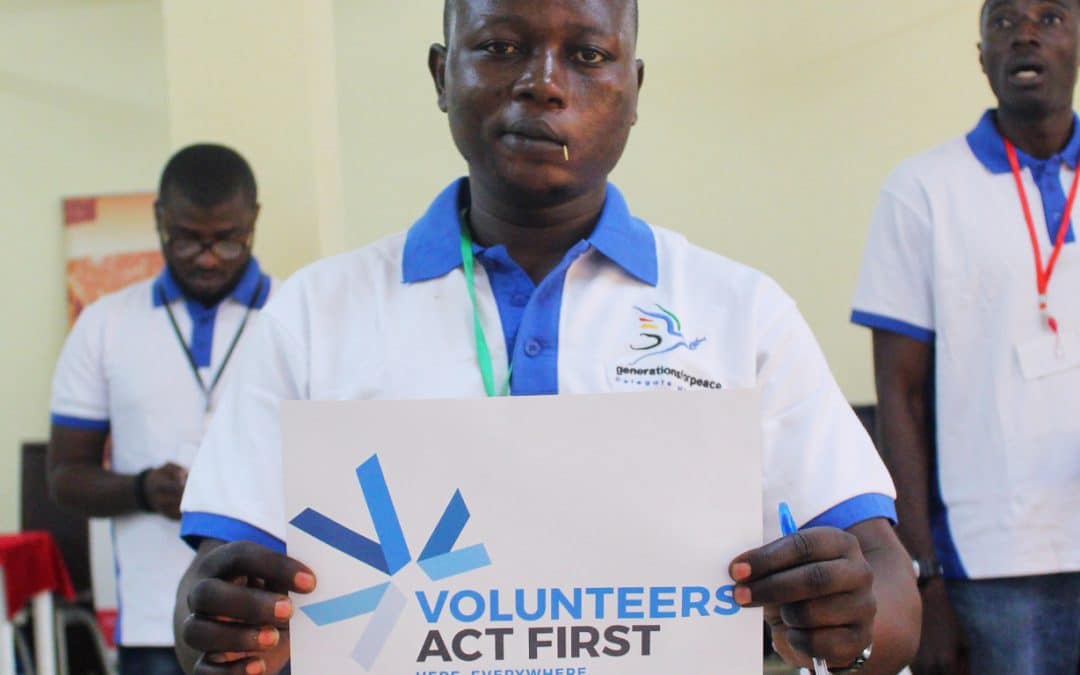 Nigeria’s Kaduna state is home to over 50 indigenous ethnic groups. The region’s longstanding tensions are increasingly expressed in ethnic terms, including those between the Fulani-herdsmen vs Farmers clash in southern Kaduna and among and within the Igbo ethnic groups living across the country. The result has been the creation of a widely-held stereotypes against, among, and between these respective groups.

Abubakar Nasidi, a participant of the Generations For Peace Dialogue For Peace Programme, is one of the Fulanis who have experienced the scarring effects of this stereotyping. He is a 35-year-old Fulani from a polygamous family living in a community with diverse religious and ethnic groups. While he learned early-on to respect people from diverse ethnic and religious groups because his father was a community leader, he has found that others did not have the opportunity to learn that valuable lesson. 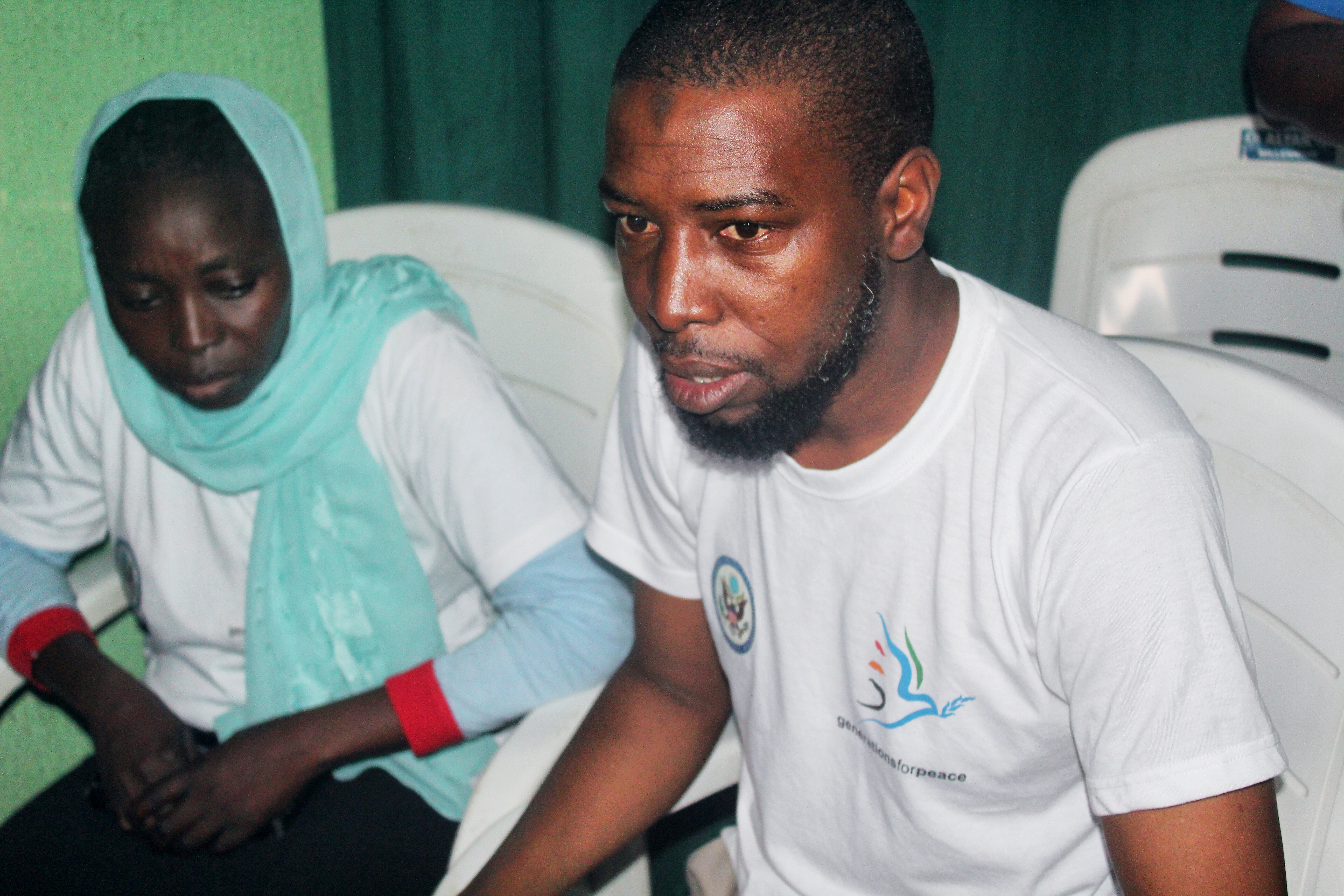 Abubakar engaging in a GFP Dialogue For Peace session in Nigeria

As a journalist, he saw firsthand how violent conflict has driven people apart from different ethnic and religious groups, and despite his upbringing of tolerating and respecting people from diverse backgrounds, he began to develop a worldview of his own.

A Fulani man is often stereotyped as a terrorist due to the Fulani-herdsmen/Farmers crisis in Kaduna state and other regions within Nigeria. “Although I come from a family that embraces all ethnic and religious groups, I lost my way. I felt if other ethnic groups are against us, then it is ‘us versus them.’ I became more unfriendly to the Christians of diverse ethnicities and more sentimental to other groups that seemed more like me in religion and culture.”

This mindset, however, wasn’t taking him very far, so he had a rethink and change his perspective towards other ethnic and religious groups. “I had to sit back and think of my actions, and I discovered the demerits far outweighed the merits. I began to realise that it would be good to see things from the angle of the other side, as I wanted to understand their perspectives as well. I came to understand that blaming each other for the violence is only setting us back.”

One of Abubakar’s friend’s, Karlmax Daniel, is a seventh-generation GFP Delegate and a fellow journalist. Because of their friendship, it was not hard for Abubakar to invite him to join him as a part of the Dialogue For Peace Programme. This was the beginning of a bold step he took in advocating for inter-ethnic and inter-religious tolerance and respect. 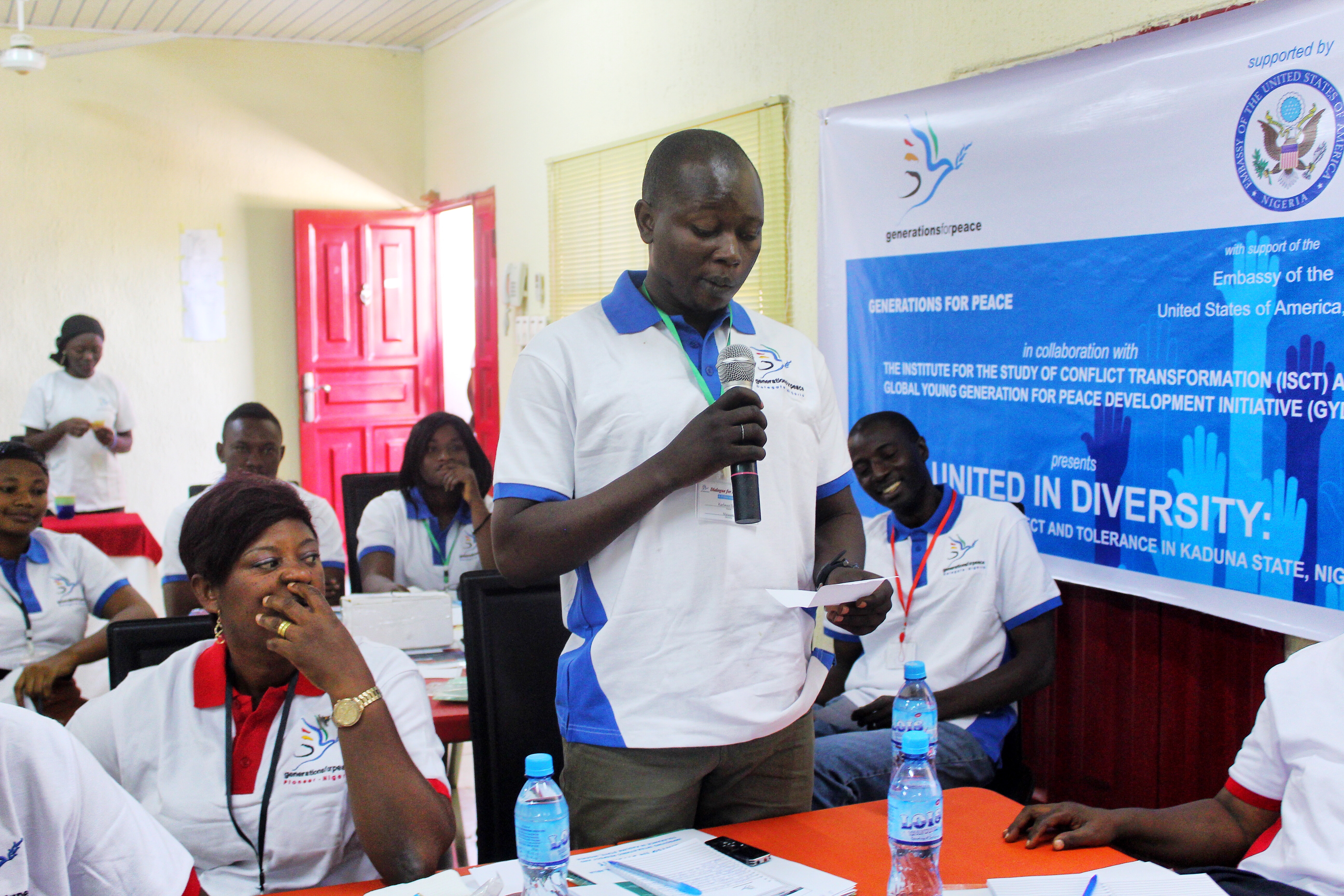 Karlmax surrounded by a community of passionate peacebuilders, sharing his thoughts and advocating for peace

“When I started advocating for peaceful coexistence, I was mostly working in the shadows,” Karlmax shared. “I later started a Facebook page advocating for inter-ethnic respect and tolerance. I wanted to do more, but I couldn’t, mostly because I felt like I was doing it alone. I was afraid that it would not be accepted. This changed when I started participating in the Dialogue For Peace Programme. I felt more confident to continue my peace-advocating activities.” He added, “I have also started making contacts to initiate Sport For Peace activities in communities in Kaduna to further promote peace and security.”

Since taking part in the Dialogue For Peace Programme with Abubakar, Karlmax has become a leading catalyst for change. “In every ethnic group, there is good and there is bad. But the activities of the bad are overemphasised so much so that the good are barely noticed. I am now a catalyst for change, and I am grateful to Generations For Peace for giving me a platform to develop my confidence so I can use it to make a difference.”

Much like Karlmax, Treasure Emmanuel Albert is a seventh-generation Delegate and a member of the GFP Implementation Team from south-south zone. Treasure is a member of the Igbo ethnic group and hails from Enugu state in South-East Nigeria.

The landlord of his new flat was an Igbo man from Delta state, which posed a challenge: natives of Delta and other Igbo states have condemning stereotypes about each other. Igbos from other states do not consider the Delta Igbos to be Igbos, leading the Delta Igbos to perceive other Igbos as unfriendly and untrustworthy. 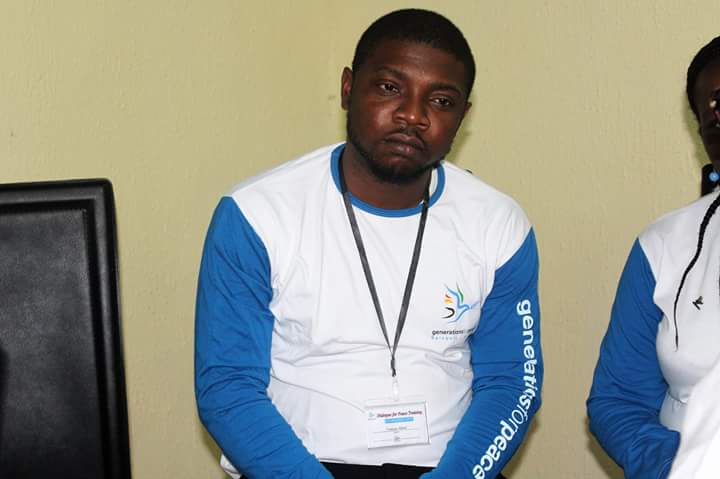 Treasure listens during a GFP Dialogue For Peace session, able to be comfortable with his own identity in this setting.

Treasure was warned not to reveal his identity to the landlord, as that would forfeit any chance of him getting the apartment. “I had to keep my identity to myself, I couldn’t invite my family or Igbo friends to my house. I couldn’t play any Igbo music. I had to dance to the tune of my landlord’s music instead, because I desperately needed a place to live. I would say that is the first time that I felt the negative effects of the stereotypes that come with being born an Igbo from Enugu.”

Prior to that time he had no peacebuilding knowledge or skills and couldn’t find the confidence to reveal his real identity. This was to change in December, 2017.

Treasure was selected and trained as one of the Implementation Team members for the GFP Dialogue For Peace Programme, where he developed the skills to address situations of conflict.

“Because I didn’t have any peacebuilding experience, I had to live a lie. I couldn’t even speak my own language in my house. However, this changed after my training in December. I decided I was going to make a friend out of my landlord no matter his hate for Igbo people,” Treasure said. “So what did I do? I made sure I paid my bills on time, kept the environment clean, and abided by all the rules of using the property. One day I summoned the courage to tell my landlord that I am Igbo. He was amazed – he didn’t believe it, and that was how I convinced him that not all of us are untrustworthy or bad. There are a lot of good ones among us.”

Treasure isn’t the only one from the Igbo ethnic group feeling the weight of stereotyping. Betty Bright Odenero is an Igbo Christian who hails from Delta state. She was born and brought up in Tudun Wada community in Kaduna state, a community that is predominantly home to Hausa Muslims. During the Kaduna Shari’a crisis of 2000, her home was burned down, she lost some of her neighbours to the crisis, and many of her properties were destroyed. She had to completely start her life anew.

For families like Betty’s, the crisis left them with a feeling of hatred towards the Hausa Muslims. “Every time I recall my experience in the Shari’a crisis, I feel pained,” she said, “and I just feel I can never forgive them for the pain they have caused me.”

Betty is 39 and a mother of three. Because of her experiences, she has always held a negative mindset towards the Hausa Fulani people. “I believe the Hausas are the major causes of crisis and violence in Kaduna state. They burned down our house, they put so many families in despair, and for that I just believe they are all the same. They are violent, unfriendly people and should not be trusted.” 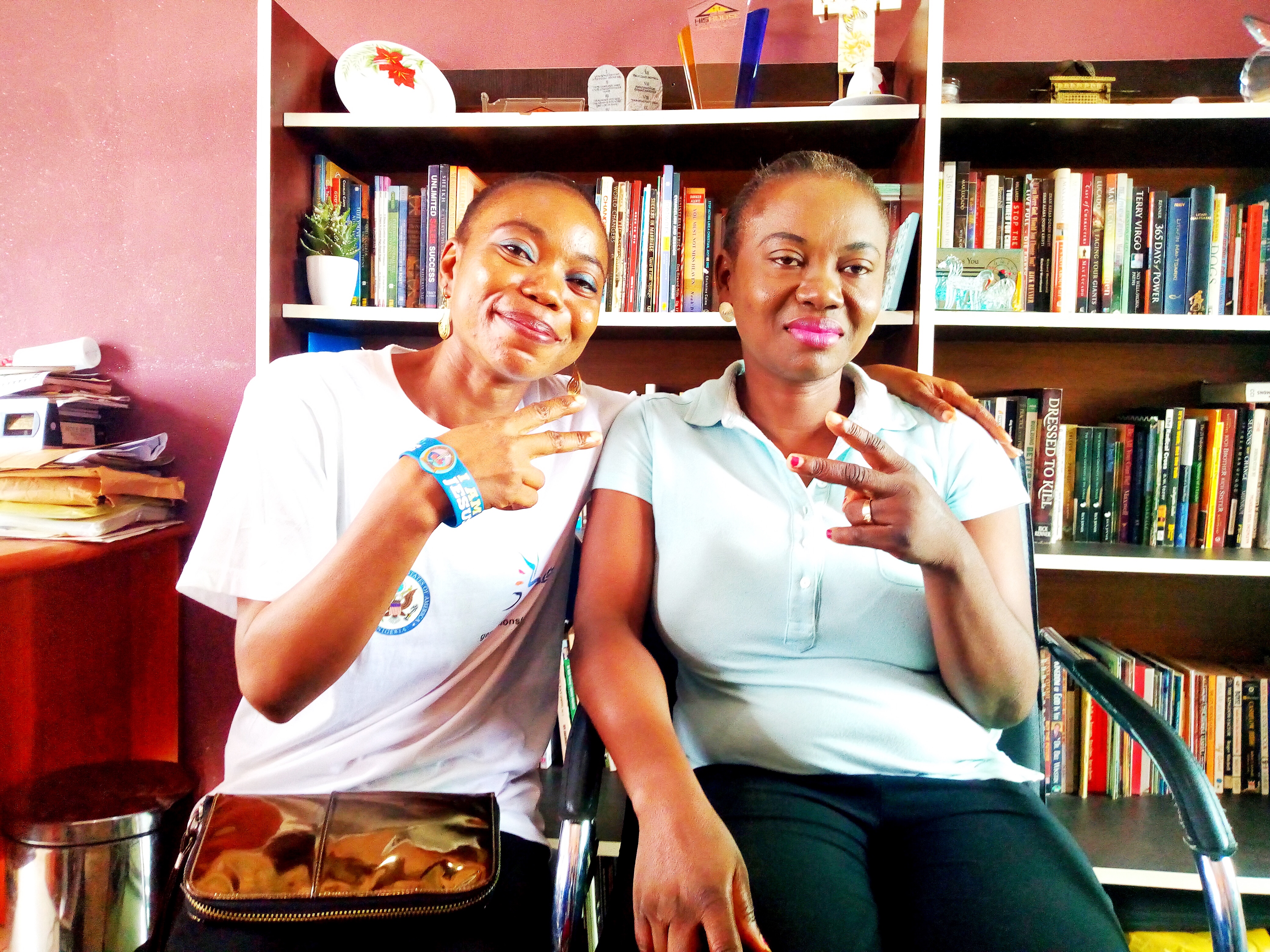 Betty (right) poses for a photo with her friend, Harriet (left)

Although she is not one of the target Participants of GFP’s Programme, she was able to participate in one of the Dialogue For Peace initiatives. She was invited by Harriet Ukperi, a friend of Betty and a Programme Participant from South-south zone of Kaduna state. During the initiative, Betty listened intently to the discussions and even made some contributions of her own. She was surprised to find that she was thrilled by the views of the Hausas – the experience exposed her to the perspective of those on the other side that she had for so long refused to see.

“Attending the GFP Programme was the best thing that has happened to me since the crisis. It gave me the opportunity to see the better side of Hausas and also to heal from the pain of the crisis.” 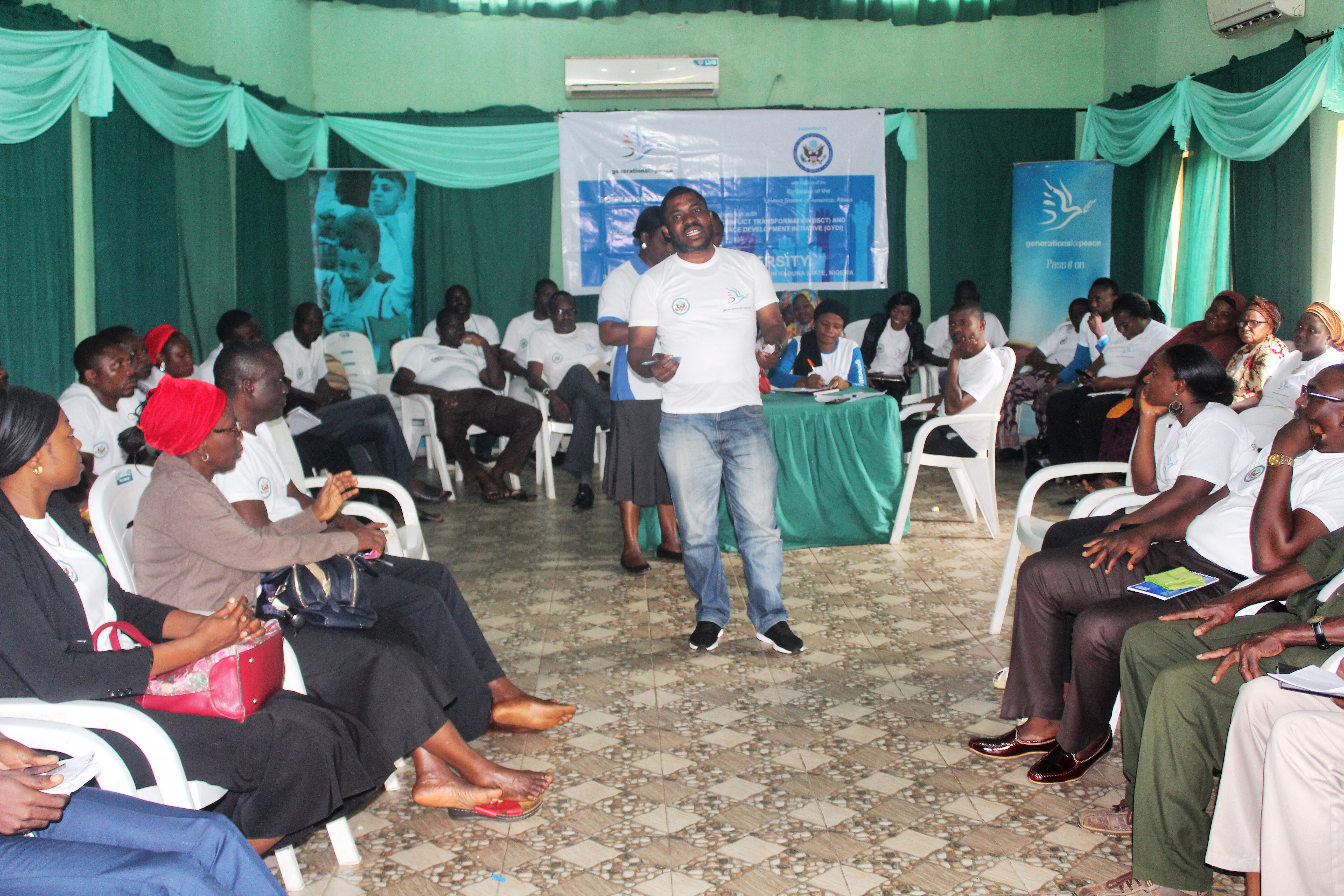 Everyone has the potential to be a peacebuilder and advocate, but only a few actually take the bold step to be the change and inspire others to join them. Abubakar, Karlmax, Treasure, and Betty have might come from different backgrounds and ethnic groups, but they have one thing in common: they have each experienced the effects of stereotyping and have chosen to take a bold step to change the narratives forced upon them.