Choosing Forgiveness over Blame in Nigeria

The attack happened one night after he had returned from giving a lecture at the Kaduna State University, while he was walking from his home in Narayi to visit a friend in the nearby community of Unguwan Maigero. His wife, Laitu, was called to identify his body, which had multiple knife wounds from the attack, carried out by Hausa-Fulani Muslims during the Post-Presidential Election Violence in 2011.

Ten years earlier, in Taraba State in the North East geopolitical zone of Nigeria, Evelyn watched as her home crumbled, consumed by the flames of a fire set by the Jukun ethnic group with the help of their Hausa-Fulani allies during an ongoing crisis between Tiv and Jukun tribes that peaked in 2001. As her home collapsed, the fire continued to spread, moving swiftly over the whole of the property her late father had purchased, where she had been born and raised.

Laitu Babang lost her husband on the 18th of April, 2011. Evelyn Yovenda lost her home a decade earlier. Both were devastatingly affected due to long-standing tribal and ethnic violence that is all too common in Nigeria. 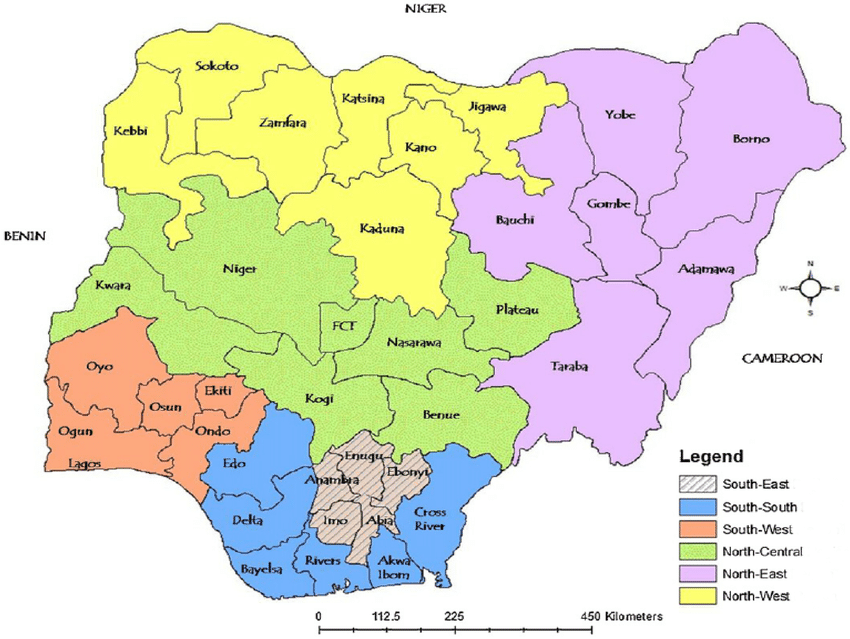 Map of the six geopolitical regions of Nigeria. *Source: ResearchGate

On a continent with an already rapidly growing population only set to continue picking up speed in coming decades, it seems likely that tension and clashes between the opposing ethnic groups across Africa will continue in a similar fashion. The six geopolitical regions composing Nigeria have long faced inter-tribal and -ethnic conflict that often escalates into violent outbreaks amongst the estimated 250-plus tribes coexisting in Africa’s largest national populous. Fulani Muslims, one of the closest in terms of culture and history to the Hausa people, have long fought over land for their herding and laws surrounding their political views, which has caused violence to surface with such tribes as Laitu’s Bajju tribe. Additionally, among the most far-reaching and violent outbreaks are those between the Jukuns and Tivs, the latter of which Evelyn belongs to, which can be traced as far back as 1959 and which tend to revolve around land and political disputes.

Laitu Babang is one of the many citizens of Nigeria who has had to live through the consequences of such conflicts. The murder of her husband left her alone at the age of 46 years with three children, coping with the development of a deep hatred for every member of the Hausa ethnic group. She had resolved that she never wanted to have anything to do with the people who had killed her husband and brought her so much pain. On top of the emotional turmoil she faced, Laitu was also confronted by economic challenges, as her late husband had served as the main provider.

Laitu used to be a civil servant in the Kaduna State government but is currently not working due to the retrenchment of workers by the Kaduna State government. The transition from working to unemployment made life difficult for her and for her children, even resulting in health challenges like high blood pressure. “Every time I remember the death of my husband, I feel so bad, and I wish I could turn back the hands of time so I can see him again.” 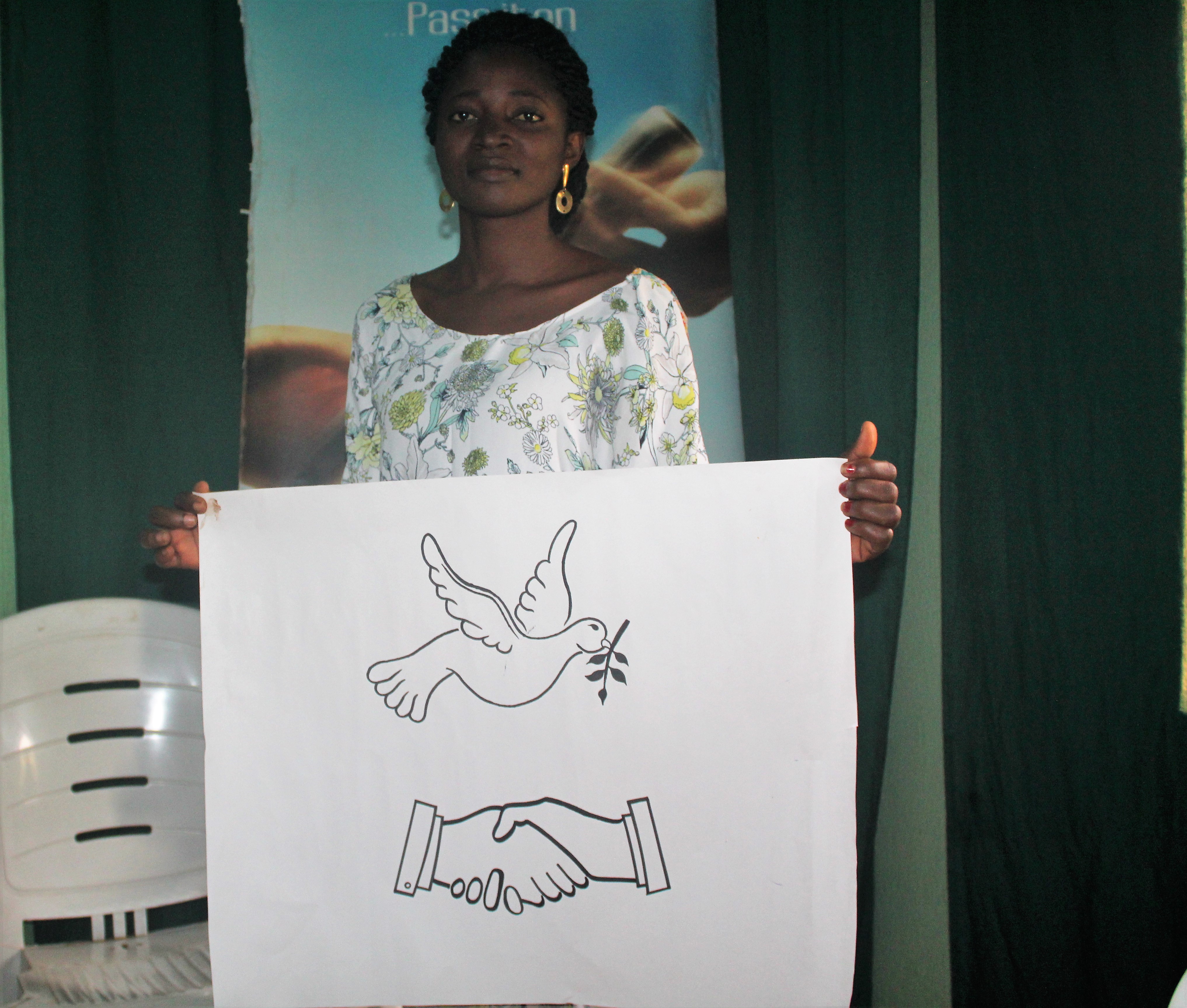 Evelyn holds a sign during a GFP programme session in Nigeria

Evelyn Yovenda, from Taraba State, faced similar challenges. After her home was destroyed due to ethnic violence, she decided not to associate herself with people from other ethnic groups, as she grew up with a set of grievances towards the people of the Jukun tribe. Evelyn’s father had been forced to relocate the entire family to their native home in Benue State, the region just to the west of Taraba in the country’s Middle Belt zone, because they had no place to stay safely in the home she had known all her life.

After what happened to Evelyn, she decided never to forgive the people of the Jukun tribe due to the atrocities they inflicted on her family. Six years ago, she relocated from Benue to Kaduna State following her acceptance into Kaduna State Polytechnic. The youngest of five children, she lost her parents after the family’s relocation to Benue State. 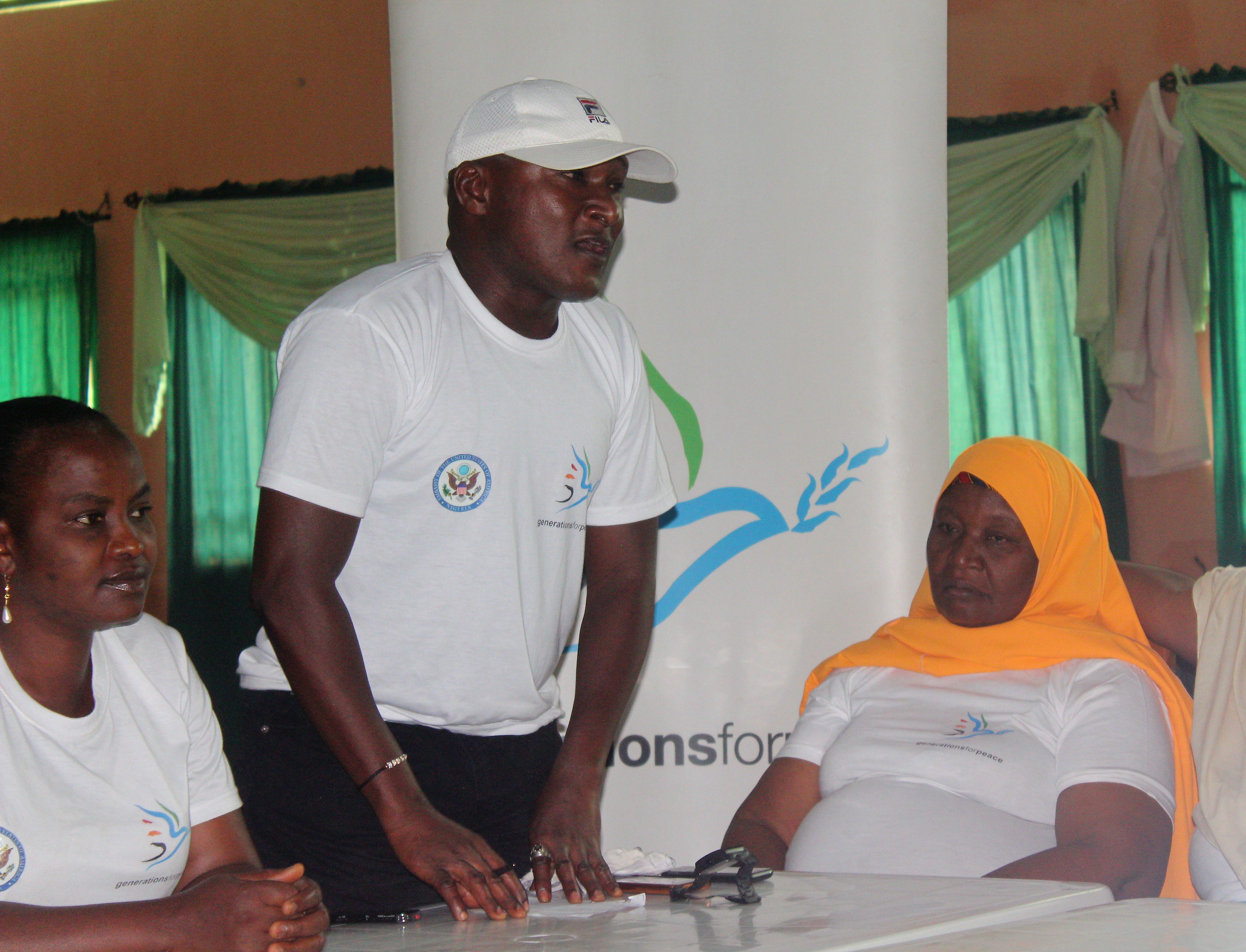 Bege Tanko, Evelyn’s friend and coursemate at KSP who introduced her to Generations For Peace speaks during a session

Evelyn was first introduced to Generations For Peace by her friend, Tanko, a fellow coursemate at Kaduna State Polytechnic and a Participant in Generations For Peace’s Dialogue For Peace Programme. She joined him as he attended one of GFP’s community-led initiatives, where she witnessed and participated in activities which brought together Participants and Beneficiary Community members consisting of people from different and even opposing ethnic groups, which she had previously thought to be an impossible endeavour. During the programme’s sessions, Evelyn and the Participants around her had the opportunity to interact, discuss, and engage in activities that promoted tolerance, respect, and understanding – all of which overpowered the differences between each person there.

Now a final-year student of Kaduna State Polytechnic, Evelyn was amazed and touched by the Dialogue For Peace Programme, through the unity she experienced amongst these different ethnic groups. She believes it is that understanding that has relieved her of the negative and unforgiving feelings she had for the Jukuns and their allies in Taraba State. As her emotional wounds began to heal, she resolved to be a volunteer and promote peaceful relationships amongst students from different ethnic groups in her school and her community.

Evelyn was not alone in finding acceptance of those that she had once blamed for her hardships. Laitu was selected to join Generations For Peace as a Participant in the organisation’s Dialogue For Peace Programme (DPP) in Kaduna State. Driven by the conversations she witnessed and engaged in, she never missed any of the dialogue sessions. In fact, after only the fourth inter-group session, Laitu was so affected by the discussions that took place between different ethnic groups that she began to feel a shift of her outlook toward Hausas – the group that had been responsible for the murder of her husband. Slowly but surely, she came to realise that not all Hausas are the thugs that caused her so much pain, and that more often than not, they did not deserve the hatred she had reserved for them. 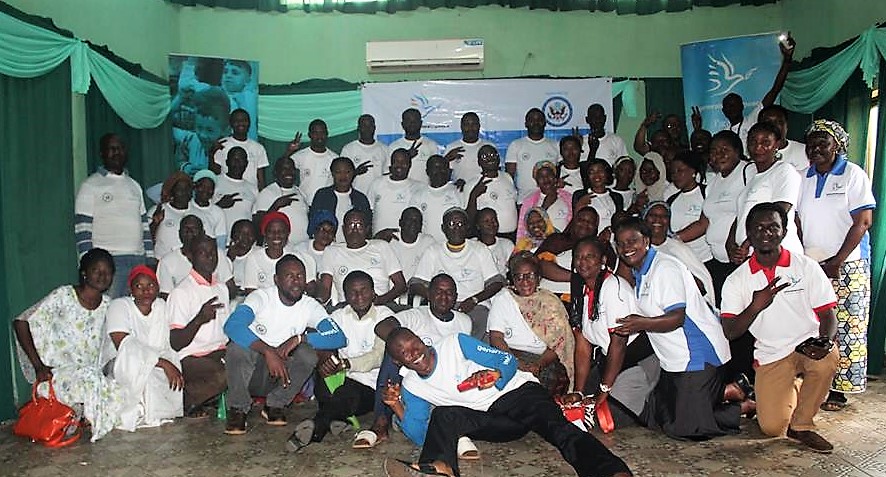 “In the past, my parents used to be close with the Hausas – my father went as far as giving out a piece of land to a Hausa man. But since then, so many things have gone bad,” Laitu explained. However, she went on to describe a key message of GFP’s Dialogue For Peace programme, highlighting the extent of its impact on her personally, and on her community:

“It’s time now that we make a change on how to relate with people from other ethnic groups other than ours. We all need each other, no matter our differences.”