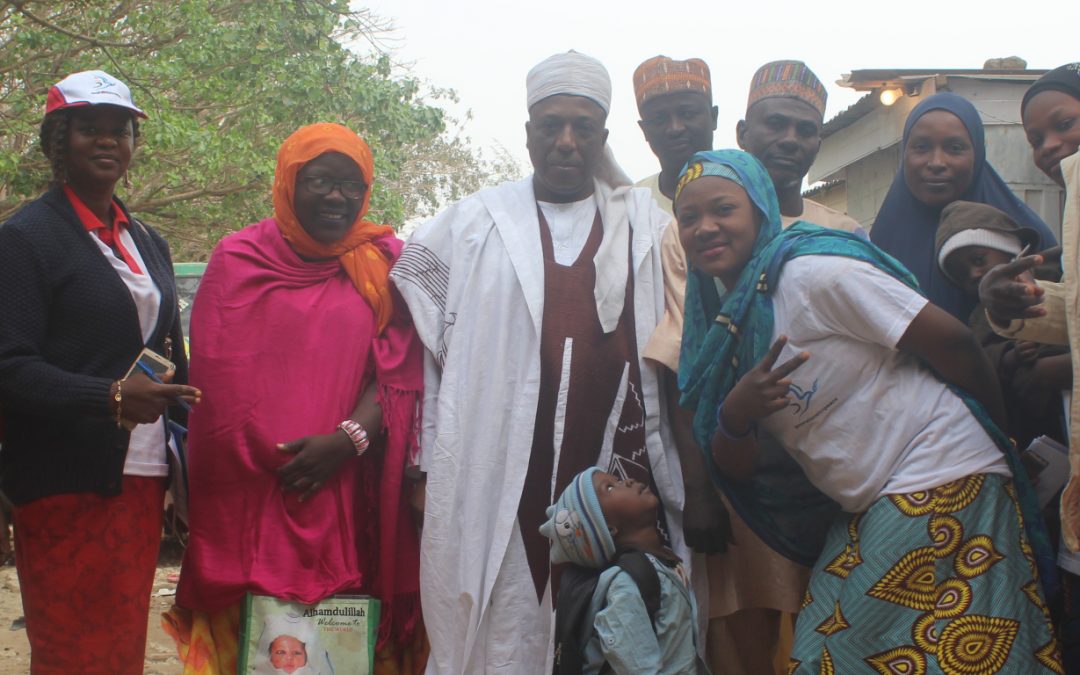 The Sharia Crisis of 2000 has left many families in devastation, even 18 years after the episode. In April, we posted stories of some Delegates who lost loved ones to the crisis. Just like them, many others too lost loved ones to the violence that arose. Abubakar Isah and Umma Muhammad Garba, Participants in Generations For Peace Advocacy For Peace Programme from the Rigasa and Unguwan Rimi communities, are two of such people. 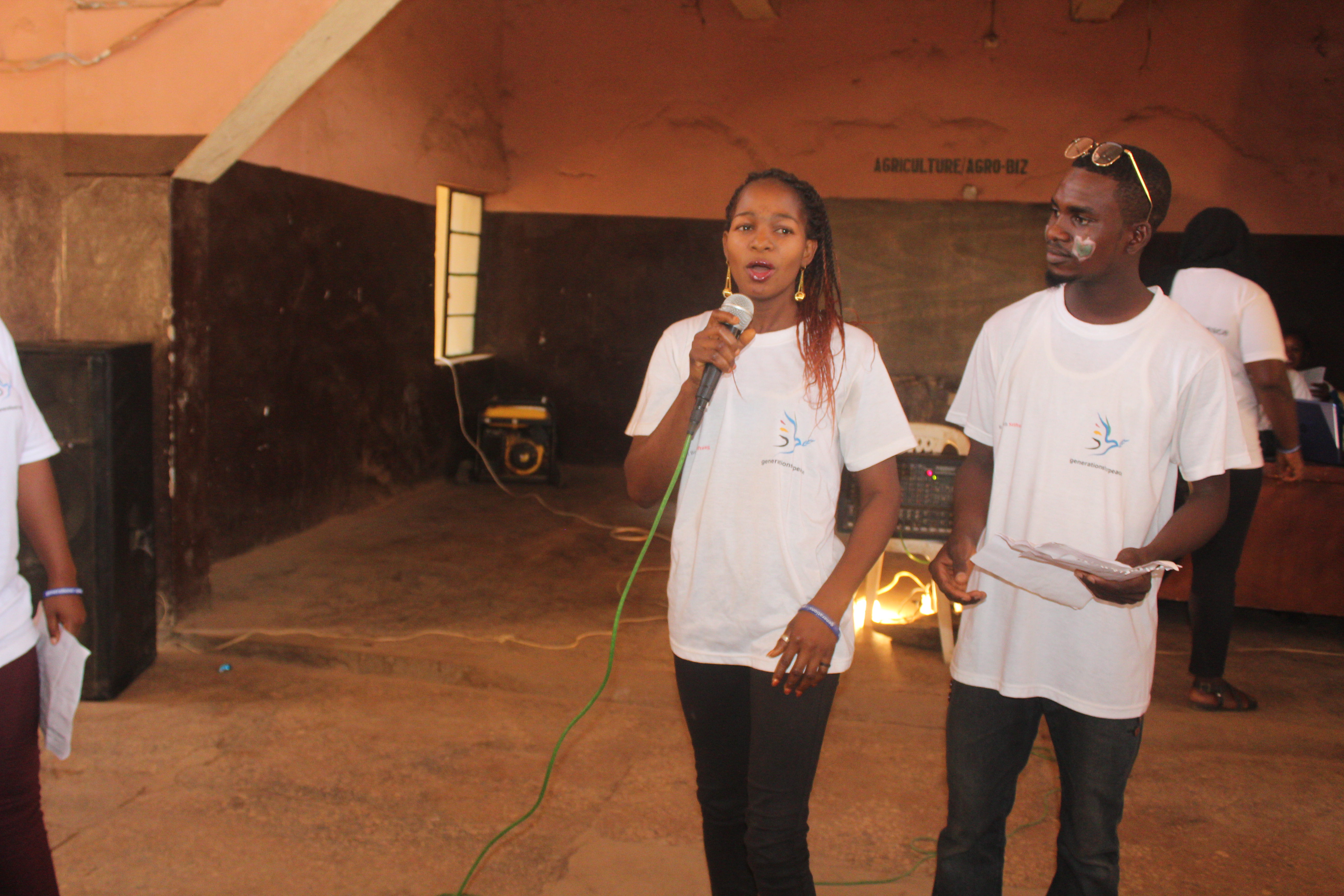 Abubakar, right, during an inter-group session in a GFP Advocacy For Peace session in Nigeria

Abubakar is now 22 years old and grew up in a happy and comfortable family of seven. Although he wasn’t born with a silver spoon, his family was united and content. However, their familial joy and happiness was upended during the Sharia Crisis in 2000.

It was on a Monday during the Crisis when rioters visited Abubakar’s home, asking for his father who wasn’t home at the time. The oldest child in the family, who was then studying Law in Ahmadu Bello University – Zaria, was beaten and then slaughtered right in front of Abubakar and the rest of his family.

He was only 4 years old at the time he witnessed both the brutal killing of his brother and the destruction of his home, set on fire set by the rioters.

“We were the only Muslims staying in our area in Sabon Gari community then, and so when the crisis started, we were confused on who and where to seek refuge,” Abubakar recalls. “We were still in this state when our neighbour, a Christian pastor, took us in and protected us. Even though he was protecting us and his house was our sanctuary then, I still didn’t trust him and didn’t feel safe until we finally left the community.”

Apart from the emotional effect of losing his brother, the Crisis also affected his family economically: when his father lost his job two years after the crisis, he couldn’t seek for another job elsewhere, as all his papers were destroyed in the fire that burnt their house.

“My father lost his job and couldn’t take care of the family anymore, and my elder brother whom would have stepped in to take care of us was killed. So, I had to drop out of school and take on menial jobs to help support my family. My once happy family was now filled with sorrow and poverty, and who better to blame than the Christians who caused us all these troubles? I couldn’t forget the image of my brother being slaughtered, and this had made me build so much hatred for Christians over the years.”

The loss of his brother caused a chain reaction of other tragedies that caused him to struggle with trusting Christians. “Whenever Christians are mentioned, the only thought that comes to my mind is the incident in 2000 and the image of my brother being slaughtered flashing before my eyes,” Abubakar says. “Since then, I have promised to have nothing to do with Christians again in my life. I think my wish almost came true, as we moved to Rigasa community, which is a predominantly Muslim community.”

The physical division in Kaduna State between the two major religions – Christians and Muslims – started after the Sharia Crisis of 2000. The Muslims moved to the northern side of the State while the Christians were predominantly in the south. This division caused a strain on relationships on both sides of the religions. It was on this basis that Abubakar’s family moved to the Rigasa community up north.

“Because my family couldn’t afford to pay my school fees anymore, I started selling petrol in black market, and I used the proceeds from this business to enroll myself in Rigasa Students Association (RSA), where I finished my primary and secondary school. This was where I met Rabiu Auwal, who invited me to be a part of a peace-building programme. At first, I was sceptical, especially when he mentioned that other Christian-dominated communities will also be participating in the programme, but I decided to keep an open mind to attend and see how it goes.” 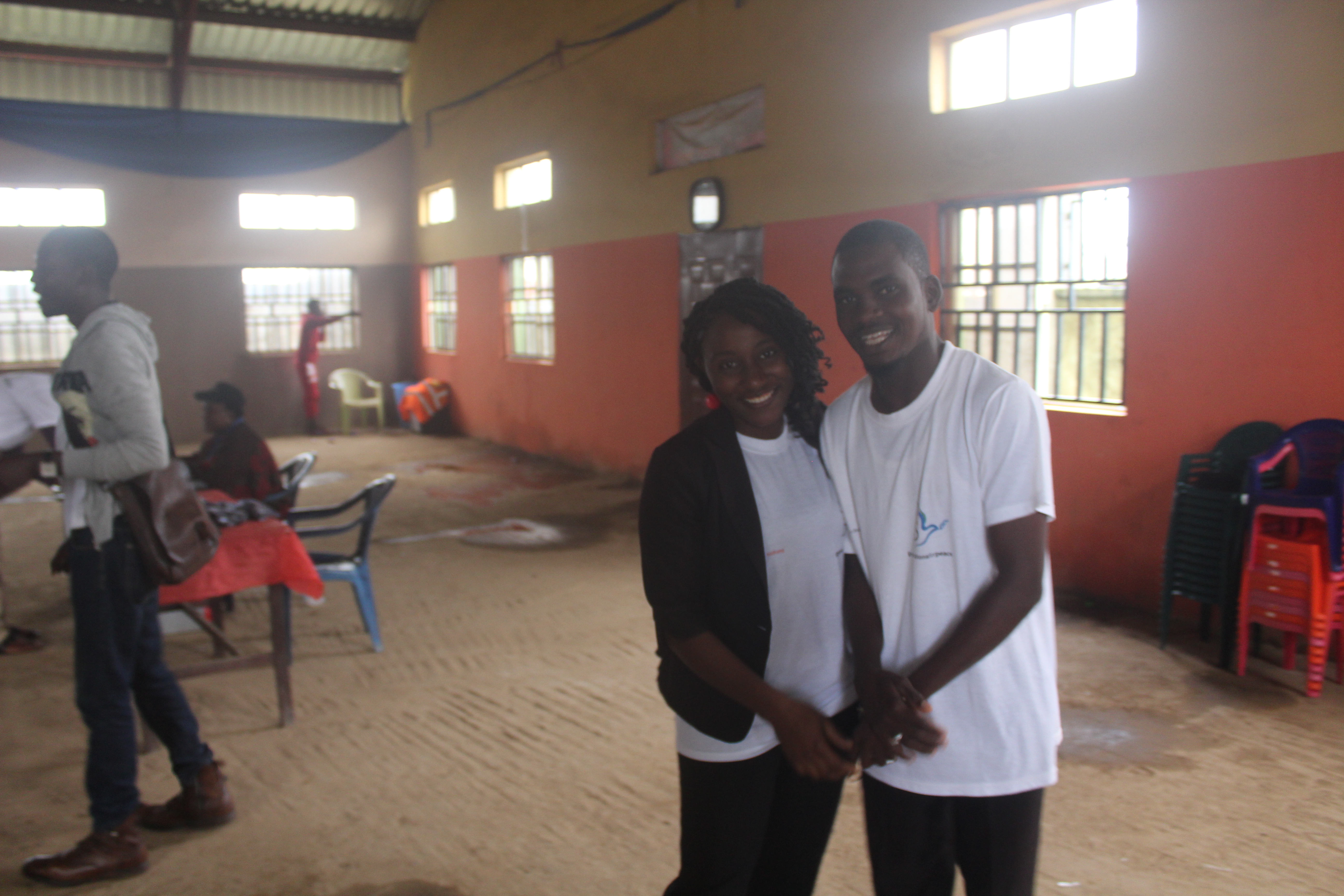 Abubakar, right, stands with Deborah, left. Despite their differing religious backgrounds, the two have become close friends through GFP’s Programme in Nigeria.

He goes on to explain, “At the first session in Ungwan-Rimi I didn’t participate much, I was mostly observing. It was the second session in Maraban Rido community that finally changed me. There, I met a Christian friend, who most people now call my girlfriend as we both pay each other visits and even check up on one another on phone. It was the team-building activity that put me and Deborah Koni Sheyin, a Participant from the predominantly Christian Maraban Rido community, together. We were paired and asked to share a story of how our identities have affected us positively or negatively.

“Coincidentally, in her sheet she wrote, ‘I am a Christian, but I am not a terrorist,’ and I wrote, ‘I am a Muslim, but I am not a terrorist.’ That was how we started talking, and I shared my story with her, and she said something that really touched me. She said, ‘Although I have never experienced something like this, I do empathise with you. No one deserves to go through something like this.’”

Abubakar is not the only one to experience trauma and an exciting turn-around like this.

At only 8 years old, Umma went to school on a Monday, but when she returned home no one was there. She went to her neighbours to ask the whereabouts of her family. That was when she was told that her uncle was killed. This news left her devastated with so much bitterness towards Christians.

“When I heard that my uncle was killed during the crisis, I was sad and angry at the same time. Since then, I vowed never to trust them again. I just disliked having anything to do with them.” 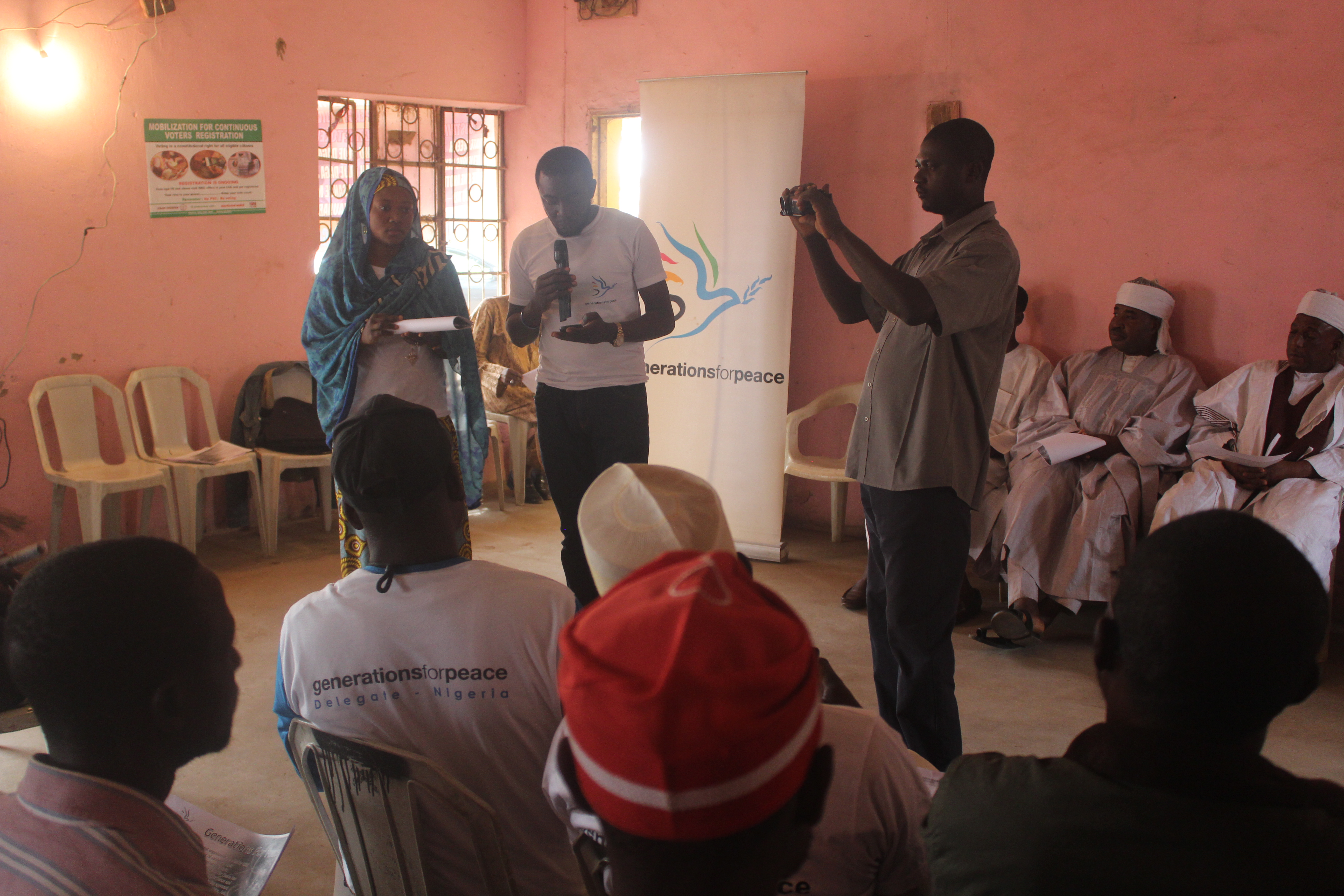 Umma, left, facilitates a session during  GFP’s Advocacy For Peace Programme in Nigeria

Umma is now 24 years old and married with a son. She still finds it hard to be friends with Christians. “I have neighbours who are Christian students, but I don’t allow them carry my son – I don’t even dine with them.”

She was first invited to join Generations For Peace by Hassy Bonnet, but when she asked her husband to join her, he refused to go. So did her mum. When Timothy B. Sajoh, a Delegate from the community, invited her again, she decided to give it a try.

“I told my husband I will attend twice, and if the activities are non-beneficial, I will stop attending.”

Although she was absent in the first session, she made it to the second session, and third. At the third session in Hayin-Banki community, she said she was so thrilled that she had to call her husband right away.

“I said to him, ‘if only you are in the neighbourhood, I would like that you come witness the activities of the programme.’ But he wasn’t in that area, and he said I can keep attending and wished me good luck. So did my mum.” 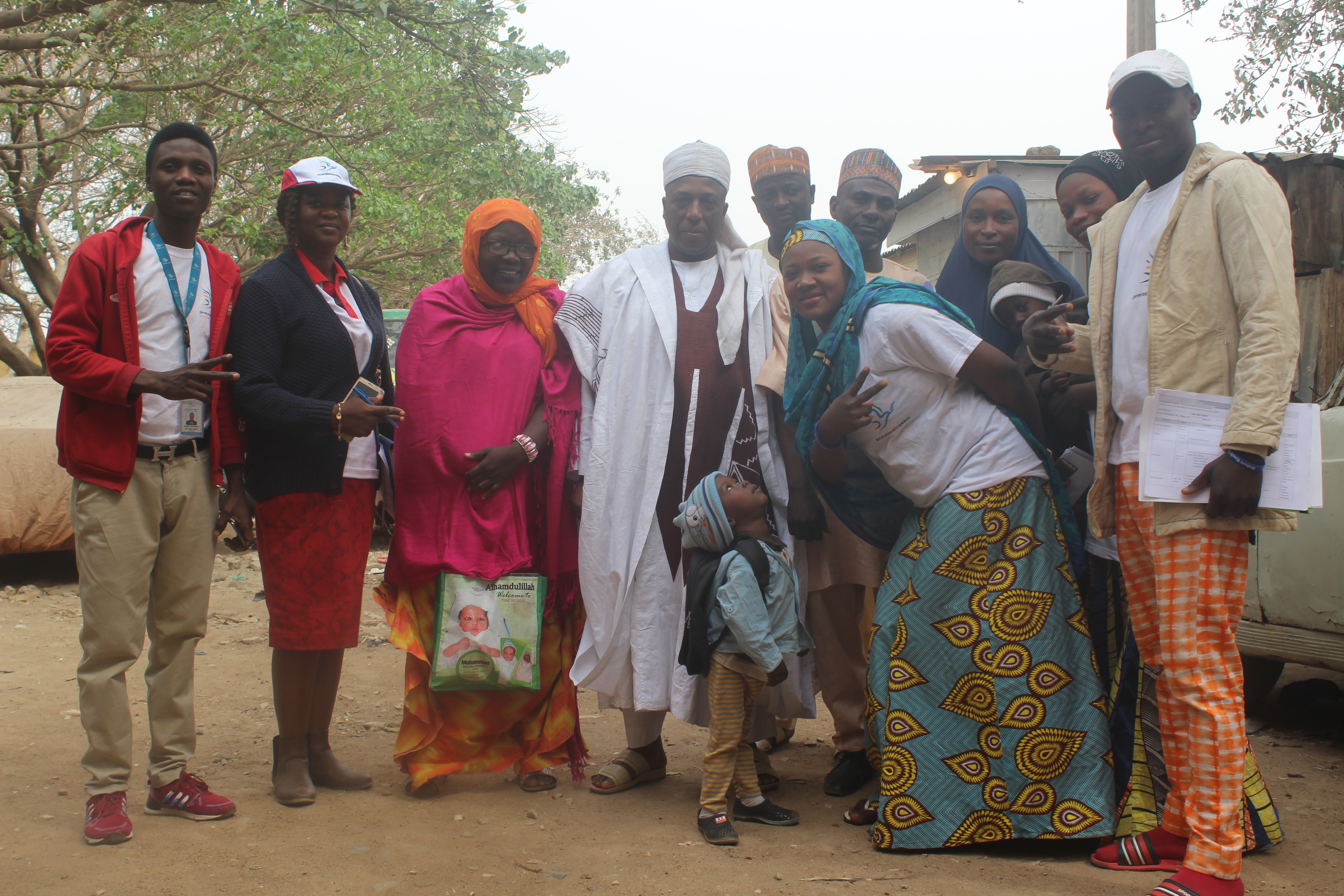 A group from GFP’s Advocacy For Peace Programme in Nigeria, including Umma, pose for a picture together.

Because of the Programme, Umma says, “I now have a better relationship with my neighbours: I can confidently leave my son with them when I am going out, and this is all thanks to Generations For Peace and the Advocacy For Peace Programme. I feel different being able to trust and even be with Christians again.”

Abubakar said, as well, “I am calling on all youth out there to keep sentiments aside and treat everyone with kindness and respect irrespective of their religious or ethnic background.”

Abubakar and Umma’s calls are simple, but their impact – if followed – is deep and far-reaching. We have learned that from the Advocacy Programme he is a part of, and continue to work to advance that outcome through each session, activity, and event.