Choosing Peace over Violence in Nigeria 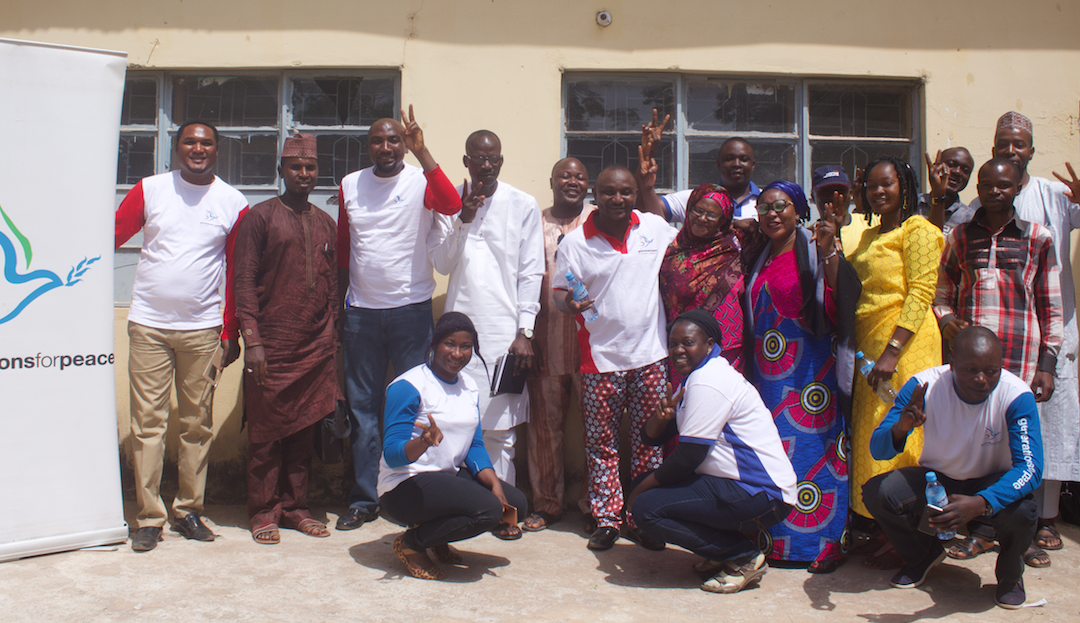 He was ten years old when the riots began.

He watched and listened to the mayhem and murder from inside his home in Kaduna, Nigeria, where his mother forced him and his four older siblings to remain while the political and religious riots escalated into the internationally-recognised Sharia Crisis of 2000 just outside the confines of their walls.

“Hearing and seeing how people were being slaughtered…made me to be so scared that I felt I was going to lose my family and friends if things should continue that way.” Tijjani Alhamin, now 28 years old and with a family of his own, including a young daughter, Hikram, reflected on the experience of being a Muslim living in a community of mixed ethnicities and religion. “As a result of this crisis and so many other things, we had a curfew enforced in Kaduna by the state government. One time, I had to violate the law, not because I wanted to, but because I discovered we were out of food, and we were already starving. So I had to do what I needed to do.”

While northern Nigeria is predominantly Muslim, the city of Kaduna, nestled in the middle of the region, maintains a more diverse population, nearly half of which identifies as Christian. When the region’s government began to expand Sharia Law, Islam’s legal system, from personal and domestic law to criminal law at the turn of the century, the city of Kaduna, with its high population of Christians, witnessed protests that led to violence between people of the two religions, resulting in the deaths of up to 5000 citizens of Kaduna. Tijjani, still a child, witnessed too many of these first-hand. 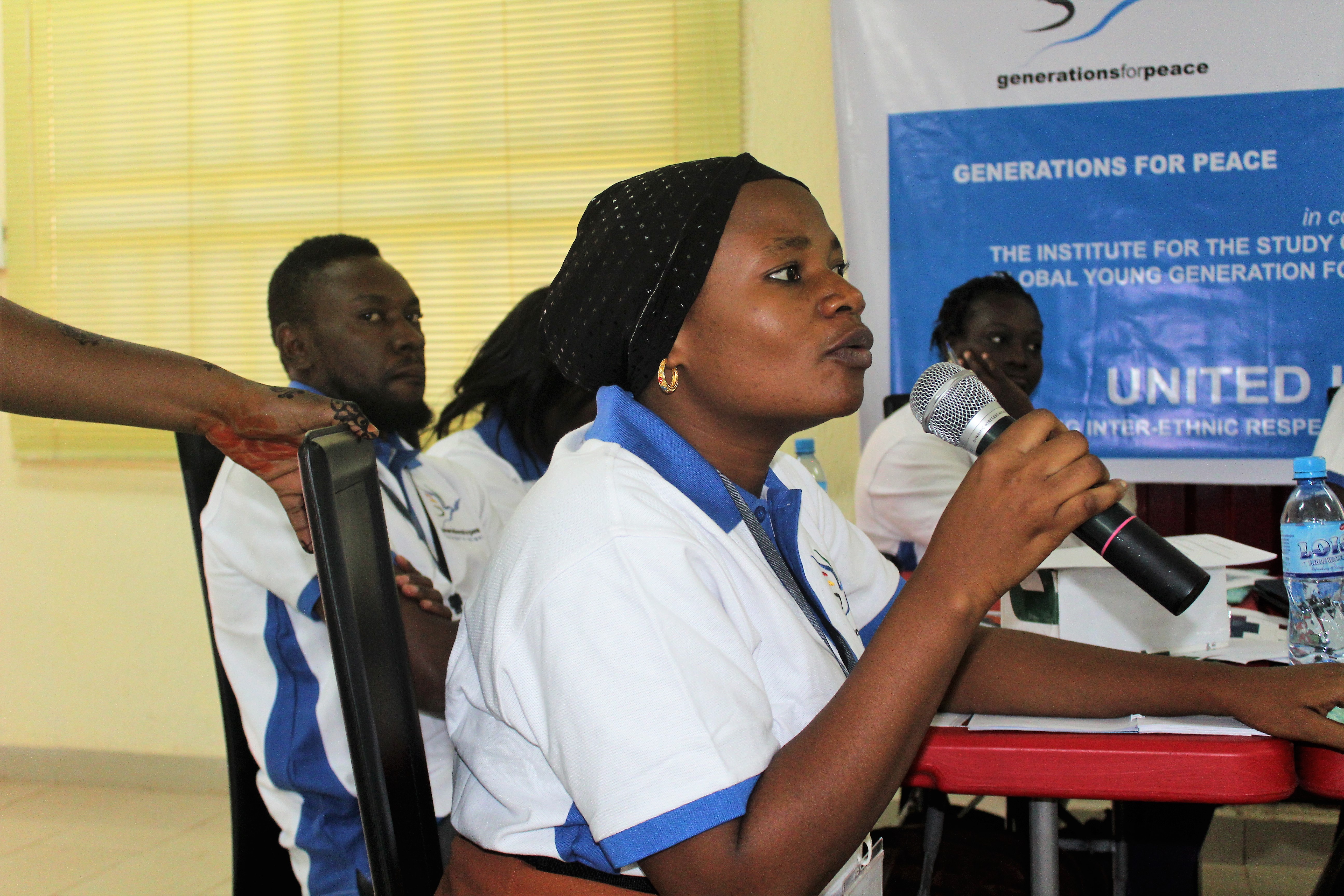 Itama speaking at a Generations For peace Dialogue For Peace session in Kaduna, Nigeria

Just a decade later, in a different neighbourhood in Kaduna, a young woman watched through her window as a man stoned to death in his front yard. Itama Ohuelgbe, 22 years old at the time, will never forget that image.

As a minority Christian in her community, she and her family were refused refuge with their neighbours during the riots that followed the 2011 presidential elections due to their difference in tribe and religious beliefs and were forced to escape the violence to an area where they hoped to find refuge in military barracks.

“I so hated these people that did that,” Itama, now 28 years old, remembered the night they fled. “They were our neighbours, and we were lucky to escape that, but it took a long time to begin accepting these people again. I still have members of my family who still nurse those feelings and don’t want to have anything to do with these people anymore.”

The 2011 presidential elections in Nigeria saw the victory of Goodluck Jonathan, a Christian whose support lay almost entirely in Nigeria’s southern region. His victory sent the 12 northern, Muslim-majority states into chaos. 40,000 men, women, and children were displaced due to the damage, violence, and general safety concerns across the region. The politically-motivated violence touched all 12 northern states in the wake of the 2011 presidential election, leading to the burning of churches, mosques, homes (even that of then Vice President Mohammed Namadi Sambo), the Kafanchan market, and a devastating death toll of over 800.

Tijjana and Itama could not have been more different: a Muslim and a Christian, a man and a woman, a young child and a grown adult witnessing terror that most of us will never know. But despite these differences, they each have something in common:

“Because of all that I have experienced and the future I want to see, I began to develop a passion for peace.”

“With all what I have seen and the future I want for my daughter, I have developed the act of voluntary actions to humanity.” 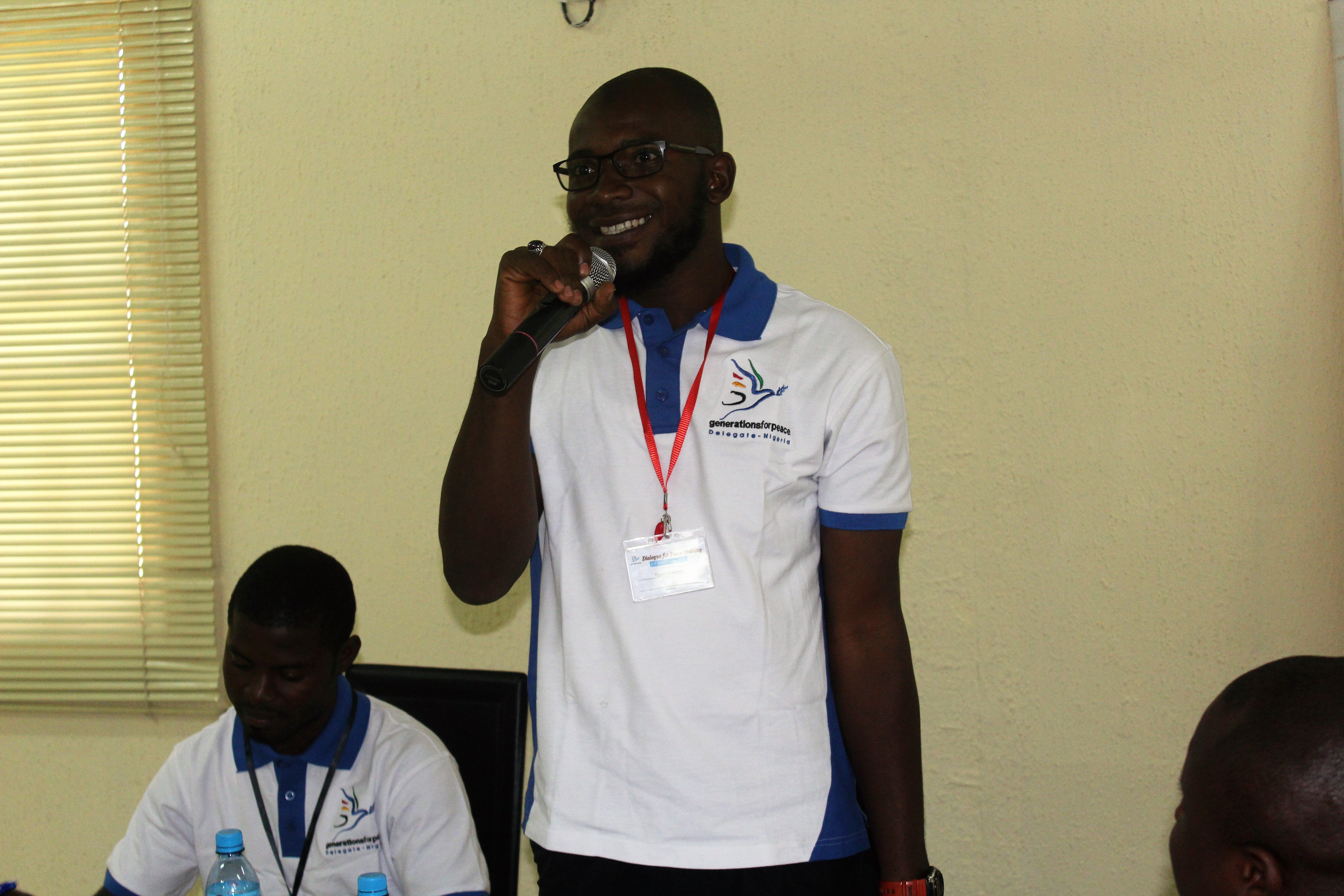 Tijjani participating in a Dialogue For Peace Programme in Kaduna, Nigeria

In the wake of the crises that placed the northern states of Nigeria in a chokehold in 2000 and 2011, violence continues to persist, particularly between Christians and Muslims. In the first few months of 2017, some estimates put the death toll of victims of the tit-for-tat bouts of violence at over 200, with indications that another 27,000 have been forced to flee. Around this time, Tijjani and Itama joined Generations For Peace programming in Kaduna State, engaging through dialogue activities with groups of ethnically- and religious diverse youth, and adults to bring acceptance, tolerance, and peace between those of differing and often opposing backgrounds. In the words of Tijjani, he and the others joining the activities were trying to “increase inter-ethnic tolerance and respect amongst different ethnic groups residing in Kaduna State and also to see each other as one irrespective of your religion or ethnicity. What matters most is living as one Nigeria.”

This idea has seeped into every aspect of life for men and women like Tijjani and Itama who have engaged with those outside their own communities through the United in Diversity GFP programme supported by the U.S. Embassy Abuja.

As she attended a local vigilant group meeting as the only woman, Itama looked around and noticed that, even in a setting where different tribal groups were coming together to promote peace, they were all sitting with those from their own backgrounds. How were they to build peace and encourage increased engagement with those outside of their own communities if they could not even intermix when they met to plan how to do so? Her comments on this paved the way for not only the increased interaction between different tribal members in the group, but also for the inclusion of women.

Tijjana has experienced deeper acceptance and understanding of others as well. From familial conflicts to simple conversations with strangers on public transportation, he spreads the word about peace and how every member of society can and must be a contributor in order to truly achieve it fully.

“There is a saying that charity begins at home,” Tijjana shared. He and Itama – despite their many differences and reasons to have conflict with one another – have both taken this to heart, spreading all that they know about acceptance and peace to everyone they meet.