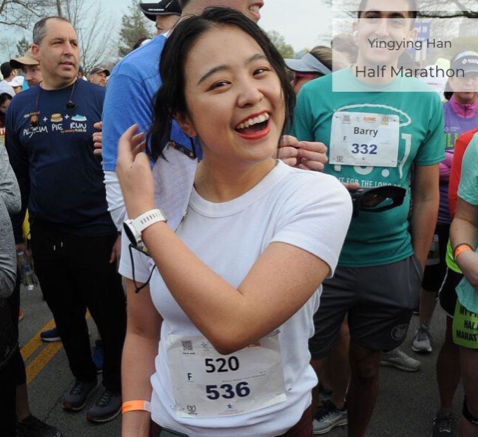 By Meera Shamma, Communications Officer at Generations For Peace

Born and raised in China, 28-year-old Yingying has developed her understanding of community over the past few years, especially since moving to the United States of America and joining the Youth INTERACTS Program. Implemented by Generations For Peace, the Gary Comer Youth Center (GCYC), and the New American Welcome Center (NAWC) at the University YMCA, and in partnership with the Laureus Sport For Good Foundation and the Generation Amazing Foundation, Youth INTERACTS was launched in 2021 to foster interpersonal trust and connection between ethnically-diverse youth in Southside Chicago and Urbana-Champaign, Illinois, where youth often do not have the chance to interact.

With a Bachelor’s degree in Information Resources Management from Sichuan University and a Master’s degree in Library Science from Wuhan University, Yingying is currently pursuing a PhD focused on the digital preservation of cultural heritage at the University of Illinois. She juggles her studies with volunteer work to help her interact with and support her community of Chinese immigrants and Chinese Americans, encouraging them to integrate and help them feel a sense of community. “They all moved to the United States from China for multiple purposes like study and work. They faced similar challenges like racism and language barriers. Many Chinese immigrant children were born in the United States, and their children are Chinese Americans. The next generation faces challenges like systematic racism and identity crisis,” she explains.

As a Facilitator of Youth INTERACTS and a volunteer with the NAWC, Yingying’s eyes were opened to a world of new possibilities. “When I was in China, ethnicity-wise, I belonged to a dominant group of people – Han people. I do not have friends who are ethnic minorities and barely have a chance to learn about their lives. After I moved to the United States, suddenly, I became a minority, which made me think about my identity. I am an international student, a person of color, Chinese, Asian – all those labels help me to think further and ask, ‘Who am I?’” she reflects.

She joined the Youth INTERACTS Program to familiarize herself with the Chinese American community in her town and to help create a platform for them to integrate with people from other cultural backgrounds. “We wanted to create a safe space for them to share, read, and have fun. Meanwhile, I also did not have many chances to make friends with those communities from different cultural backgrounds. By participating in the Program, I started having friends from the black and Hispanic communities,” Yingying says.

Though she faced some challenges, such as balancing volunteer work with her studies, being an international student in a new country, and difficulties organizing Program events and activities, Yingying says the Program helped her develop on a personal level and enabled her to reach new heights.

Coming from China, where she says that girls do not often participate in sports, Yingying drew inspiration to explore sports from the youth in the Youth INTERACTS Program. “Seeing how those little girls played soccer with other boys in a program I am facilitating, I got power from them. I am now learning to play basketball and soccer with my friends. I just finished my second half-marathon running a few weeks ago in Chicago,” she says.

Yingying is set to finish her PhD in two years and is working on a co-design project with Chinese American youth, many of whom are Youth INTERACTS participants, towards preserving Chinese American culture in the United States. She continues her work as a volunteer with the NAWC as a Community Navigator, connecting services and resources at NAWC to the Chinese community in her town.

Reflecting on her participation in the Youth INTERACTS Program, Yingying says she is proud to have been a part of it. “Youth INTERACTS plays an essential role in getting kids from different backgrounds to play together. They are no longer segregated in their environments. Instead, they talk to each other, hug each other and play sports with each other,” she says.

“Last but not least, my experience in the Program helps me to think further about how to work with people from different cultural backgrounds. To fight against white supremacy in this society, we must build solidarity among different underrepresented communities,” she concludes.