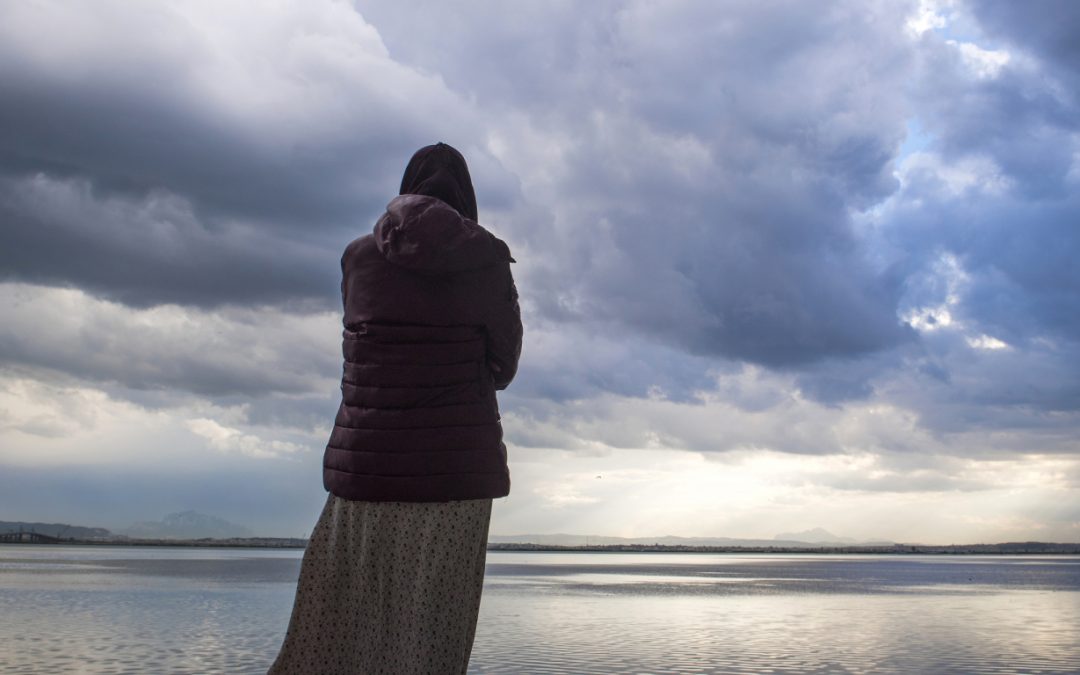 Tunisia’s ‘Jasmine Revolution’ was triggered by the dire economic situation, corruption and political repression faced in the country. But it was the shocking death of Mohamed Bouazizi, a 26-year-old man, that inspired demands for reform. Mohamed, the sole provider for his family, was a fruit and vegetable seller but unable to obtain a permit, he was often forced to pay bribes to keep his livelihood going. The details of what followed are disputed to this day; however, on 17 December 2010, a police officer is said to have confiscated his goods, which led a frustrated Mohamed to go to the municipal office to file a complaint. Nobody would speak to him. A short time later a desperate Mohamed returned to the building and set himself alight; he did not survive.

Although he would never know it, Mohamed’s death sparked a series of uprisings, not only in Tunisia but across the Middle East and North Africa. The Tunisian Revolution (2010 – 2011) eventually ensured the end of President Zine El Abidine Ben Ali’s 23-year authoritarian rule. But while his fall removed an immediate obstacle, many issues including poverty, unemployment, marginalisation, and insecurity, have continued to fuel instability and a lack of hope for the future, which in turn have increased the risk of radicalisation among vulnerable youth.

In fact, reports by the United Nations and Soufan Group, state that between 6,000 and 7,000 Tunisians – mostly men and women between the ages of 18 and 35 – have joined jihadist organisations in Syria, Iraq, Libya, Yemen, and Mali as foreign terrorist fighters. This figure is more than twice the number of foreign fighters from Saudi Arabia, as per the graph below. 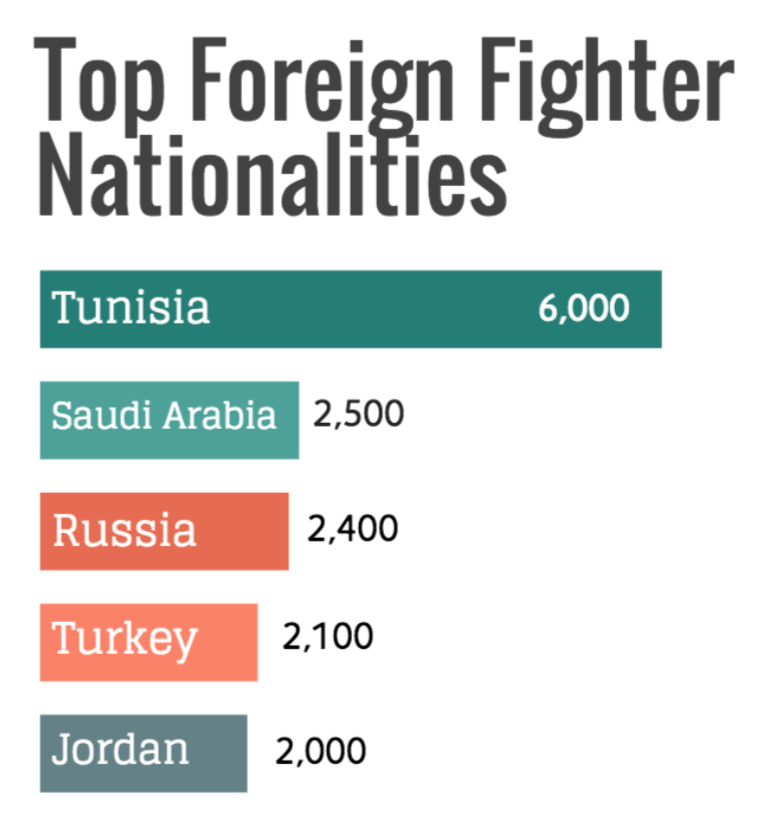 A story of devastating loss.

“The date of 3 August 2014, will remain forever etched in my memory. That was the day I found out my brother had died fighting for Da’esh in Iraq.”

Losing your sibling is hard at any age. Losing him in such brutal circumstances is unimaginable. When Farah remembers her brother Khaled, she looks back fondly on the young man who enjoyed hanging out with his friends, dancing, and above all, having fun. He loved sport, and his dedication earned him a black belt in taekwondo. This is the brother she knew. This is the brother she will always cherish.

“My brother and I grew up in a normal family. My father studied in Russia to become an engineer, and my mother is a high school teacher in Tunis. My brother lived a life like many young people here.” When he was 19 years old, Khaled started to hang out with a new group of friends, and little by little his past life slipped away.

“After obtaining his baccalaureate, he secured a place at a university in Tunis. He was always with his [new] friends at the mosque, and he started to grow his beard. A year later, I joined the same university; I always saw him with those people, isolated from the other students.”

While his behaviour with Farah and her mother remained the same, over time Khaled’s relationship with his father broke down. “There was more and more conflict between them. My father did not want him to meet these people or go to the mosque with them. My brother told him that he was free to do what he wanted,” Farah says.

After some time, Khaled moved into an apartment with his new friends. Sometimes, during this period, he would say, laughing: “One day I will go to Syria, you’ll have to meet me there.” Farah did not take him seriously. She now realises this was a sign of things to come.

Khaled’s behaviour changed rapidly in the weeks leading up to the fateful day he joined Da’esh. “He talked to me less and less in the corridors of the university, and when he spent the weekend at home, he was always in front of his computer. I later learned that he was preparing for his departure to Syria via social media.”

The situation reached a critical point when Khaled was nowhere to be found during a major exam week for students. Farah instinctively knew something was wrong so she contacted her mother and they tried to reach him by phone – he did not answer. “After four days without any news from him, we searched his room and found a six-page letter. The first page explained his motivation for joining Da’esh; the other five were addressed to each family member.” Khaled left Tunisia to join Da’esh on 28 November 2012.

Several weeks passed with no news, then one day Farah received a message: “I felt relieved, but at the same time frightened because I knew deep inside where he was.” Speaking to Khaled on Skype for the first time since he fled was a nerve-wracking experience for Farah. When he appeared on the screen, he asked her to cover her head. She silently questioned his request; perhaps, he was not alone she thought.

Although Farah and her family were able to stay in touch with Khaled via Skype when he was in Syria or Iraq, it was an emotionally traumatic experience for them. Each time they spoke, they pleaded for him to return home: “Sometimes my mother and I wept in front of the camera and asked him to come back.” One day her father broke down during one of their calls – it was the first time Farah had seen her father cry. Upon seeing his father distressed, Khaled responded: “Why cry? Anyway, I’ll die one day or another.”

Farah’s brother was killed three years ago, and over time her grief has transformed into anger against those she believes manipulated her brother. “How can a person with a normal life away from religious or political [ideologies] change so quickly?” she asks. Although talking about her experience is important to Farah, she explains that it is hard to broach this subject in Tunisia without feeling judged.

But Farah is determined to work towards a more peaceful future and is supportive of initiatives that serve this purpose. In fact, she recently heard about Generations For Peace through her students who volunteer with the organisation. Since learning about its mission, she says: “If their actions can save at least one young person from violence and radicalisation, it is already a very beautiful and great victory.”

*Names of the actual individuals have been changed to protect their privacy.

Generations For Peace (GFP) launched a new programme in Tunisia – Youth Resolve: Strengthening Youth Resilience to Violent Extremism in Tunisia through Positive Sport and Arts Alternatives – in partnership with the Tunisian Youth Development Academy, the Ministry of Education and the Ministry of Youth and Sports. Volunteers engage with youth, community members and local government officials in long-term capacity-building and innovative sport and arts-based behavioural change activities, in efforts to reduce sympathy and support for violent extremist organisations. The programme also aims to improve relationships between communities and government entities, and assist in the development of positive alternatives to violent extremism. Head over to our news section to read the full press release.

In further news, GFP also signed its first ever agreement with the United States Institute of Peace to implement a two-year research project led by the Generations For Peace Institute, aiming to enhance knowledge about programmatic interventions that bolster individual and community resilience to violent extremism in Tunisia.