Drawing Dreams in the Sand: the Pursuit of Hope 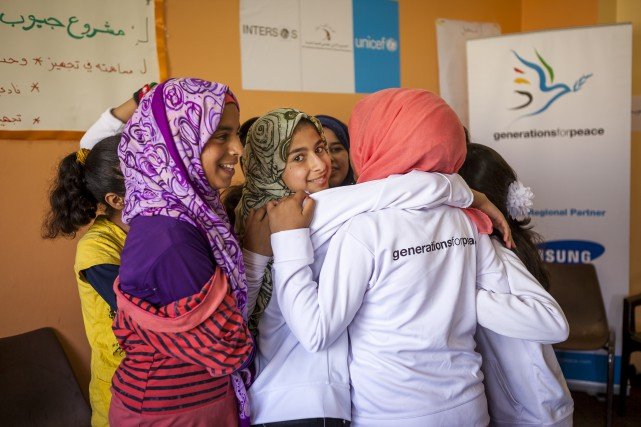 When Amira was a little girl in Homs, Syria, she dreamed of becoming an architect. She would play on dusty construction sites and envision majestic buildings sprouting from the ground, drawing her dreams in the sand.

Her life has changed greatly since those days, and over time her dreams began to slowly disappear, as though they never belonged to her at all.

“We’re Bedouins,” she explains. “In our tribe we get to go to school until they’d say, this girl is now a grown up so she has to get married. My Dad made me leave school when I was in fifth grade – I was 12 years old and I wanted to keep studying, but I had to leave against my will. This is tradition.”

Amira married at the age of 14. Today, at 17 years old, she is a divorced mother of a seven-month old. Nevertheless, she remains focused on carving a promising life for her and her daughter.

“One day my daughter will grow up, and she’ll want to go to school. She’ll need all the support and strength that I can give her in order to succeed. So if I don’t have the strength now, how will I give it to her?”

Amira’s life, like millions of others in Syria, became turbulent over the past four years. Syria’s civil war has resulted in approximately 220,000 deaths (UN, 2015), and more than 4 million people are now refugees in neighbouring countries (UNHCR, 2015). Amira and her family were forced to flee to Jordan in 2012. Her father passed away in Syria. Today, she lives in Mafraq with her mother, sisters and daughter. The city, which is 80km north of Jordan’s capital, Amman, is one of the many host communities that are bearing the burden of hosting large numbers of Syrian refugees.

It is easy to see how much Amira craved close friendships – girls she could be herself around, people she could trust. Although her recent experiences have been overwhelming and traumatic, Amira feels she may finally have a chance to start again.

In early 2015, Amira joined the Generations For Peace (GFP) Social Cohesion programme at her local youth community centre. She met other girls her own age, and with their support her underlying educational ambitions emerged once more: “It was all because of my friends here, they encouraged me to go back to school because they all go to school.” 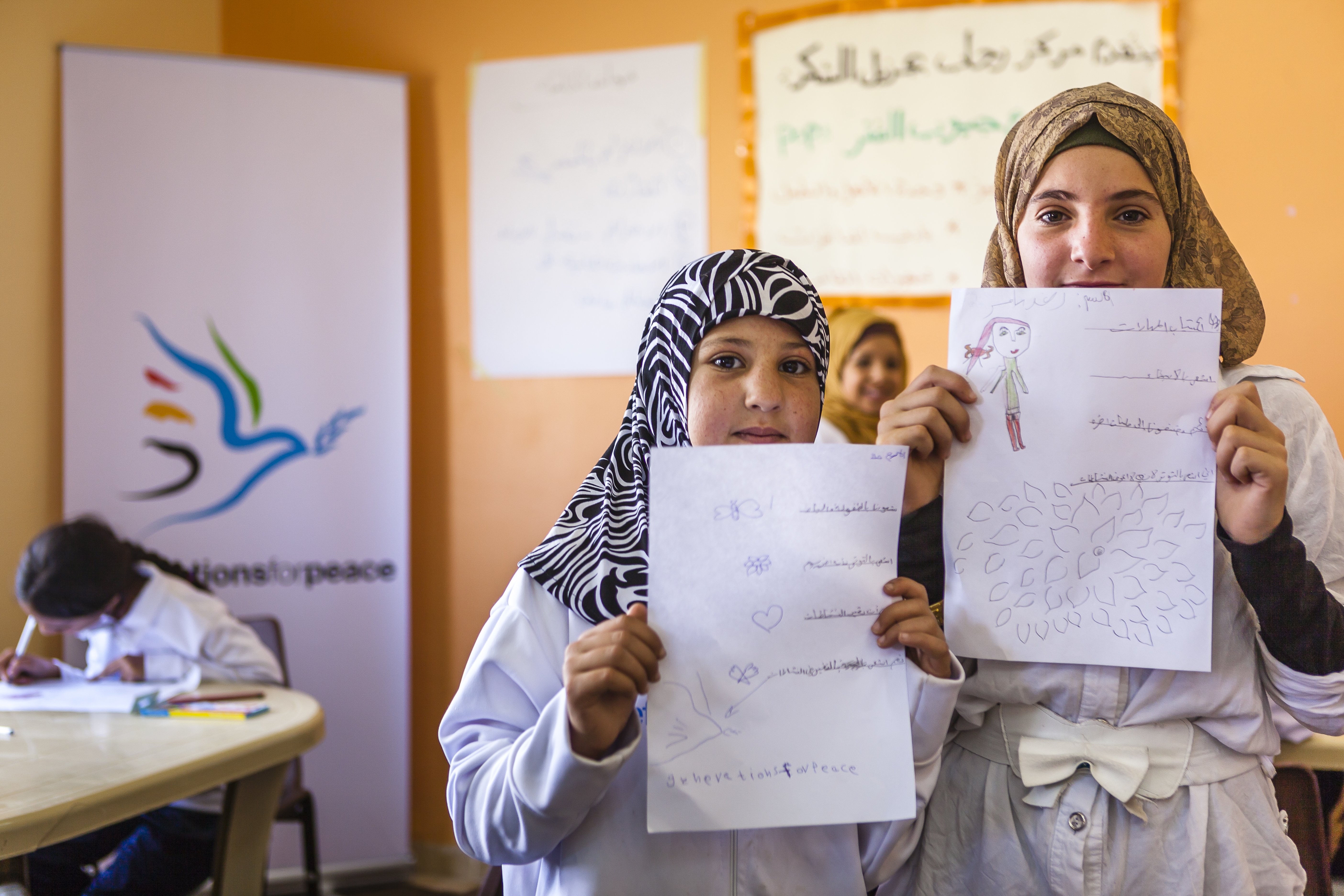 The GFP programme, supported by UNICEF, was designed in response to the increasing number of Syrians seeking refuge in Jordan, and the enormous pressures on both Jordanians and Syrians in host communities. Over a two-year period GFP aims to reach at least 5,000 Jordanian and Syrian refugee children and youth in 12 selected communities most in need. Volunteers on the ground work with youth in Amman, Zarqa, Irbid and Mafraq to encourage greater interaction and inclusion through carefully-designed sport and arts-based activities which promote positive dialogue and lasting friendships amongst youth. The activities strengthen resilience and social capital linkages that are essential to support improved coping mechanisms in these extremely challenging circumstances.

It is clear from talking to Amira that the programme also provided a lifeline to the outside world – she can finally be a teenager again. For a few hours every Saturday, she does not think of herself as a young divorced mother. Instead, she is just a regular teenager like every other girl in the room. She has friends, a space where she can flourish – it is an environment she treasures.

“Through the GFP activities we became close – we understand, and trust one another,” she explains.

‘Trust’ is a word that arises many times during our conversations – placing it in context she tells me about a particular activity that she enjoyed:

“We had to close our eyes and walk ahead; the girls that were behind us were leading the way, telling us which way to go, left or right. We couldn’t see, but we walked in the direction that they told us to, and this really made me trust them because they used to lead me in the right direction.” 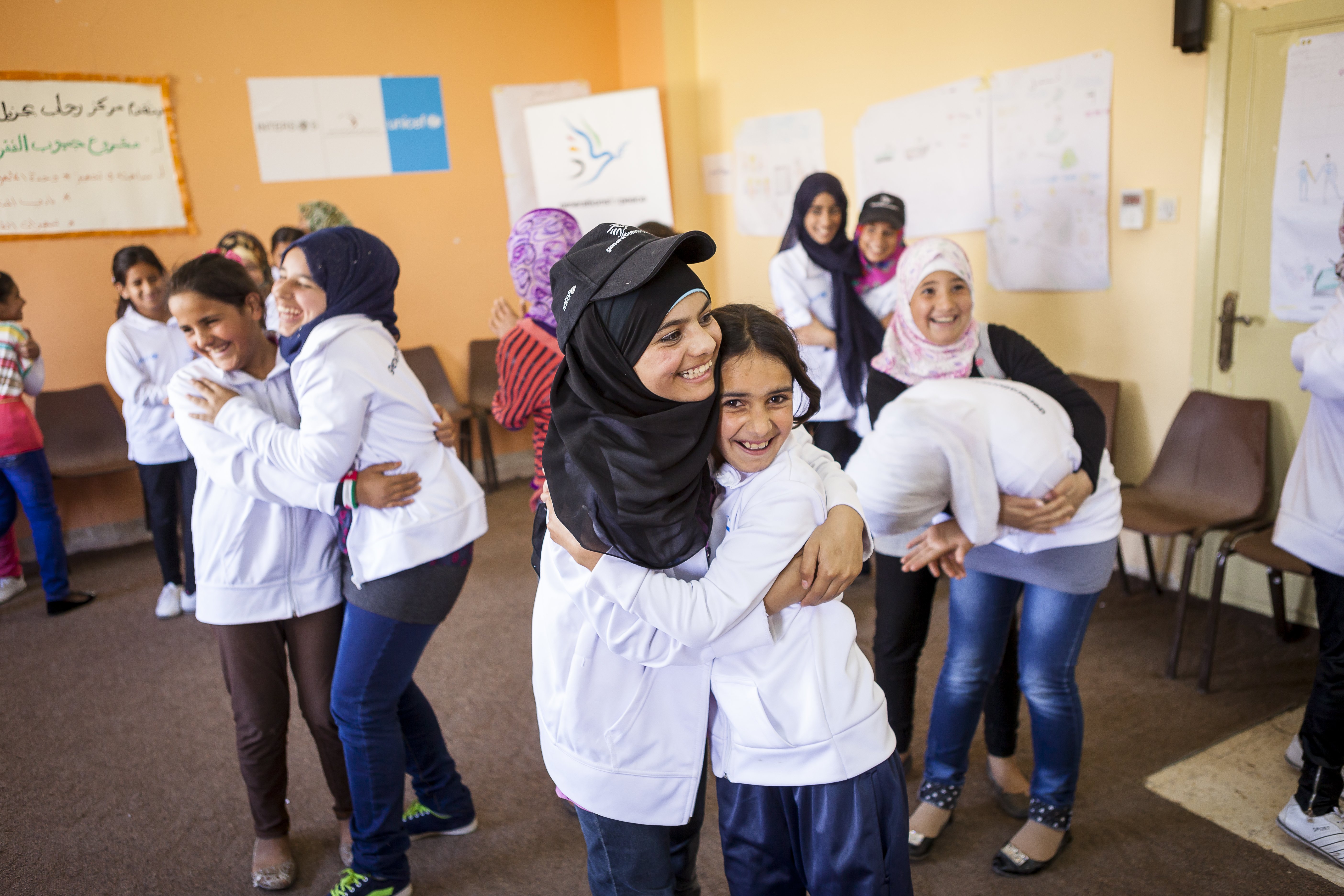 Put simply, Amira says: “The girls here are wonderful, and we really love each other. When I first came to the centre they came and interacted with me – this is why I liked them. I wish I had known them since a long time.”

Amira would regularly count down the hours until Saturday, the day when she would see her friends again: “I used to prepare myself on Friday!” she says with enthusiasm.

Before joining the programme, Amira stayed at home, where she mostly focused on raising her seven-month daughter. But today she is beginning to hope again: “I’m really excited about next year – I can’t wait for it to arrive because I want to go back to school, and to my future, for the sake of my daughter.”

Amira’s mother is fully supportive of her participation in the GFP programme and her pursuit of secondary education: “The most noticeable change that my mum witnessed is I used to be quiet but after the programme I started to speak more and more, and I was always telling my mum about my friends and the activities. She was really happy – she didn’t want this to end. She’s also happy that I’m going back to school,” she adds.

Amira is very pragmatic when it comes to her future and hopes: “My only dream is to see my daughter grow up and to see myself graduate, so that we can study together.”

And if it was not clear to begin with, she makes her point again: “Education is a weapon for each and every girl, if I study then my education will be my weapon, not only for myself but for the future of my daughter and my little sisters.”

*The name of the actual individual, and related photos, have been changed to protect their privacy.