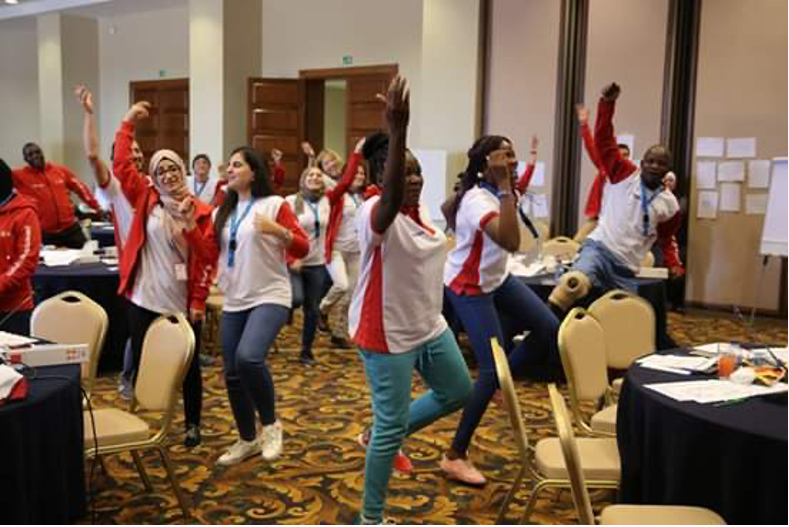 By Valentine Chauchereau, Communications Intern at Generations For Peace

“Why pay for a girl’s tuition fees if she is more likely to drop out or become pregnant? Society’s future is in the hands of boys, not girls.” Just before Sharon entered her first semester at university, she heard these words from her aunt. According to this aunt, Sharon’s dad was wasting his time and money investing in his daughter’s education. After hearing these words from someone within her own family, Sharon was determined to work harder to prove her capabilities. “Hearing these statements made me stronger. I decided to transform my anger and frustration into strength in order to create change in my community,” she shares. 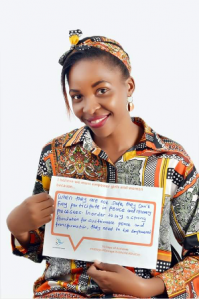 Originally from a family of ten children, Sharon grew up in Masindi District, located in Western Uganda. She and her siblings spent most of their childhood reading books at home. “My dad was very strict with us because he wanted to protect me and my siblings from the dangers and violence in our community. In Uganda, many girls get pregnant or married off at an early age. Women and girls are also highly exposed to sexual abuse.”

Although Uganda witnessed some progress in reducing gender-based violence over the past years, many women and girls are still subjected to sexual abuse and violence on a daily basis. In 2010, the government passed several laws to prevent violence against women and girls, including the Domestic Violence Act and the Prohibition of Female Genital Mutilation Act. However, eight years later, 50 percent of women between the ages of 15 and 49 years old still experience physical and/or sexual violence from their partner at least once in their lifetime. According to Sharon, changes in the legislation are not enough to efficiently reduce gender-based violence. “Although these laws mark significant progress for women’s rights, these are not exhaustive and are not being consistently implemented across the country,” she explains.

In Sharon’s opinion, education and dialogue that include both males and females are essential to reducing violence against women and girls. “Most solutions today only focus on women. However, the inclusion of both women and men is essential to combatting gender-based violence. Fostering understanding and communication between both genders is necessary to eliminate all of the unconscious biases contributing to violence against girls and women in society.”

Led by her belief in inclusion and dialogue, Sharon joined Generations For Peace (GFP) in 2018 as part of the organisation’s Sport and Arts For Peace Programme in Uganda, which focuses on reducing gender-based violence in schools. Throughout the programme, Sharon noticed how over time, male students began to change their attitudes towards their female classmates. Amongst them, John, a 15-year old student, remains in her memory to this day. “John used to bully girls. He believed that women had to stay home and did not belong to the workplace. Unconsciously, he was reproducing the gender norms and stereotypes present in our society.”

For example, John used to be convinced girls could not play football. According to him, men had stronger capabilities and were better at sport. To his surprise, he found his female classmates to be as perseverant and talented as their male counterparts during a football game. After that game, John went home to teach football to his sisters so that they could play together. “Sport is not about gender, but about what we can achieve as a team in order to reach our goal,” John explains.

Session after session, John became more aware of the many issues girls and women face in local society and he started to show empathy and offer support. “He took an active part in every session. He was constantly asking questions, and he also mobilised his classmates to attend the sessions. He ended up becoming one of the leaders of the group,” Sharon recalls. Today, John has completely changed his beliefs and attitudes towards girls and women. He now wants to become a changemaker in his school and community to raise awareness about gender-based violence and promote equality for all. “Being able to create such change in others and pass it on to other generations is something I will never forget,” Sharon reveals with pride.

Alongside her work with GFP, Sharon created her own initiative through which 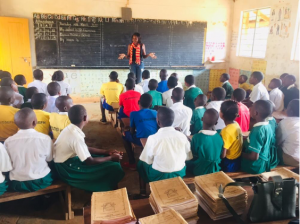 Sharon leading a session about gender-based violence in the primary school of St. Lawrence, Kampala

she addresses the daily challenges women and girls face and empowers them to lead transformative change in their communities. “One issue that remains in schools is that many girls are being bullied during their menstruation cycle, leading many to drop out,” Sharon explains. Through the education of both boys and girls about menstruation and reproductive health, Sharon aims to create change and build a society free of sexual abuse and violence.

In the future, Sharon hopes to educate young generations about gender-based violence on a wider scale using the skills she learnt from GFP. “I live by this principle: to whom much is given, much is expected. I will continue using the skills and experience I have acquired to educate, inspire, and empower future generations.”