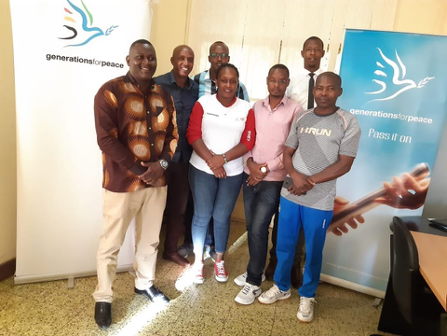 Christian was 20 years old when the Rwandan Genocide against the Tutsi happened. The Genocide, which began in April 1994, resulted in the death of 800,000 women, men and children. The memory of the atrocities that happened in his country is forever engraved in Christian’s mind. It reminds him why the development of Rwanda is reliant on building durable peace. In addition to the national mechanisms implemented by the Rwandan government to foster tolerance and reconciliation such as the establishment of the National Unity and Reconciliation Commission in 1999, he believes that engaging local communities through grassroots initiatives is essential to include people from all layers of society.

Christian believes that Sport can be used to bring people together to communicate and interact peacefully with one another, because he has seen first-hand the power of Sport in uniting people through his experience as the Executive Secretary of Rwanda Volleyball Federation (FRVB). “People understand each other easily through Sport. I believe Sport can transcend all barriers, whether related to different socio-economic backgrounds, ethnicities, or political opinions. Sport is a common language.” It was this belief in Sport that led Christian to join Generations For Peace (GFP) as a volunteer in 2008.

During his time as a volunteer, Christian discovered his passion for peacebuilding and volunteering. “I saw major behaviour changes and realised I could have a positive impact on my community,” he enthusiastically shares.

While at first youth had difficulties communicating and sharing their experiences with one another, they progressively opened up and, to Christian’s surprise, are now taking full ownership of the activities. “It was great to see how youth took more and more responsibilities during the sessions. Even more, they started to use their own passion to promote peace and reconciliation,” Christian recalls with pride. Amongst them, the recollection of Jean, a young participant, remains in his memory to this day. Being an only child, Jean lost his parents during the Rwandan Genocide against the Tutsi and grew up in an orphanage. After attending a couple of GFP sessions, Jean decided to share the doubts and fears he had for his future with Christian. “I told him that life had to go on, and that he could play a major role in shaping his future and the one of his community. Today, I am proud to see how Jean uses Arts to promote peace and tolerance in our community.” Christian explains.

“I will always remember the day I met Christian. He made me realise I could make this world a better place using what I like the most. With GFP, my way of creating Arts profoundly changed. I now focus on building long lasting peace in Rwanda,” Jean remembers. 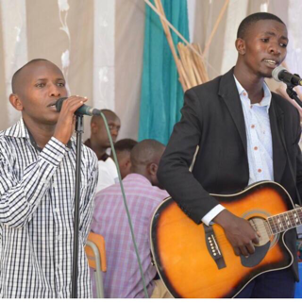 From right to left: Jean and another GFP participant sharing their songs during a GFP Arts For Peace session.

Like Christian, Jean uses what he does best to promote peace and tolerance in his community. From music, theatre, and contemporary dance, to drawing and painting, Jean uses Arts as means of communication and dialogue. “Arts allows for the expression of thoughts and beliefs. It is a common language. Using Arts, one can tell stories and express emotions that could not be shared otherwise,” Jean explains.

One of his most cherished memories is when he told the story of a participant whose parents were banned from Rwanda. Originally Tutsis, they were forced to flee to Uganda at the time of the Rwandan Genocide. To tell their story, Jean created a theatre play in which he used songs, dance choreographies and poems. Together with the participants, Jean performed at the University of Lay Adventist of Kigali. After the show, they organised a panel discussion during which students could reflect on how to foster tolerance in Rwanda. “I found it amazing how students took part in the discussion. They even provided me with some ideas for future projects,” he recalls.

In addition to his strong commitment to volunteering, Jean is now taking initiatives on his own. With his friends, he started designing artwork and has been presenting those to secondary schools and universities across Rwanda to generate discussions and educate children about peace and reconciliation. 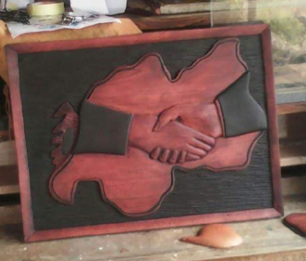 Artwork designed by Jean and his friends, symbolising peace and reconciliation in Rwanda.

To this day, Christian and Jean continue to pass it on and empower young generations in their communities. Using Sport and Arts as common languages, they share their passion and use the skills they learnt to mediate conflict and foster reconciliation.

“Peace takes time and is a continuous process. This has now become our every-day job,” Christian proudly shares. Jean also agrees, adding that he dreams of building an art gallery centre where he and his friends can teach Arts to children to promote sustainable peace.