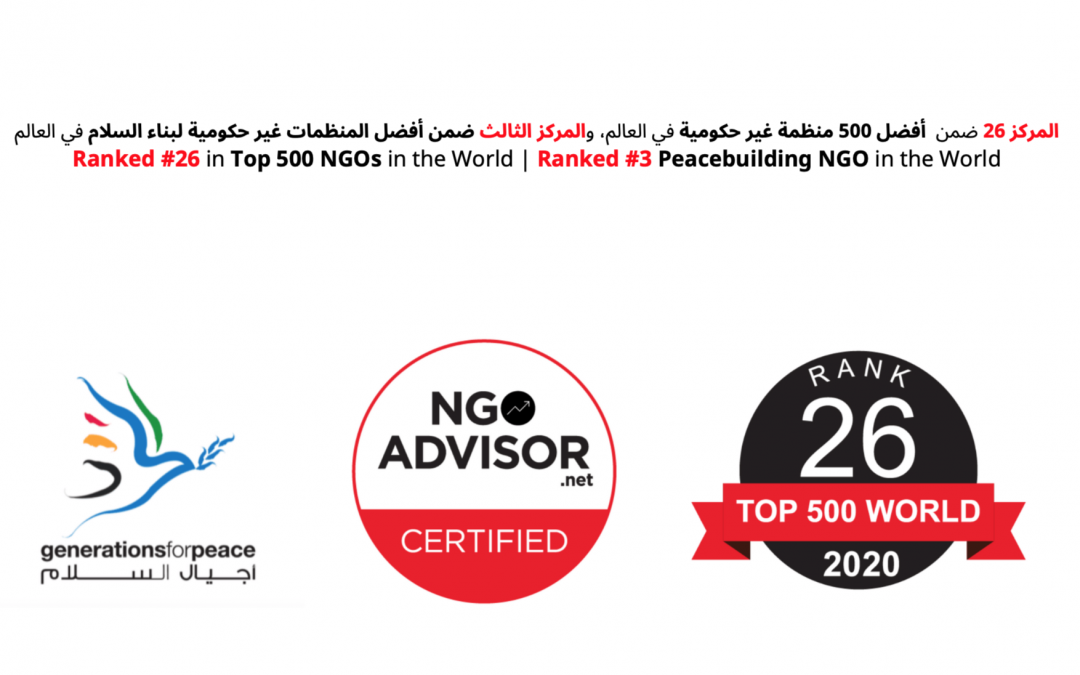 4 February 2020 – Amman/Jordan: Generations For Peace has been ranked as the number 26 non-governmental organisation on NGO Advisor’s list of “Top 500 NGOs in the World.” The organisation’s three-point rise from its position of number 29 in 2019 marks the fifth consecutive year that Generations For Peace has improved its position in the rankings, reflecting another year of significant achievement for the global peacebuilding non-profit.

Generations For Peace also maintained its position as number three peacebuilding NGO in the world and as the highest-ranked NGO in the Arab World. The rankings are measured annually based on criteria laid out by NGO Advisor, a Geneva-based independent media organisation committed to highlighting innovation, impact, and governance in the non-profit sector.

Reflecting on another successful year for the organisation, HRH Prince Feisal Al Hussein of Jordan, Founder and Chairman of Generations For Peace, stated: “The organisation’s rise in the ranking for the fifth year in a row reflects the hard work and passion of our delegates, pioneers, and HQ team. Thanks to their dedication and creativity at the grassroots, Generations For Peace has once again reached milestones and demonstrated its commitment to innovation, quality, impact, and sustainable conflict transformation in local and global communities. We share this recognition with all our valued donors and partners, whose support is essential to the efforts of Generations For Peace. It is an honour to be recognised once again, and we look forward to continue to build peace around the world and to pass it on!”

Jean-Christophe Nothias, Editor of the ‘Top 500 NGOs’ list, also lauded the success of Generations For Peace, saying: “There are few iconic NGOs that truly capture the success of the nonprofit sphere. Despite its young age, Generations For Peace just may be one of them. At first glance, its grassroots peace-building mission seems nearly impossible. Asking youths rather than governments to bring about peace may sound a bit naïve. But when you face GFP’s army of young, articulate, peace-pushing volunteers, then you understand that something big is going on here. There seems to be no limit to the organization’s ambition and discipline.”

Generations For Peace’s high ranking in 2020 is determined by a number of factors including its innovation in developing peacebuilding tools and adaptive programming; its strong focus on impact measurement, participatory evaluation, reflection, and learning; its sustainable cost model; and its strong partnerships, including those with United Nations agencies, governmental donors, and commercial partners.

Generations For Peace is dedicated to sustainable conflict transformation through an innovative approach to peacebuilding that empowers young generations at a grassroots level. The only peace-through-sport organisation officially recognised by the International Olympic Committee, Generations For Peace uses sport, arts, advocacy, dialogue, and empowerment to bring about positive change and sustainable peace amongst communities worldwide. As of today, the organisation has trained, mentored, and supported more than 15,618 volunteers from 51 countries, impacting the lives of 740,207 children, youth, and adults. The organisation’s programmes cover a range of conflict issues, from ethnic, tribal, and religious disputes to gender inequality, violence against women, and minority and disability discrimination.