The award honours the contributions of Generations For Peace to MBC Hope’s youth-focused initiatives in 2017. 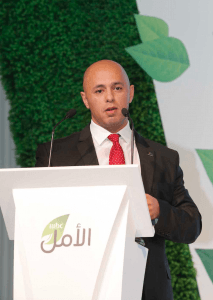 Held Sunday night at the Palazzo Versace in Dubai’s Culture City, the fourth annual “MBC Hope” Awards ceremony hosted a range of high-profile organisations and individuals. Guests included MBC’s strategic partners, stakeholders, and directors, as well as a handful of celebrity presenters and MBC Group CEO Sam Barnett. In addition to the distribution of awards, the ceremony highlighted MBC Hope’s milestones from 2017 and recognised “unsung heroes” in the Middle Eastern region.

Over the course of nearly a year, Generations For Peace has provided MBC Hope with valuable insight into various means of actively engaging youth from the grassroots, inviting representatives of the broadcast group’s growing CSR arm to visit and learn more about such programmes as Nashatati, Generations For Peace’s acclaimed Jordan After School Programme.

In November, MBC Group’s Head of Corporate Social Responsibility, Mariam Farag, joined Generations For Peace CEO Mark Clark and President Dr. Mohanned Al-Arabiat as they hosted a key forum at the Palais de Nations during Geneva Peace Week. The forum served to highlight the journey of Generations For Peace’s rapid progression from a pilot project of the Jordanian Olympic Committee in 2007 to a top-ranked, global peace-building NGO a mere 10 years later, while giving MBC Hope the platform to discuss its programme and sustainable development goals.

MBC Hope’s focus on the education, work readiness, and entrepreneurship of Arab youth runs parallel to Generations For Peace’s mission of and expertise in youth empowerment, paving the way for an impactful and prosperous partnership. The award bestowed upon Generations For Peace on Sunday night recognises not only the past successes, but also the future opportunities made possible by continued collaboration between the two organisations.

Generations For Peace President Dr. Mohanned Al-Arabiat attended the ceremony and accepted the award on behalf of the organisation. “In its 10 years of operation, Generations For Peace has become known as a leading peace-building NGO not only in Jordan, but also on a global scale,” Dr. Al-Arabiat shared with attendees. “Our work over 10 years in 50 countries across Africa, Asia, Europe, and the Middle East has led to the implementation and expansion of multiple youth leadership programmes, each of which provides a unique and invaluable approach to promoting youth-led, youth-focused peace building. It is largely due to the commitment of indispensable partners like MBC Hope that this is possible.”