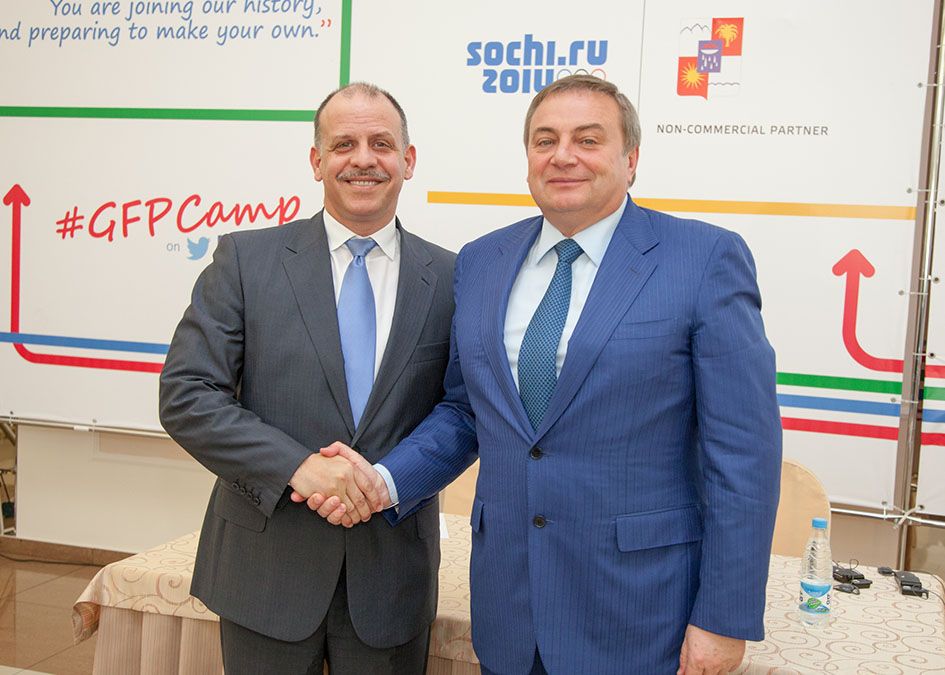 15 March, 2014 – Sochi, Russia: HRH Prince Feisal Al Hussein, Founder and Chairman of Generations For Peace, Mayor Anatoly Pakhomov, of Sochi City Administration, and Dmitry Chernyshenko, CEO of Sochi 2014 Organizing Committee, today celebrated the success of the Generations For Peace Sochi Camp 2014, organized over eight days during the Paralympic Winter Games, and five years of collaboration together under the Generations For Peace Sochi ‘Legacy Today’ partnership.
Speaking at the closing press conference of the Generations For Peace Sochi Camp 2014, HRH Prince Feisal Al Hussein said: “Our ‘Legacy Today’ partnership with Sochi 2014 and Sochi City Administration over the last five years has itself been a ground-breaking innovation. As well as three Sochi Camps and a Sochi Regional Workshop, together we have also supported the actual programmes implemented by Sochi Camp Delegates in their own communities, here in Sochi, in different regions of the Russian Federation, and in twelve other countries. That is an unprecedented example of an Olympic Games Organising Committee and Host City implementing concrete actions to deliver lasting legacy.”

He went on to applaud Pakhomov and Chernyshenko and their teams, and paid tribute to Deputy Prime Minister Kozak for the support of the Federal Government and the Intergovernmental Commission: “Our Sochi Camp success stands on the shoulders of these giants. They have given the world the greatest Olympic and Paralympic Winter Games in history, have transformed a city and indeed a nation, and have provided a lasting legacy of volunteerism and grass-roots peace building.“

Mayor Pakhomov said: “Once again, Sochi has risen to the challenge and provided an outstanding experience for our visitors from around the world. And this partnership has helped deliver our ‘Legacy Today’ promise in our city, and in so many other communities. We hope this may be a shining example for other host cities to follow.”

Chernyshenko said: “The backdrop of the Paralympic Winter Games has given the Delegates at this Camp the experience of a lifetime. They heard legendary Russian Paralympian, Sergei Shilov, share his personal story, embodying the Paralympic values of courage, determination, equality and inspiration, and then witnessed him light the flame at the Opening Ceremony. This shows the power of sport, and the values of the Olympic and Paralympic movements, to inspire youth leadership and volunteerism. We are proud to have partnered with Generations For Peace, the only peace-through-sport organisation officially recognised by the International Olympic Committee, to create a lasting legacy of volunteers trained to bring people together, to break stereotypes, build understanding and trust, and reduce violence”.
After 8 days of intensive peace-building training for youth leaders from 8 countries, today marks the conclusion of the Generations For Peace Sochi Camp 2014. The 71 participating youth leaders came from Bosnia and Herzegovina, the Former Yugoslav Republic of Macedonia, Georgia, Jordan, Kyrgyzstan, the Russian Federation, Serbia, and Turkmenistan. Upon their return home Generations For Peace will continue to mentor and support them, as volunteers, to use sport, arts, advocacy and dialogue to address local issues of conflict and violence in their community.