I Could Have Become a Militant or Terrorist 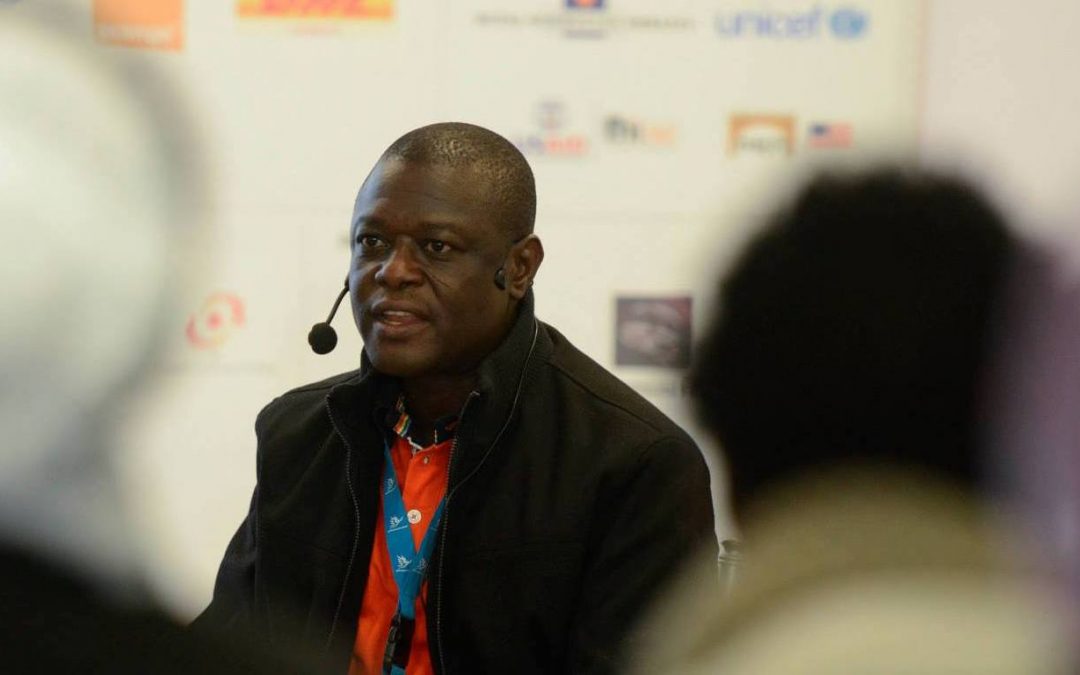 By Abdiel Kude, Generations For Peace volunteer and facilitator

There was a time when the only option I considered was identifying a militant or terrorist group I could join in Nigeria. Seriously, I really did contemplate stepping into that world – to do stuff. The idea would not leave my mind, and try as I might, it was stuck there for years. I felt the sting of injustice that sent my father to prison and kept him there for four years, and even sentenced him to death. After many years I still could not get the picture of my father behind prison bars out of my mind. I wanted pay back – to tell the world that my father had been unjustly treated.

Since the last decade of the 19th century, when the British colonial government crushed the resistance in the then Southern Zaria region, there followed a long period of sustained conflict between the Atyap and the Hausas in the Zangon Kataf Local Government Area of Kaduna State. This conflict, which finally erupted into violence between February and May 1992, escalated and claimed the lives of thousands of people in multiple locations across five states. Thousands of individuals and families were displaced across Kaduna and other states, especially in the north. It was the first conflict of its kind to spread over such a wide area in Nigeria. The government’s reaction was to arrest a large number of Atyap elite, elders and leaders. My father was one of them. 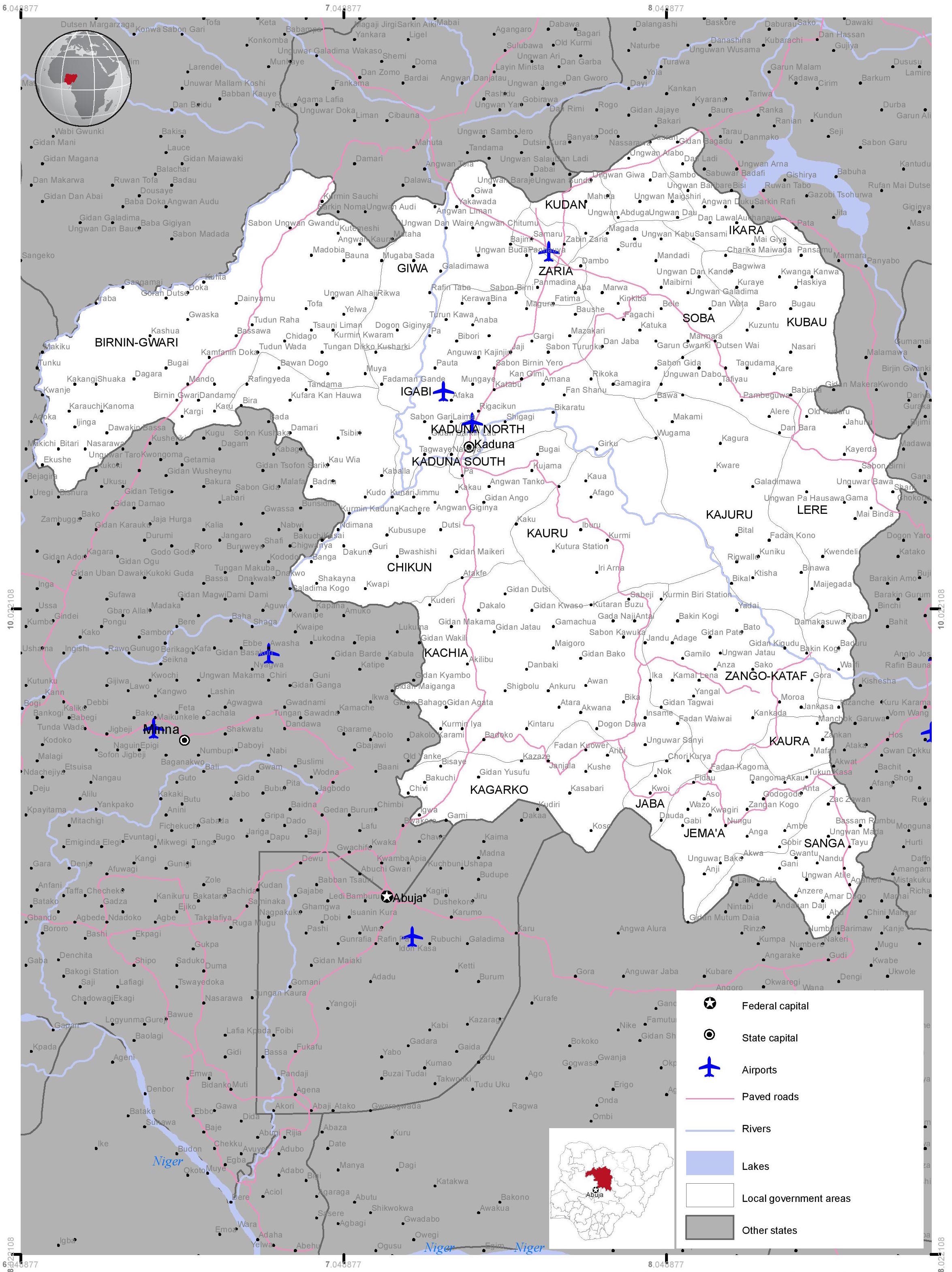 Many were released after a few months, but eight were tried by a sham tribunal which sentenced them to death by hanging. My father was among the eight. Fortunately, a national reaction to the tribunal’s judgement delayed the execution of the death sentence but all those sentenced were held in prison. During this time, Nigeria came together to protest the death sentence and appeal to the Supreme Court. Over the four years (1992–1996) that the case was heard, I visited my father twice while he was in prison – once in Kaduna and again at Port Harcourt prison. These visits, and the picture of my father behind prison bars, made me bitter. I was bitter with the community, government and society.

All eight sentenced persons were released in September 1996 after a landmark ruling by the Supreme Court, but my bitterness remained with me. I pretended everything was fine while going about my work as a civil society activist. But inside, I contemplated dreadful things.

Then I met Safiya Ibn Garba, current Lead Facilitator and Programmes Manager at Generations For Peace (GFP) Headquarters, and a peace-building volunteer herself. Safiya and I represented both our organisations in a state-wide coalition of NGOs – the Kaduna State Gender Working Group popularly known by its acronym, GWG. At some point I was appointed to a committee she was heading and we worked on a project for about three months. Safiya invited me to attend one of the GFP trainings a couple of times between 2010 and 2011 but I was not interested. A last invitation was offered late in 2011 and I decided to attend the training in Kaduna scheduled in January 2012, just to humour her. That was a turning point for me.

During the GFP training I realised something: conflict will always come but my response to it does not have to be vengeful or spiteful. The training helped me put a lot of personal conflict and life issues in perspective, and it also helped me to tackle my stereotypical thinking. I learned that every conflict situation is unique and should be analysed adequately in order to be addressed. Working with GFP has helped me develop a more grounded and positive approach to life and to maintain good relationships. GFP has a well-tested behavioural change approach that targets the community level – right where change happens. 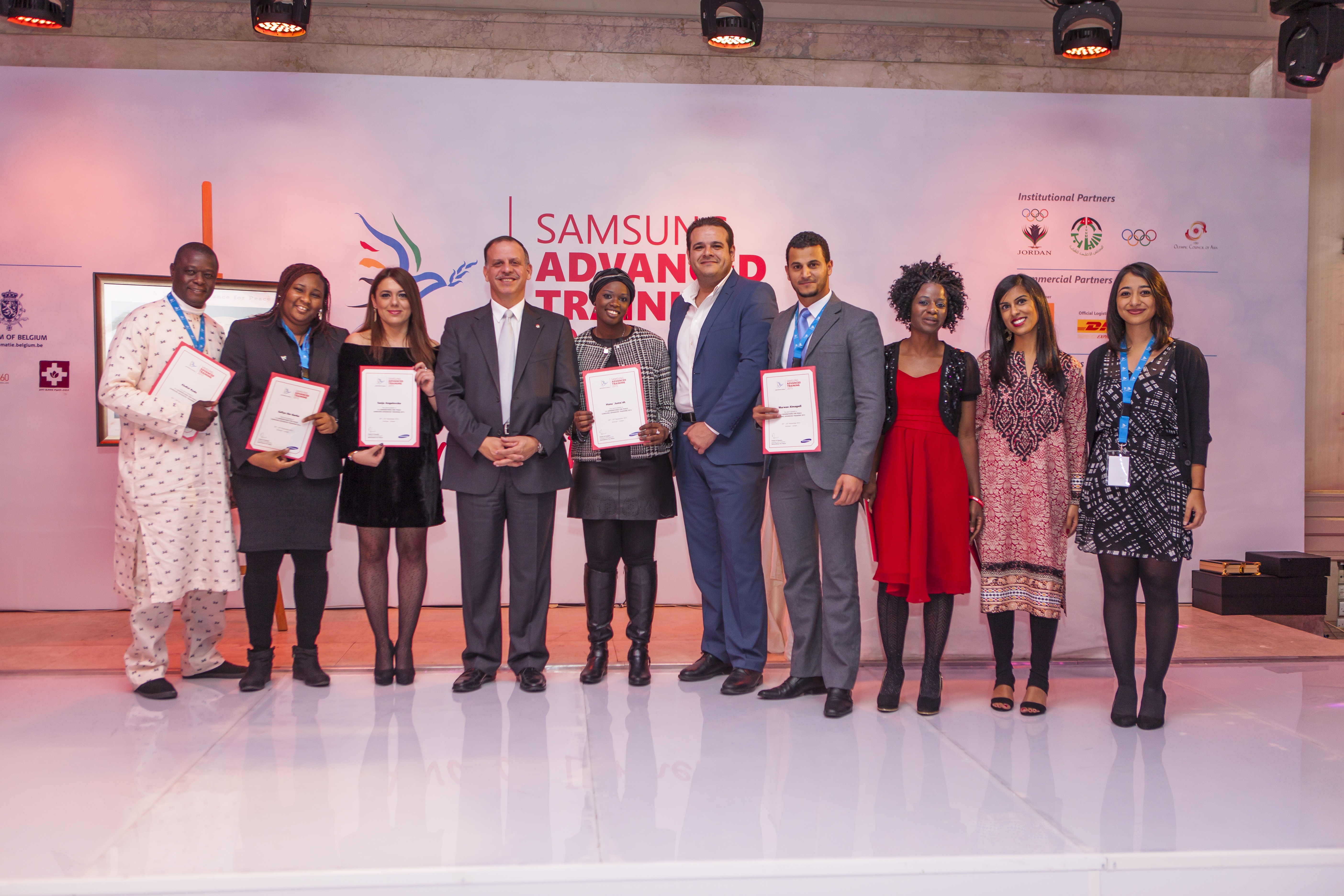 This knowledge built in me an internal gyroscope – that little known instrument in the heart of a ship or an aeroplane that keeps it from tipping over and succumbing to turbulence. The way I see it now, peace builders are human gyroscopes that help to sustain balance in society. They are able to sense the slightest occurrences that can endanger peace and they act to secure peace. Rather than continuing with hate, I became a peace-building volunteer, a human gyroscope – seeking to keep the balance, peace in this case, and avert crises, probably violence.

After the January 2012 training, I cascaded my learning through a training at the Kaduna State College of Education with 34 new volunteers.

One programme where a team of GFP volunteers, myself included, were able to work effectively as gyroscopes was at the Kaduna State College of Education. The college trains teachers but was also a volatile community itself – they experienced several violent riots which have punctuated their history since 1987. The last riot took place in April 2013 while I was attending the Advanced Training at the GFP Headquarters in Jordan. A clash between two students from the Department of Theatre Arts, which involved teaching staff and college security, led to one of the students being assaulted. A rumour went around that the student had died, sparking a violent reaction from the other students who had been following the matter.

After returning to Nigeria I contacted Gloria Kude, a GFP volunteer working at the college. She arranged for Babatunde Ajiga, a GFP volunteer, and I to visit the provost. The GFP approach was explained to the Provost, Mrs. Hope Gajere, during the call and she immediately took a keen interest. She responded that our visit was timely as they had just experienced a student riot, and she was willing to try it out in the college. With support from the college management, GFP volunteers swung into action. 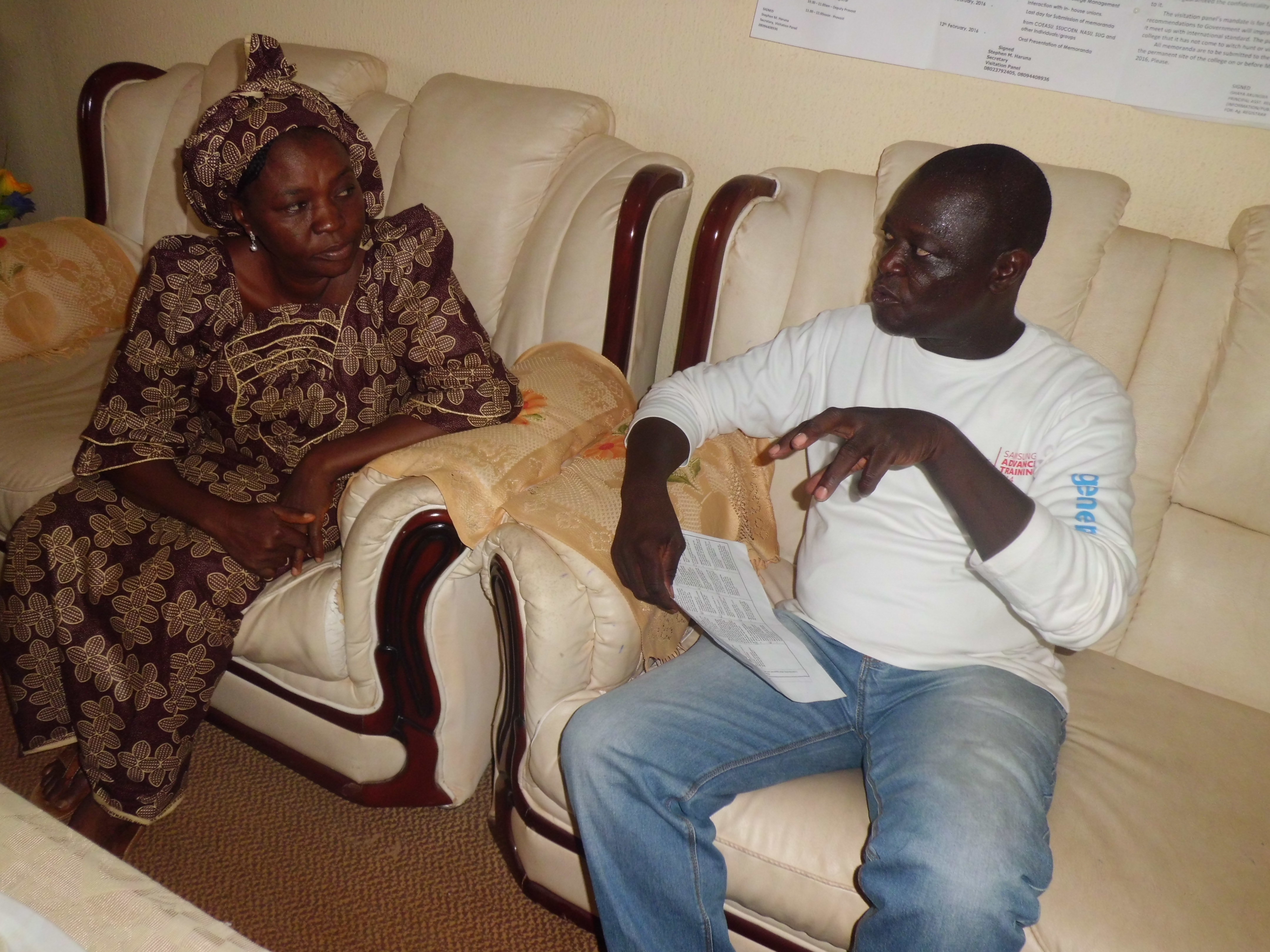 Having a GFP volunteer in the college, who turned out to be one of their well-recognised staff, helped make the visit and access to the provost and other top officials quite easy. However, an advocacy visit could not be arranged immediately as the Kaduna State Government had directed that the college be closed down due to the extent of infrastructure damage. The college re-opened late 2014 and GFP volunteers arranged to carry out an advocacy event in February 2015. The event received broad support by the provost and was backed by the academic board.

I was motivated by my renewed interest in conflict, this time seeking to transform it. In collaboration with a few staff and students from the college, our GFP team carried out a conflict analysis. The conflict analysis is an important stage in GFP interventions and programmes. It involves a systematic and technical assessment of the conflict that enables all volunteers to gain an adequate understanding of the situation and avoid personal or one-sided perceptions. We planned to work with 40 students selected from different ethnic and religious backgrounds, and from different levels of study in the college, implementing three-hour sessions of an Advocacy For Peace Programme over six months. During the programme the participants would be guided in order to learn how to accept each other, cooperate better, and build stronger and meaningful positive relationships. This would then lead to reduced interpersonal and group clashes among students. We hoped this would be the result of the GFP intervention.

By the time the participatory evaluation took place, the college provost and some faculty and senior management staff were in attendance to share the changes they had observed among the participating students as well as the impact it had in the college. A once rowdy and cheeky student community, (especially the Department of Theatre Arts) became stable and sensitive to the need to maintain orderly behaviour for the good of the college community. The students stated that they realised they could individually represent a peaceful community or a violent one, and that they could either choose to be agents of peace or violence. Interestingly, most of the new advocates were from the same department where conflict and crises prevailed previously. They only hoped the programme would continue. GFP revealed to the college community that they too could build their own human gyroscopes into their community, sustaining peace and making their society stable and better using the GFP conflict transformation approach.

I am glad I did not take the opportunity to become a vengeful, spiteful militant or terrorist with a mission to inflict mental and physical hurt on others. GFP gave me the opportunity to become a peace builder, a human gyroscope. I learned to become sensitive to situations or actions that are likely to generate conflict, and that there are equal actions that can reduce conflict. I have also seen, in the course of implementing peace-building programmes, communities rediscover a long lost peace and become sensitised to the potential of community members as agents of peace. I have a definite calling now. I look to the future with a great hope, knowing that I am not the only one who desires peaceful, stable and progressive communities. And because of this, and the thousands of others volunteering to preserve peace in the countries where GFP works, I believe a better world is attainable. Pass it on!