9 December, Amman, Jordan – Today, at a special event to mark the 2nd anniversary of UN Security Council Resolution 2250 on Youth, Peace and Security, H.E. Mr Hadithah Khreisha, Minister for Youth, reaffirmed Jordan’s commitment to effective implementation of the resolution and announced the establishment of the “Jordan 2250 Coalition” under the patronage of HRH Crown Prince Al Hussein. The coalition is the world’s first coalition of government, non-governmental organisations and UN agencies to collaborate together on implementation of 2250 at local and national level. Founding members of the coalition include: Ministry of Youth, Crown Prince Office, Crown Prince Foundation, Generations For Peace, I Dare, Jordan National Council for Women, Mercy Corps, Search For Common Ground, West Asia North Africa Institute, the British Council, UNDP, UNESCO, UNFPA, UNICEF, and UN Women. 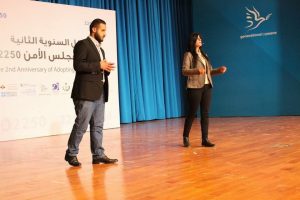 Youth from communities across all twelve governorates of the Kingdom attended the event, at Generations For Peace headquarters in Al Hussein Youth & Sport City, and learned more about programme activities being implemented by the coalition organisations.

During his commencement speech at the event, Minister Khreisha praised the efforts exerted by HRH Crown Prince of Jordan in delivering the message of youth, peace and security to international organizations. Khreisha said “The Jordanian Hashemite leadership has made the country an oasis of security and stability. Our country has become a distinctive example of enhancing the leadership role of youth and placing them in decision-making positions. This in turn allows youth to enhance their civic participation and community engagement. The Ministry of Youth continues to provide support for our Kingdom’s youth through a series of programmes that reflect their aspirations and needs.”

UNSCR 2250 recognises that “young people play an important and positive role in the maintenance and promotion of international peace and security”. It identifies five key pillars for action: participation, protection, prevention, partnerships, disengagement and reintegration, and urges Member States to give youth a greater voice in decision-making at the local, national, regional and international levels. It also encourages them to set up mechanisms to enable young people to participate meaningfully in peace processes. The landmark resolution followed the hosting by HRH Crown Prince Al Hussein of the Amman Global Forum and “Amman Declaration” on Youth Peace and Security in August 2015, HRH the Crown Prince being the youngest-ever President of a UN Security Council debate, and the joint diplomatic efforts of Jordan and Norway resulting in the unanimous adoption of the resolution on 9th December 2015. 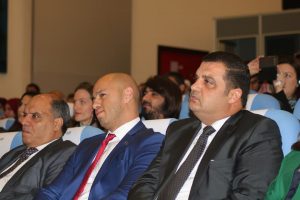 Dr Mohanned Al-Arabiat, President of Generations For Peace, commented, “We are very proud to be part of this ground-breaking new coalition under the patronage of HRH Crown Prince Al Hussein, and to be hosting today’s event at Generations For Peace headquarters. Today is a celebration, a recognition of all the good work that is already being done, and a commitment to do more, in communities across the Kingdom, to engage youth and support their participation in community actions to foster youth leadership, strengthen resilience and social cohesion, and prevent violence. The coalition is an example to the world of effective collaboration between stakeholders, committed to turning the words of the resolution into concrete action for meaningful impact in communities.”