My take, your take: Empowering women to become their own champions 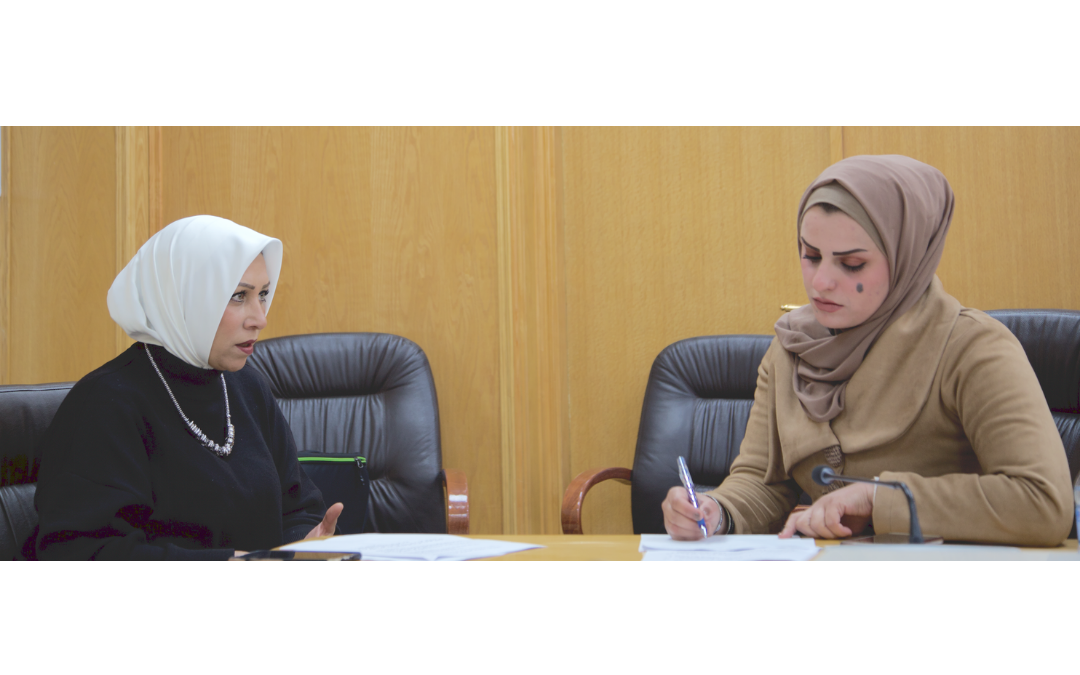 Generations For Peace is joining UN Women’s intergenerational series for Generation Equality, where young people take the lead to shape the conversation, conducting interviews with prominent women who were able to create real change and leave a lasting positive impact in the advancement of women’s empowerment and gender equality. Rawan Abu Shatira, 29, is a volunteer with Generations For Peace and UN Women, under the ‘Youth for Women, Peace and Security’ programme generously funded by the European Union, talks with Suad AlKhateeb, Head of the Women Empowerment and Civil Society Institutions Department at the Jordanian House of Representatives and member of the national Coalition of Jordanian National Action Plan (JONAP) for the implementation of the UN Security Council Resolution 1325 on Women, Peace and Security.

Rawan Abu Shatira interviews Suad AlKhateeb on the challenges of being a woman in a position of leadership in Jordan. Photo: Generations For Peace/Noor AbuZaid

Rawan Abu Shatira, 29, is led by her passion to advocate for women’s empowerment and gender equality in her local community. In her effort to raise awareness and promote dialogue on women’s rights and their participation within their communities, she chose to join the “Youth for Women, Peace and Security” Programme, by Generations for Peace and UN Women, which is mobilizing over 33,000 youth across Jordan with the support of the European Union to actively engage in community initiatives and raise awareness on the role women play in preventing conflict, and in promoting peace and security.

In her conversation with Suad AlKhateeb, Abu Shatira agrees that women in Jordan have overcome many obstacles, but challenges persist. AlKhateeb shares “We’ve witnessed the positive impact of laws and policies; people actually pay attention to them. Real and sustainable change will only be achieved through the implementation of legal support, both at the local and international level.”

Reflecting on the progress made for women’s rights in Jordan, Abu Shatira stressed the need to support women and girls at the beginning of their careers. “I know firsthand the challenges young women face when trying to get involved or starting their careers. I am inspired by women like Suad AlKhateeb who have shown strength, despite certain barriers to achieve success in their lives, proving that anything is possible if you persevere and work hard.”

When and why did you join this field of work?

Suad AlKhateeb: I started my career in the private sector at a time when the role of women was limited to secretarial tasks, such as printing documents and data entry. I knew I had the capacities to do more meaningful work, so I decided to search for another career opportunity that would allow me to utilise my skills, no matter my gender. I was interested in the public sector and, when I was in my thirties, I was fortunate enough to find a job opportunity within the Jordanian Parliament. I used every opportunity to prove that I was able to take on more responsibilities, and slowly, I began to climb the career ladder. As the current Head of the Women Empowerment and Civil Society Institutions Department, I take pride in knowing that my eagerness to prove my capacities is now helping others to do the same.

What are the challenges you and other women face in this field of work?

Suad AlKhateeb: In the beginning of my career, the most difficult challenge I faced was the way in which my colleagues viewed women. However, there was light in the support that I received from the Speaker of the House of Representatives. He empowered me and supported my initiatives on women’s rights. I know that other women may not have the same mentor I found. Despite his support, I felt that no matter what I did, or what other female colleagues did, our efforts and accomplishments were undervalued by others due to the fact that we were women. I constantly hoped for a day where people’s strengths would be valued despite of their gender.

Although I believed in my leadership skills, there were times that I had to work in field outside my specialisation. I kept in mind that I had to prove myself by consistently ensuring the work was completed and of high quality. I also knew I had to stand up for myself when I felt that someone was diminishing my capabilities because I was a woman. Luckily, my strong character and personality allowed me to do so, and my colleagues began to notice as well. This, along with my wit, skills, and intelligence, allowed me to overcome the challenges I faced in the beginning. I still rely on these skills as I continue to progress in my career.

In your opinion, what hasn’t changed yet for women in Jordan? Where do we go from here?

Suad AlKhateeb: There is still a lot of progress that needs to be made for women. This starts by empowering and allowing women to put in practice their skills, rights, and responsibilities, and by providing them with opportunities for excellence, creativity, and leadership.

I think that it is necessary to continue focusing on enacting legislation and laws, such as the JONAP on UNSCR 1325, that provides a strong protection framework for women, advocating for gender equality in all fields. This must be done alongside men, and efforts must continue to increase societal awareness on issues related to gender equality and women empowerment. Women can be leaders at the local, national, and international levels, including on issues such as crisis management, communicating a vision, and change management.

I absolutely believe that empowering and supporting women in all fields and levels directly contributes to accelerating the growth and prosperity of not just their families, but also the society, our nation, and the entire world. When women lead, everyone succeeds.

This is a special editorial series for UN Women’s Generation Equality campaign. The intergenerational series connects youth activists with veteran women’s rights activists and explored intergenerational perspectives on today’s issues. Generations For Peace and UN Women, with the support of the European Union, are mobilizing 33,000 youth across Jordan to raise awareness on the important role women can play in preventing conflict, promoting peace and security, under the ‘Youth for Women, Peace and Security’ programme.