Overcoming the Past with Bravery and Optimism 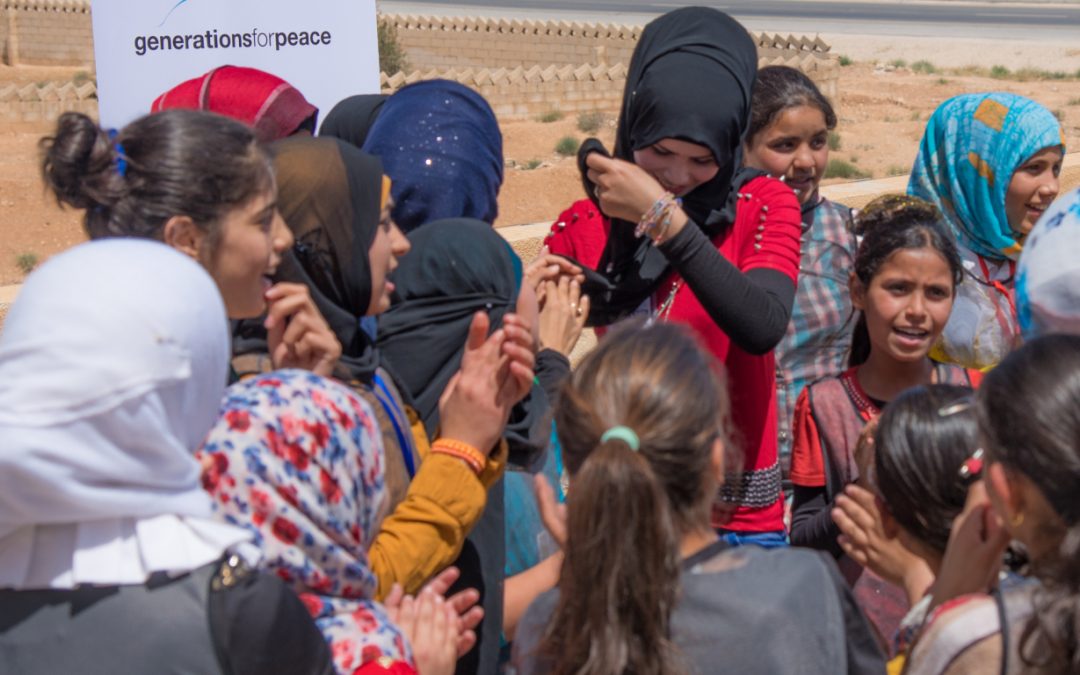 “And then one day, our house was bombed and everything changed instantly. We knew we had to run…”

Layan takes a sip of her water, blinking back her tears. “Don’t worry,” she reassures me. “I won’t actually start crying. I’m strong now.”

Layan is one of 1600 Syrian and Jordanian girls and boys participating in the Generations For Peace-UNICEF Social Cohesion Programme in Mafraq, Jordan. Every week, they meet at their local youth community centres and spend the day participating in sport and art-based games, which are led by Generations For Peace (GFP) volunteers. These activities help to strengthen social cohesion, break down stereotypes, and reduce tensions and violent behaviours. 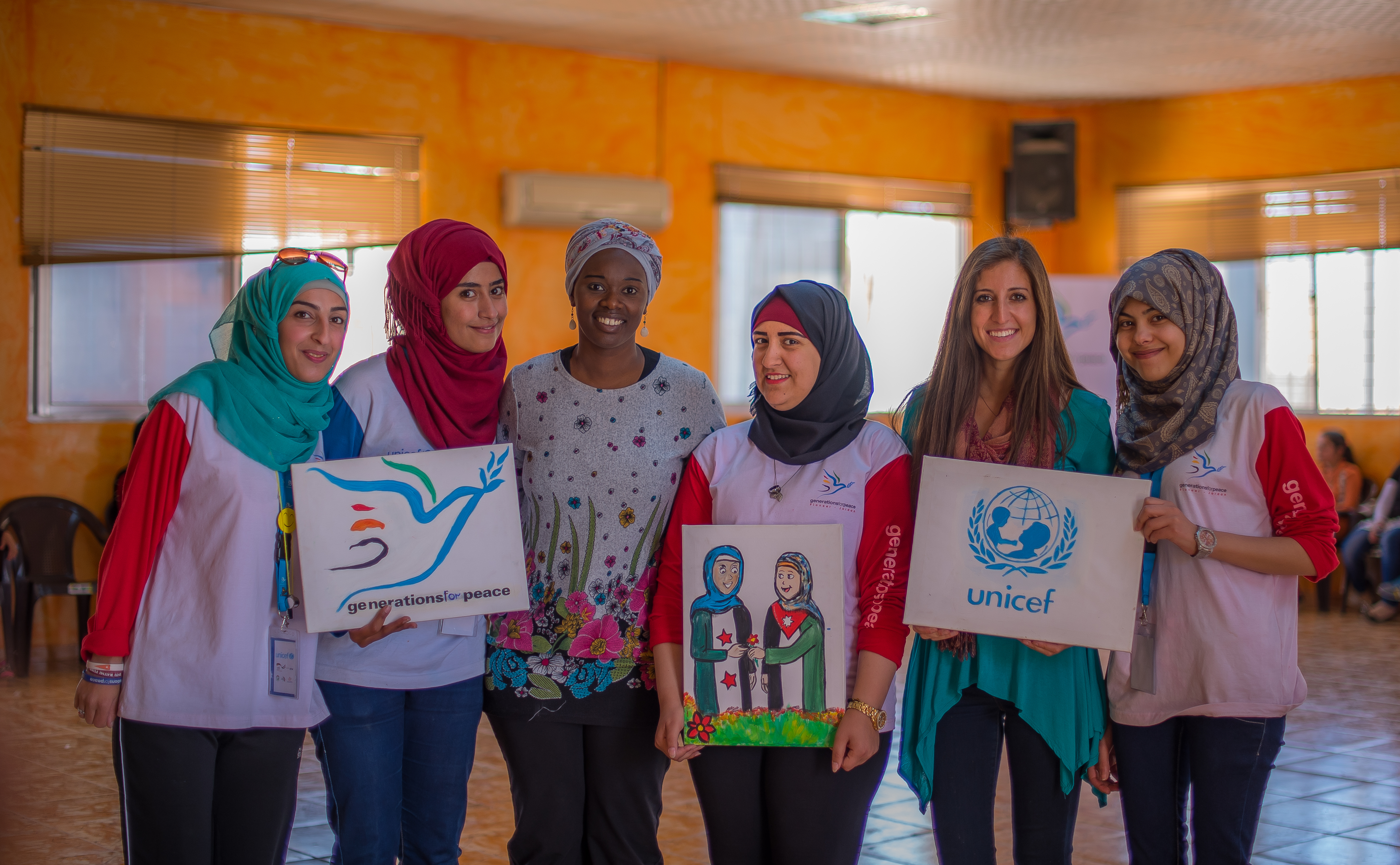 Rosie (second from the right) and GFP volunteers in Mafraq, Jordan

“We had everything in Syria – a beautiful house, a big garden, a nice family car. I never once missed a day of school. I dreamed of becoming a teacher. My dad and my older brothers had stable jobs. We lived a comfortable life. We were so happy.”

At age 14, Layan and her family were forced to flee their home in Syria after it was attacked. They had been warned that staying in Syria would become dangerous, but they did not believe it would reach them. Her family had just minutes to pack their necessities and run. They fled to a desert, where they stayed for almost three weeks, waiting for the siege of their city to be lifted.

“When we reached the desert so many other families were there, just waiting for things to return to normal like we were,” Layan recalls. “We quickly learned how to survive with what little we had. The only water source we had was very dirty and hot. I didn’t drink the water during the first week, but later my thirst forced me to drink the contaminated water just like everyone else had to. I don’t know how my mum managed to drink the water from the very first day we arrived – I guess she thought it was best for the baby.”

Already five months pregnant at the time of the attack, Layan’s mum made the gruelling trek to the desert with her family, unsure of what medical attention she would find once she left her home. After one week in the desert she knew something was wrong, so she made the decision to return to find the nearest hospital with Layan’s brother.

“They were gone for almost one week. We weren’t planning to stay in the desert for very long, but we couldn’t leave them behind. We had no way to communicate with them, and when they finally returned, my mother was white and much thinner. She looked at us and immediately started crying. Later, my brother explained that the doctors informed her that the shock from the attack must have killed my unborn brother. She had to have an emergency surgery to remove him from her body, even though my mother refused to believe them. To this day, she still has a large scar across her stomach from that operation. She wasn’t even allowed to recover properly because the hospital didn’t have enough space.”

Layan and her family had no time to mourn the loss of her brother though, as they received information that troops were being sent to attack the desert in the morning. Once again, they packed their belongings and made the decision to try to seek refuge in Jordan. They did not have any relatives in Jordan like the other families, but there was no other option. In the middle of the night, Layan, her five brothers, her three sisters, and her parents all walked to the Jordanian border with the hope of restarting their lives there.

“I never wanted to come to Jordan. I knew we had no other option, but I still didn’t want to come. I was so scared too. I kept thinking, what if we don’t make it to the border? What if they turn us away? Then what will we do?”

Luckily, Layan’s family was one of the first waves of refugees that Jordan took in. This meant that Jordan’s border control agents were much more lenient and allowed them to seek refuge without too much hassle. They were then transported to Zaatari refugee camp in Mafraq with the other Syrian families.

“My dad injured his leg during the walk across the border, and since we had no way of treating him at the time, he’s now permanently disabled and is unable to walk very well. My mum underwent surgery when we first arrived in Zaatari after we explained what happened, but her body didn’t recover well and she’s very weak… Look at me, right now I’m a refugee and I don’t go to school. I never thought I’d ever say that. But one day, I’m going to be a doctor – the best doctor in the world – and I’m going to cure my parents.”

A chant by the GFP volunteer leader signals the end of this break and Layan jumps up to participate in the next activity. She explains that for this activity, the girls will be put into teams and must work together to complete the assigned task. Each girl is given a clothes peg and is lined up with her team across from a laundry line stretched out by two GFP volunteers. They are told each girl must run to the laundry line and place the clip onto the line using just her mouth. 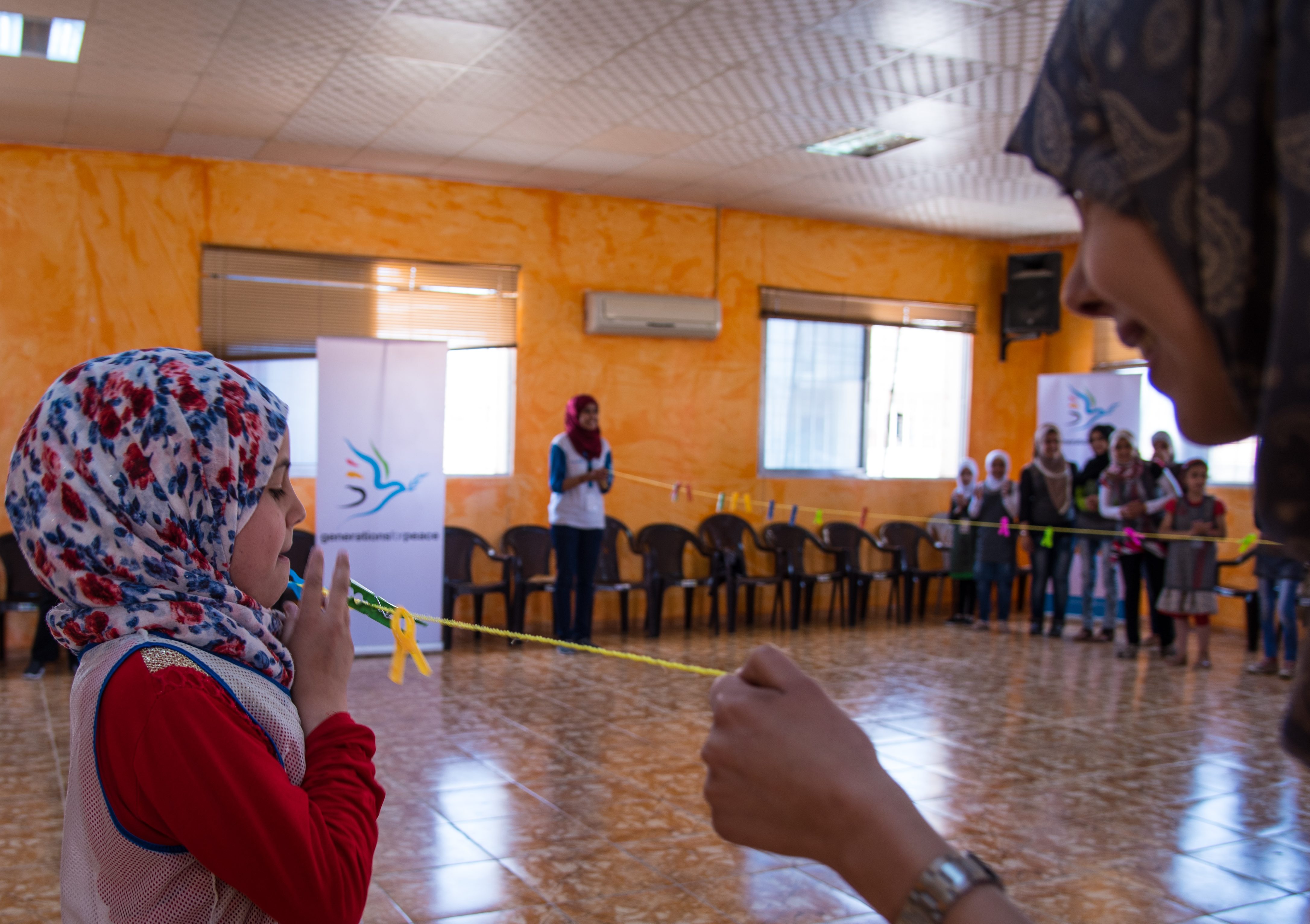 As soon as the game starts, each team starts cheering on the girl running up to the line. Some girls clap, some girls chant, but all encourage one another to run her fastest and focus on placing the clip onto the line. When both teams end, the girls begin cheering for themselves, laughing at how silly they may have looked with the pin in their mouth, and congratulating one another on how well they did. Then, they all turn and listen eagerly for the next activity.

I catch up with Layan again during the next break. “You know,” she starts. “I didn’t want to come to the youth centre at first. I thought it was a waste of time. My parents are both injured and life at home is really hard sometimes. We can’t go to school anymore and sometimes my brothers don’t make enough to support our large family. I didn’t understand how my little sisters could just leave that behind and play – I thought it was really rude of them.”

“But that right there is why I love coming here,” she beams. “Everyone is so encouraging and so positive. For a couple of hours every Saturday, everything is perfect. We play, we sing, we dance, we smile, and we laugh. And it’s not like in my dreams where I am back in Syria. It’s here and it’s now – and most importantly, it’s real.”

*The name of the actual individual and related photos have been changed to protect their privacy.