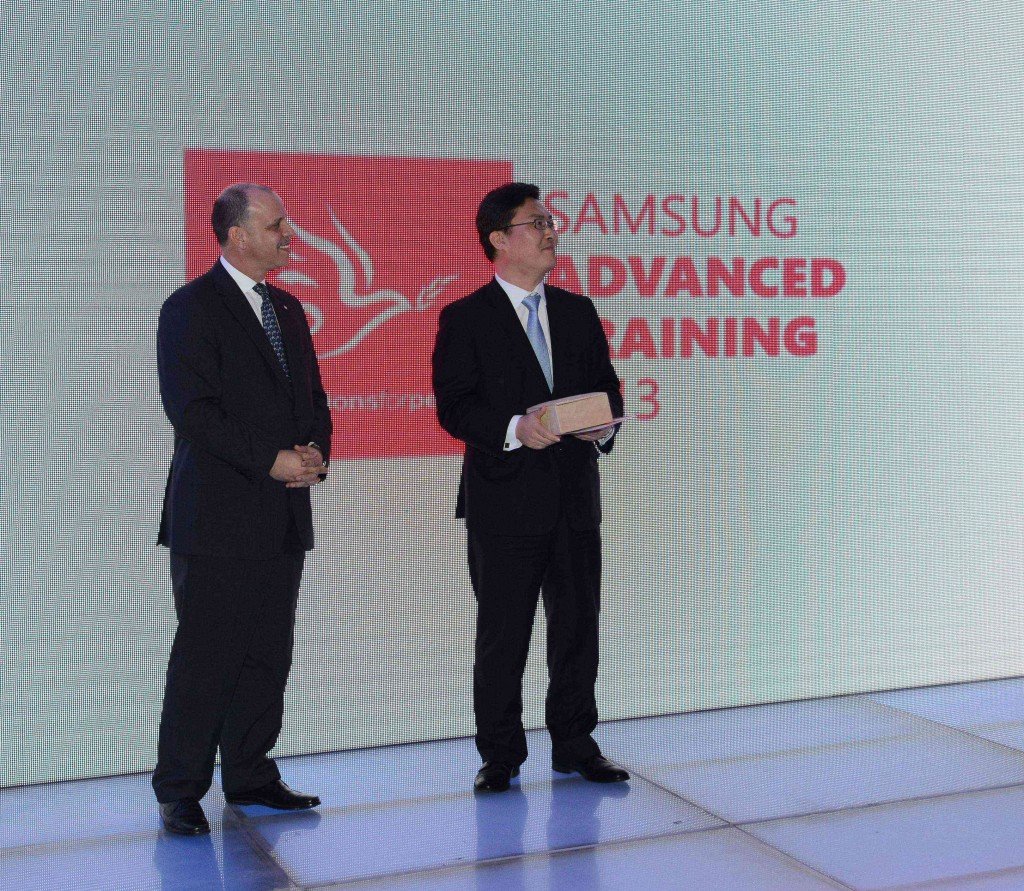 The Award for Innovation was awarded collectively to the team of “2nd generation” Generations For Peace volunteers in Aden, Yemen, for the creativity of their advocacy efforts to promote understanding, respect, diversity and social inclusion amongst local communities, internally displaced people and Somali refugees.

The Award for Quality was presented to Sanja Angelovska from the Former Yugoslav Republic of Macedonia for the quality of her programme methodology to address divided schools in multi-ethnic Skopje, where classes are segregated by ethnicity.

The Award for Impact was presented to Rasena Mohammad from Aden, Yemen. Founder of her own community development organisation, Social Services Association (SSA), supporting marginalised people and promoting inclusion and youth empowerment, Rasena’s personal impact is immense, and she is a live role model for the large pool of young volunteers, male and female alike, she has trained and leads by example to achieve real impact in their communities in Aden.

The Award for Sustainability was awarded collectively to the team of 2nd, 3rd, and 4th generations of Generations For Peace volunteers in Kaduna State, Nigeria. Demonstrating the power of the cascading model, these 181 youth leaders are running regular conflict transformation activities in six local government areas, reaching more than 5,000 children, youth and adults.

In remarks at the Gala Dinner, HRH Prince Feisal Al Hussein paid tribute to the Awardees and to all Generations For Peace volunteers around the world: “They live and work in diverse communities facing very different challenges, but they share the values of Generations For Peace – and a shared determination to take personal action to create a better future. They really are an inspiration to us all. As volunteers, as role models, trainers and facilitators, they are cascading values, knowledge and skills in conflict transformation to others in their communities, supporting greater understanding, tolerance and trust across conflict divides.”

Details of the four Awards:

The Award for Innovation was presented as a collective award to Marwa Abdo Ali and Yaser Altaf on behalf of the team of “2nd generation” of Generations For Peace volunteers in Aden, Yemen. Working with local communities, internally displaced people and Somali refugees, they show exceptional creativity in their advocacy efforts to promote understanding, respect, diversity and social inclusion. Their activities for International Day of Peace, involved local NGOs, Local Council members, community members youth, parents, and teachers, as well as some stars from the national football team, featured a song called the ‘Peace Operetta’, which they composed and recorded themselves a few days before. Sung in Arabic, English, Somali and French to reflect diversity, the song was an extremely creative way to raise awareness about the need for peaceful co-existence in a multi-cultural society. The song quickly gained popularity on YouTube and was aired on Aden Radio to an audience of 500,000. Despite political unrest, the work of the group continued and on International Women’s Day, the Delegates chose to honour eight women leaders in Aden, including Somalis, Palestinians and Indians, each engaged in different community work, such as elderly care, child support, cleaning services, education, the media, and NGOs. All these women have played a vital role for decades in their community, supported their families, and modeled the way for other females in Aden. They were honoured with appreciation letters, small gifts, and visits by the Delegates to thank them personally for their life-time of hard work and contribution to their community. One of these women was Amal Baljoun, a TV host of a show called ‘Maraseel’ aired on Aden Channel. Her letter was presented to her while she was live on air, and the whole episode was captured and aired on live TV.

The Award for Quality was presented to Sanja Angelovska from the Former Yugoslav Republic of Macedonia. Promoting interaction, social inclusion and improving communication in a multi-ethnic society is the focus of the peace-building programmes Sanja is delivering in the Skopje. In a country where so-called “divided schools” operate on a shift system so children from different ethnicities are taught separately and avoid any contact or communication. Being herself a psychologist and conflict resolution graduate, Sanja’s approach has been rigorous and systematic, building relationships and capacity over time through advocacy and training until there was readiness from stakeholders including the teachers, students, and parents for Sport-for Peace activities to be integrated into the schools, providing opportunities for children from different ethnic groups to interact, have fun, and break down stereotypes. Sanja’s approach demonstrates real attention to quality, based on feedback and reflection sessions with the participants and other stakeholders, supporting her monitoring and reporting and decisions to adjust and improve the quality of her programmes. Two years on, Sanja’s programmes are gaining acceptance and respect, showing that whilst overcoming long-standing conflicts takes time, with patience and solid programme design, change is possible.

The Award for Impact was presented to Rasena Mohammad from Aden, Yemen. Rasena used to be a maths teacher, and through her engagement with children and youth developed a strong passion for community work in Aden. In 2004, Rasena’s passion for community work led her establish her own community development organisation, Social Services Association (SSA), focusing on inclusion of marginalised people, poverty eradication, and youth empowerment. Rasena developed income generation activities for women and literacy programmes for children who left the school, followed by more advocacy initiatives emphasising the importance of youth voluntary engagement, as well as raising awareness about HIV and other health issues. Attending the Generations For Peace Camp in Abu Dhabi in 2009, Rasena gained knowledge and skills in conflict transformation methods she could really use for the conflict issues in her own community. She began a series of Advocacy Events, Sport For Peace Training, Train The Trainers, and Empowerment For Peace Programmes, week-in, week out. Through the training she built up new generations of Delegates and Pioneers willing to share the burden of responsibility and follow in Rasena’s footsteps. Rasena’s personal impact is magnified by her incredible networking ability and her connections with a wide range of local stakeholders. And for her second generation Delegates and Pioneers in Aden, she remains an inspiration to all of them, supporting them on their own Generations For Peace journey in Aden. Rasena is a live role model for young volunteers, male and female alike, leading by example to achieve real impact in their communities.

The Award for Sustainability was presented as a collective award to Babatunde Ayo and Abdiel Kude on behalf of the group of 2nd, 3rd and 4th “generations” of Generations For Peace volunteers in Kaduna State in Nigeria. First trained by Safiya Ibn Garba on her return from the Amman Camp 2008, a second generation of volunteer youth leaders from different walks of life in Safiya’s community in Kaduna began using sport as an extremely popular entry point to engage youth, and advocacy events to generate awareness and support in the community, including the education authorities and schools. So began a rolling series of Empowerment and Sport For Peace Programmes for more than 1,000 children and adolescents, addressing issues of gender, ethnic and religious divides. To expand their reach and sustain their activities for the long term, these 2nd generation Delegates also recruited and trained more volunteers, successfully cascading their vision, values and knowledge to a new group of 3rd generation of Delegates. They expanded to schools in three Local Government Areas in Kaduna State and even communities beyond the State. The activities also grew to include adult women and men in income-generation skills training. In 2012, a 4th generation of Delegates were trained bring the total to 181 second, third and fourth generation youth leaders from six local government areas reaching more than 5,000 children, youth and adults with their activities. Last year a Generations For Peace Satellite Office was established in 2012, run by Pioneers and offering four quarterly internship opportunities for outstanding Delegates each year. This has strengthened administrative and operational capacity, and provided a solid support to sustain their activities.