Shaping Peace Together | Lessons from the North Republic of Macedonia

By Rosie Awad, Communications Specialist at Generations For Peace

“Inclusive peace is sustainable peace. Only when we all work together will we be able to shape peace effectively…”

The words echoed in Branka Markoviki’s head. She smiled with pride as she overlooked at the audience who immediately erupted with applause at the speaker’s remarks. Youth and adults from all different backgrounds, religions, and cultures were gathered as part of a community initiative conducted by the Generations For Peace team in Tetovo, Republic of North Macedonia in order to promote coexistence and peace.

As a Serbian born in Kosovo, who later moved to the Republic of North Macedonia, Branka had lived in the midst of conflict but always believed a more peaceful future was possible. Since its independence in 1991, the Republic of North Macedonia (Formerly known as the Republic of Macedonia) has been plagued by tense relationships and clashes between Albanian rebel groups (the country’s largest ethnic minority) and the Macedonian army. These tense relations peaked in early 2001 when the National Liberation Army made up of ethnic Albanian rebels amplified attacks on Macedonian security forces near Tetovo and Skopje, demanding more rights. The result was widespread violence. “2001 was a terrifying year. During this time, we found ourselves rushing to pack our suitcases with basic clothing and personal documents, ready to run away at any moment. I feared the most for my two daughters. I was afraid we would be killed,” Branka shares.

It was this fear that sparked the need for change in Branka. She knew she wanted to be a part of the change. 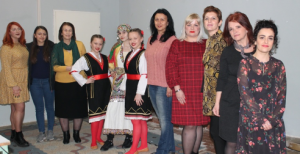 Gezime (third from the left) stands with fellow Generations For Peace volunteers and participants, a strong testimony to the fact that women are always the frontliners when it comes to peacebuilding

Her lifelong friend Gezime Haredini shared her desire to create positive change. Gezime, who is originally Albanian, had also experienced firsthand the effects of the ethnic intolerance but was determined peace was possible. “We as the older generation need to practice tolerance and acceptance because we are the role models for the generations to come. We all are born in the same country, and therefore, we all belong to it,” believes Gezime.

Their shared desires to build peace and make a difference in their community led both Gezime and Branka to join Generations For Peace in 2016. They quickly got involved in collaborating with fellow citizens of all different backgrounds to determine local problems and craft appropriate solutions. “Once we were able to build trust amongst our team and local citizens, we saw just how powerful our collective voice could be to shape peace. This made us unstoppable,” reflects Gezime.

The team knew it was time to involve the community, so they began brainstorming initiatives that could work. They also knew it was vital that all sides were represented and that community members were more likely to listen to their religious leaders as they trusted them. It was these realisations that allowed them to craft an effective initiative; they decided to hold meetings with three religious leaders – the leader of the Orthodox Church, the Muslim Community, and the Bektashi Community – to allow all three leaders to speak on the importance of coexistence and how to work towards it.

Their first meeting took place in the Bektashi Community at the Arabati Baba Teke, where the group was welcomed by the Dervish. “It was an amazing experience,” said Gezime. “During this meeting, the Dervish explained the Teke’s four doors were symbols of openness, meaning anyone regardless of their religion, nationality, gender, economic status, age, etc. was welcome to enter the Teke. It was really beautiful to see how acceptance was heavily emphasised.”

The second meeting took place in a Christian church, where the group was welcomed by a priest. After the tour of the Church, the priest began to share how important tolerance is to the religion. Reflecting on what she learned, Gezime shares, “We listened closely as the priest described the festival that is held to celebrate Easter in which eggs are decorated and coloured. It is customary for those celebrating to share these eggs with their family members, neighbours, poor people, and other people, regardless of their religious background. Tolerance is clearly intertwined in this faith.”

The last meeting took place in a local mosque, where the group was welcome by an Imam. The group had the opportunity to stroll through the mosque to see the praying areas and lecture halls, before learning more about Islam from the Imam. “Islam encourages everyone to care for one another, despite their background. The importance of solidarity is seen in the Zakat (the obligatory giving of one’s wealth to those in need) and the requirement of sharing animal meat with the poor, regardless of their religious beliefs,” Gezime shares. 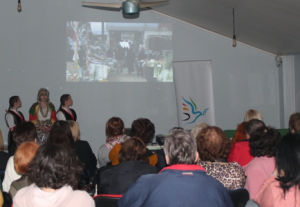 The three visits highlighted multiple similarities between the religions, but more importantly, they stressed the importance that all religions place on acceptance, tolerance, care, and solidarity. It was these lessons that the group shared in the open community event. It was these messages that were welcomed so positively by the greater community. “ We did it,” Branka beamed.

The successful completion of this initiative inspired them to do more, and as they look to the future, they are exploring more ways of sharing the message of peace and coexistence throughout their community to engage even more people to create positive change. Branka believes, “We can be the change we want to see by ensuring constant communication and maintaining mutual respect for those of different backgrounds. We will only be successful in shaping peace if we work together.”