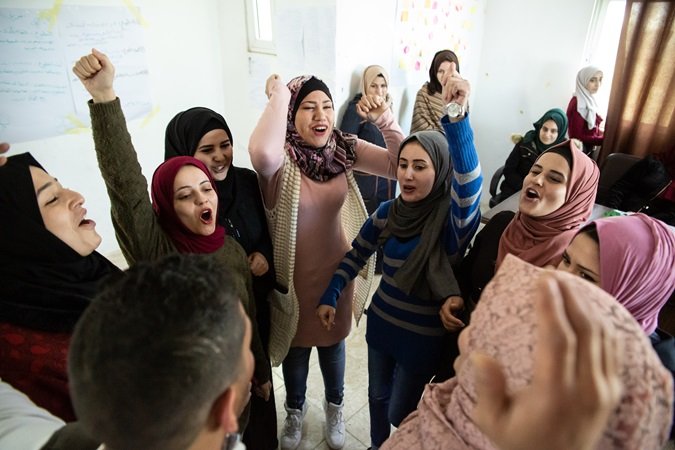 UN Women Jordan – 16 September 2019 – Tucked in the hills of Jerash in northern Jordan, the community of Al Jezaz is built on traditional values and attitudes regarding gender roles.

“Jerash is a very conservative area. The role of the relatives and community have a large influence on women’s lives here,” explains Generations for Peace (GFP) facilitator Abdul Kareem. Understanding the negative impact these perceptions can have on youth and on women in particular, he is working on building a gender-equal community.

The GFP-run ‘Maharati’ Programme is teaching young women about social cohesion, participation and leadership by engaging women through sports and life-skills activities, to enhance gender equality and women’s empowerment. In close partnership with UN Women, the programme will reach 300 public schools and 200 youth centres across Jordan by the end of 2019.

The Al Jezaz youth centre is brimming with laughter and young women who are eager to learn. At the front of the classroom, Kareem, beams as the women describe how to become critical thinkers and challenge assumptions. He has been mentoring these women for nine sessions now and has watched them transform: “The women are becoming more confident, assertive, challenging different points of views and fostering discussions, both in the centre and at home.” 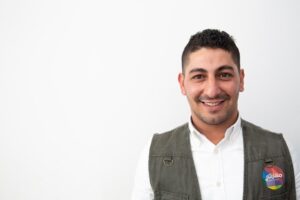 Last year, the 28-year-old left his job as a teaching supervisor to become a full-time facilitator at GFP. “There is clearly an important need to work on gender inequality and the societal norms which surround gender,” says Kareem, adding that he had noticed negative attitudes in the schools where he previously worked, which sparked his interest in working for change.

To overcome social conventions about interaction between men and women, Kareem invites parents to meet him prior to teaching their daughters.

“I think it is important specifically within these communities, to allow parents to be involved and have their voices heard. Their involvement has allowed us to take this massive step in breaking these silos between men and women.”

In fact, Kareem is one of the few male facilitators who has been able to mentor young women in this area. Although it is a big step for the women, their relatives and the local community, Kareem foresees a future in which women and men can attend sessions and play sports together.

“Sessions like these would be more effective if they were mixed,” he says. “That is where I want to build up to, there is so much more room for fruition if men and women could work together.” 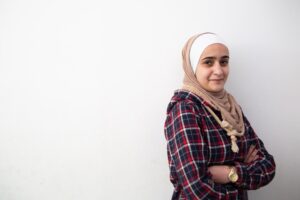 Balqees Fraihat, 19, says she hopes others will have the chance to grow stronger through this course, as she has. Photo: UN Women/Lauren Rooney

One of the young women taking part in an activity Kareem is guiding, 19-year-old Balqees Fraihat, volunteers to showcase her acting abilities by portraying a male waiter in a skit depicting community gossip.

“Before I started these sessions I would have never had the confidence to act and do that in front of other people,” admits Fraihat.

She relates the sketch – which illustrates the negative impact communities and relatives can have on young women – to her experience in joining the programme. Initially, her relatives had been opposed, but with support from her parents, she has been able to attend all the sessions.

“This course allows women to see what other women from the community are capable of doing and learning. I can feel my personality is becoming stronger, my communication is becoming better, and I am beginning to self-manage my own life,” she says, smiling.

Fraihat feels she is now a completely different woman to the one who walked in the door on the first day, and now plans to return to school to resit her failed exams. “The idea of repeating my exams made me feel sick, I did not want to fail again. But since joining the sessions and understanding how to learn in a new way, I now have the confidence and desire to go back and take this opportunity again.”

At the end of the session, Kareem gathered the participants together for afternoon sports activities, working together to strategically move across the floor in a game of human chess. Fraihat, Kareem and other participants leaped, skipped and cheered as the game brought them closer together. 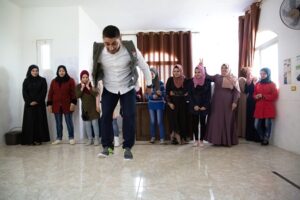 The participants in the ‘Maharati’ training session join in on a game of human chess. Photo: UN Women/ Lauren Rooney

The game highlighted the importance of taking steps forward – a metaphor for the steps these women must take in their own lives and communities.

The partnership between UN Women and Generations for Peace, through the ‘Maharti’ and ‘Nashati’ programmes, promotes gender equality and women’s empowerment through the use of sport as an effective driver of social cohesion and civic engagement. Under the programmes, more than 410,000 vulnerable Jordanian and Syrian refugee youth will be engaged in sport-based and art-based activities.