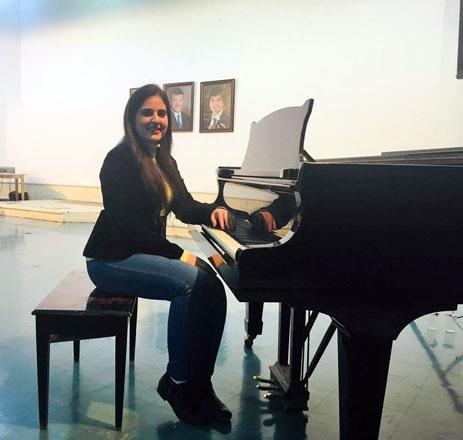 The Jordan Times 18 September 2019 – Through her passion for music, Maria Haddad, a young Jordanian woman has been inspiring many others, according to the head of the Ajloun Female Youth Centre.

“Maria started with us at the centre at a young age, and now after years she has become a skillful musician who trains the girl choir with the aim of reviving the Jordanian music heritage,” the head of Ajloun Female Youth Centre, Suhair Qudah, told The Jordan Times.

Haddad’s beautiful voice and her ability to play the oud developed into a medium to teach Arabic to non-native speakers with the aid of music, Qudah said.

Haddad is specialised in the piano and the lute. She received her master’s degree after completing her thesis titled “The impact of music in improving Arabic language teaching to non-native speakers”, Haddad told The Jordan Times on Tuesday.

“I started teaching Arabic using music three years ago in preparation for my master’s thesis. I teamed up with the language centre at Yarmouk University, where I taught students from 13 different nationalities,” Haddad said.

“Through music, all 13 languages became one, and the reason it was enjoyable is that Arabic and music are both based on rhythm,” she said.

She said she also aims to spread the message of “patriotism and peace”, especially since she joined the organisation Generations for Peace in 2017.