Young Women are Shaping the Future of Peace Building 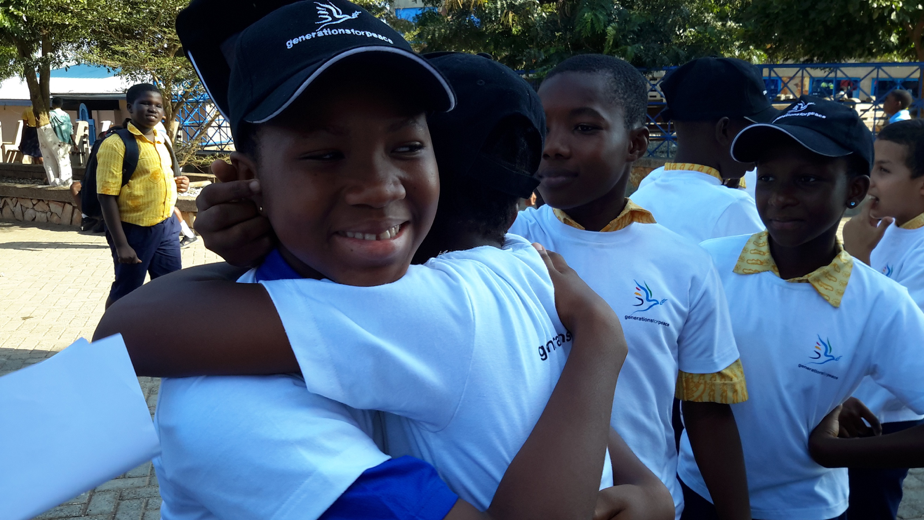 “On one hand, I am intelligent and an achiever, but on the other hand, I was disgusting and shameful.”

Her lips curling into an uneasy smile that poses a striking antithesis to her resolved demeanour, Salma Bastimi confesses that her strong-willed personality has made growing up as a young girl in West Africa challenging. “The confusion between who I wanted to be and my very bad attitudes always bothered me,” she observes with remarkable self-reflection for a child who has yet to reach even her teenage years. “It was this state of confusion that prompted me to start and sustain many unnecessary conflicts with my peers, seniors, parents, and community at large.”

Much of her confusion might stem from her being a young Ghanaian girl. While it is true that women in the country have taken exciting steps forward and have set in motion efforts to continue this trend, they still fall behind men in many regards, including education and economic opportunities.

Ghanaian women like Salma face lower rates of youth literacy than their male counterparts, and while men and women have nearly equal enrolment rates in primary education, the numbers shift as they transition into secondary school. By the time women enrol in tertiary programmes, they will find over three-quarters (77.6%) of the girls who had attended primary school with them have dropped out somewhere along the way.

These rates cause a rather predictable and direct effect upon Ghanaian women’s economic opportunities: in 2016, men outnumbered women by over one-third (up to 35%) in the workforce, depending on income bracket.

Given this reality, it is perhaps less surprising that Salma – with her unwavering commitment to reach the highest educational level – had struggled to shape positive attitudes and relationships with her peers in her earlier years. 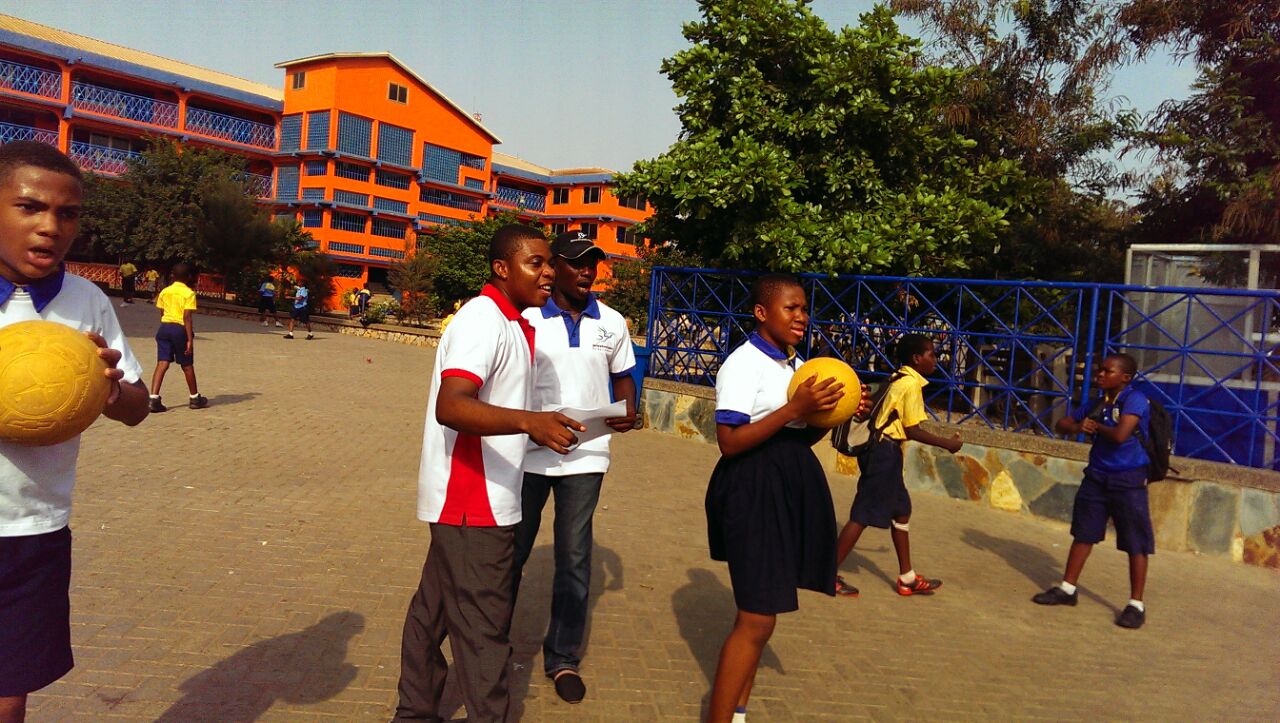 Salma (on the right, holding the ball) has now overcome her struggle in shaping positive relationships, and can be seen here playing with friends at Saint Peter’s Mission School

Salma’s dark eyes glisten while she gathers her thoughts, lending them a powerful voice from beneath the Generations For Peace baseball cap pulled tightly around her hair. Set against the backdrop of Saint Peter’s Mission School in Accra, Ghana, the twelve-year-old student explains how she has always admired strong women making a difference in the world.

“I look up to exceptional people like Funke Akindele and Nana Aba Anamoah,” Salma raves through the gap between her two front teeth, “who are using talents and position in life to affect kids and society positively.”

In a world where Salma justifiably feels that many women are not met with high expectations or opportunities professionally, the two women she admires do, indeed, wield tremendous influence over West African children and society on the whole.

Funke Akindele is a Nigerian actress known for her comedic roles, including one in a sitcom called I Need to Know, which was funded by the United Nations Population Fund (UNFPA). However, Akindele is more than an actress: she is a tireless activist for the rights of youth – especially women – most recently calling for an end to student flogging in Nigerian schools in January.

Nana Aba Anamoah, is no less impressive: she has made waves for her far-reaching success as a Ghanaian journalist and radio- and television host, despite struggling as a student and receiving low marks in her courses.

In the eyes of Salma, these women have given themselves purpose, and in doing so, have brought justice and inspiration to many lives across Africa. After praising the women, however, she is quick to ask a candid question of herself:

“How can I become like these high flyers or even surpass them,” she asks, refusing to leave her steadfast confidence unchecked, “if I don’t develop attitudes and skills such as excellence, diligence, teamwork, and relationship-building?”

Salma’s self-assurance and headstrong nature have not gone unnoticed, largely due to her attitude surrounding them. On the one hand, they have given her the confidence to reach for noble, towering dreams. The schoolgirl hopes to become a doctor, providing affordable healthcare in her community, which currently maintains a limited number of facilities – all of which charge often unattainable fees to would-be patients.

Yet the same qualities that fuel her ambitious aspirations have brought about an immense weight of loneliness in her life – too much of which, she admits, was self-inflicted.

“I used to look down on the poor, minority groups, and disadvantaged Africans in general. Many times, I blew up friendships with my pride and egocentric feelings. I always found ways to undermine or look down on others.” Her blue school uniform peers out from beneath her Generations For Peace T-Shirt as her classmates run behind her, playing in the Sport For Peace programme put on by volunteers of the prominent Jordanian NGO.

Watching the students joining together in the youth-leadership and peace-building activities, Salma adds, “When we were in primary, boys and girls did not socialise that much.”

Salma’s loneliness brought her to Generations For Peace during her final year of primary school. Since then, she has begun to build and find peace in her internal conflicts and her outward relationships. 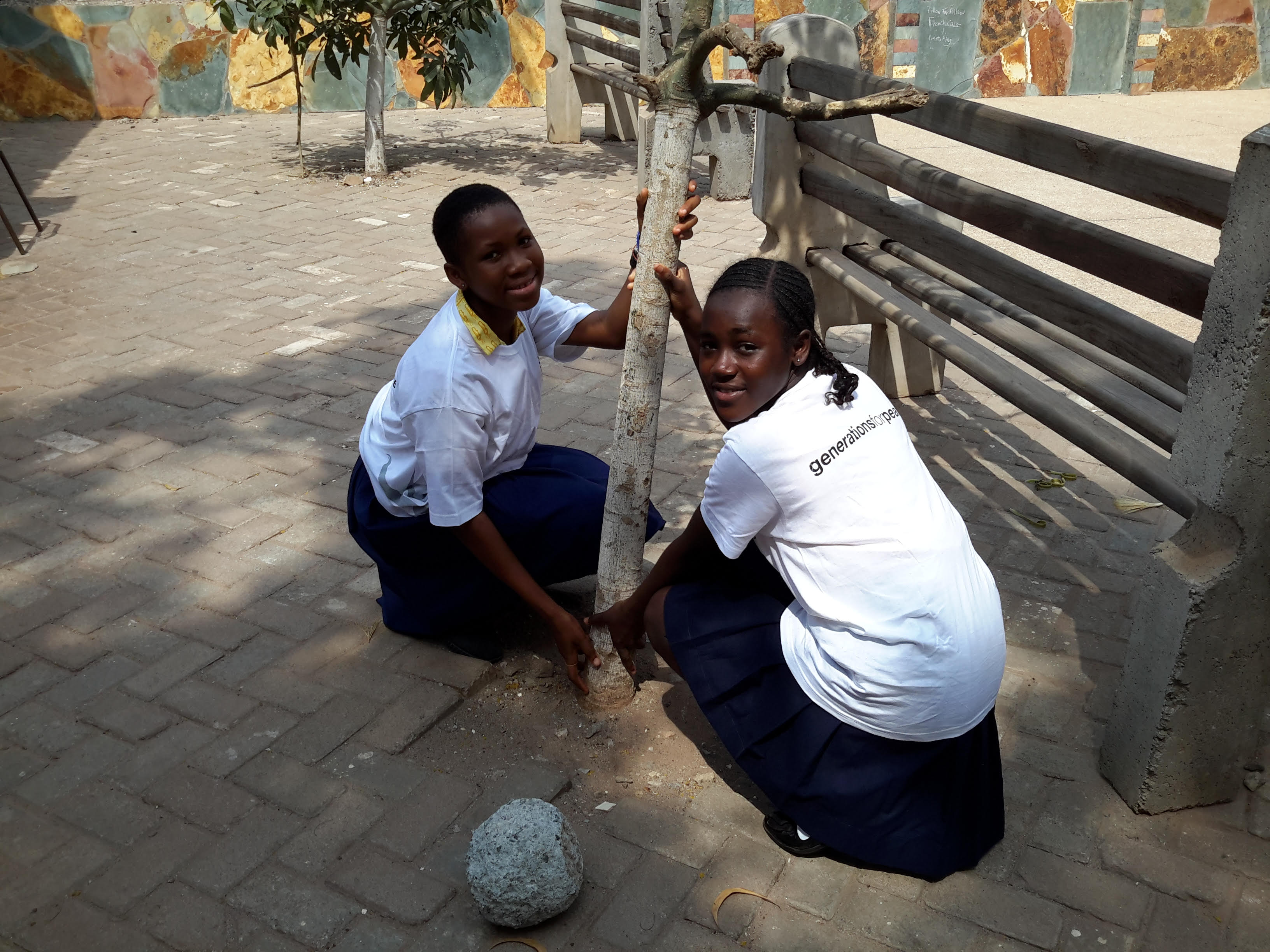 Salma (left) and Diana (right) working together during a Generations For Peace programme in Accra, Ghana

Now a leader amongst her peers in the Sports For Peace Programme, Salma has found a new role model to add to her list of strong and inspiring women. Diana Acheampong, a senior at Saint Peter’s, strikes a balance that her younger friend is proud to be learning about for herself from an older girl in her community. “Diana is able to express confidence and assertiveness without being condescending to others…she respects all those around her – including younger children and her peers.” Salma continues with an undertone of appreciation, “Her attitude is a great inspiration for my resolve to build better life skills and attitudes.”

Salma is still in the midst of a transformation, grappling with the struggles that come alongside being a young woman in Ghana. Now, though, she is well on her way to changing the world and becoming the next Funke Akindele, Nana Aba Anamoah, or maybe even Diana Acheampong.