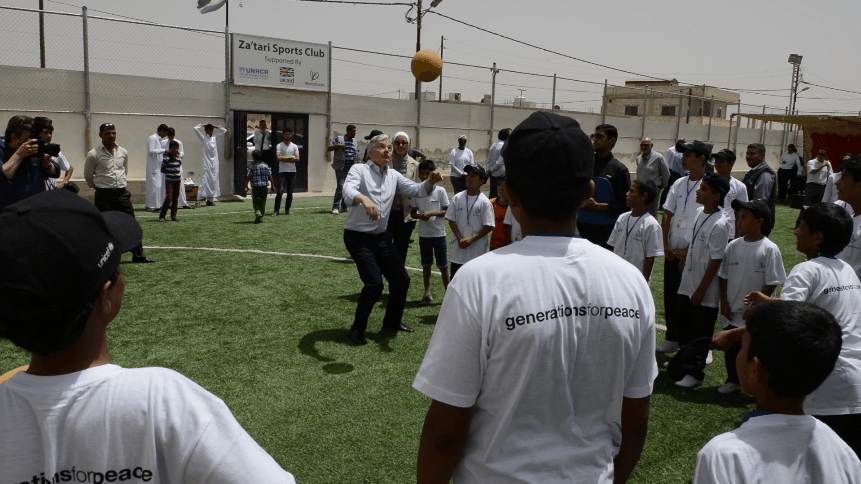 16 June 2015 – Last week, we were honoured to host a delegation from the Embassy of the Kingdom of Belgium in Jordan and His Excellency, Mr Didier Reynders, Deputy Prime Minister and Minister for Foreign Affairs, to the Generations For Peace headquarters in Amman and one of our programme sites, Za’atari village community centre. His Excellency Mr Thomas Baekelandt, Belgium’s Ambassador to Jordan, and many members of the Belgian press also joined the visit. Before traveling to Za’atari, the delegation met with Generations For Peace Founder and Chairman HRH Prince Feisal Al Hussein for a short briefing at GFP headquarters in Amman.

Za’atari village, like many others in northern Jordan, is hosting a large number of Syrian refugees and is particularly vulnerable to the prevalence of violence and challenges of social cohesion between refugees and host communities. Generations For Peace (GFP) has been conducting ongoing sessions with Jordanian and Syrian youth in 12 locations to foster greater social cohesion between refugees and host communities, including a mix of sport and arts activities. In Za’atari village, about 40 male youth have been participating in the programme, which is led by GFP volunteers who were trained earlier this year. GFP’s programme, supported by UNICEF and conducted in close partnership with the Jordan Hashemite Fund for Human Development (JOHUD) and the Higher Council of Youth, will benefit 5000 youth in vulnerable communities in Jordan by the end of 2016. 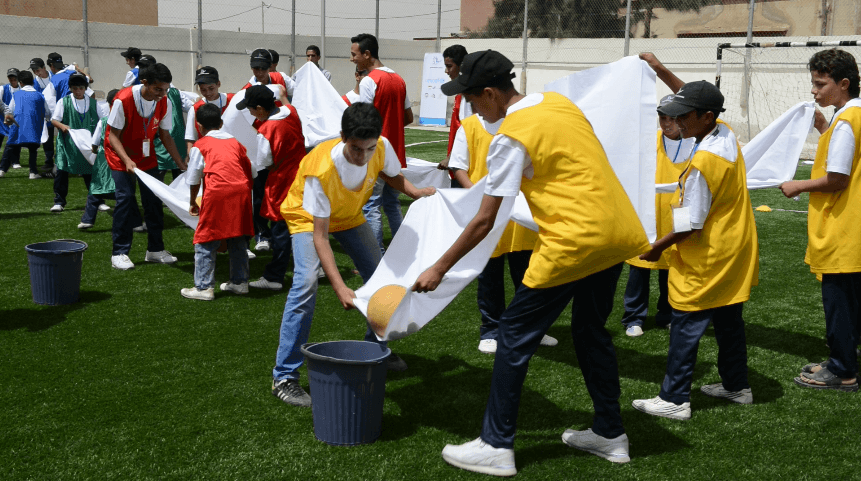 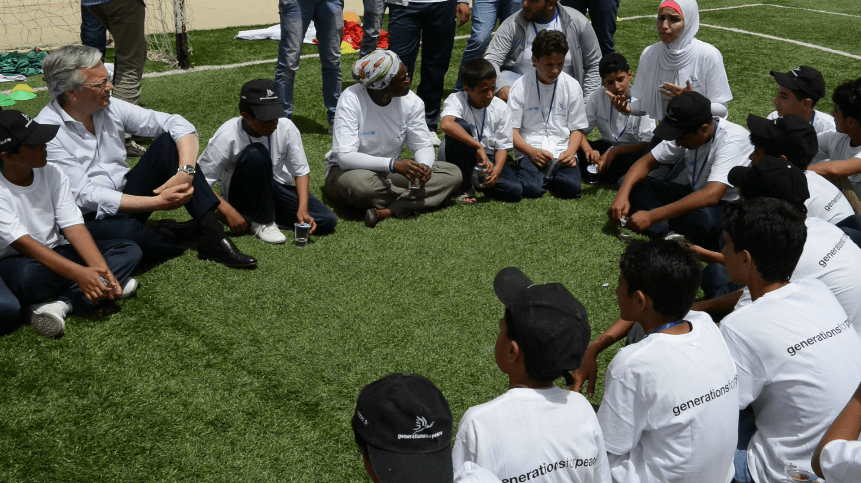 After observing sports-based activities in which mixed teams of Jordanian and Syrian youth worked together to achieve their task of moving a ball across the field to a goal bucket, the group gathered for a facilitated reflection session about the activities and what they have learned in their time together. This group of youth has been participating in on-going activities for several months, so they are now comfortable and friendly with one another, and more willing to speak openly about their experiences (although the many media cameras on this day caused a few shy moments). 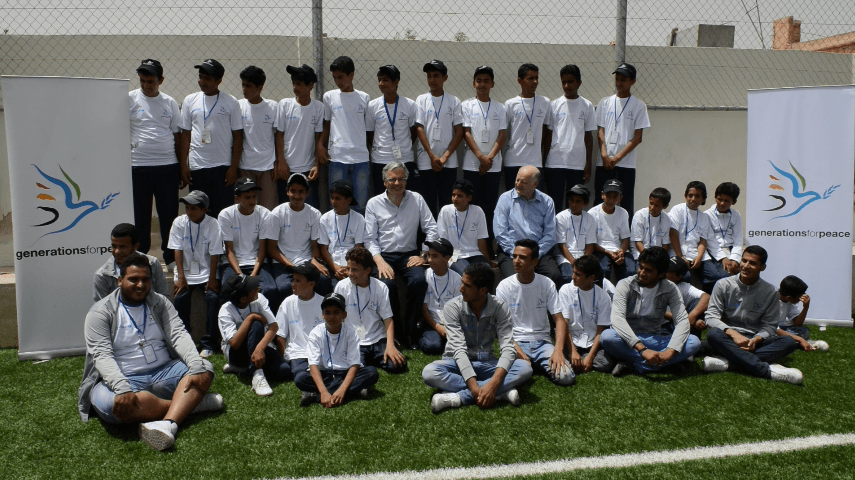 There was time for a few group photos, obligatory “selfies” with participants, and media interviews with volunteers and youth. Then, HE Minister Reynders volunteered to play football with the youth, and to everyone’s surprise, walked straight to the net to play in goal! The young boys were thrilled to show off some of their shooting skills, in spite of (or perhaps now encouraged by) the cameras snapping away to capture the moment. 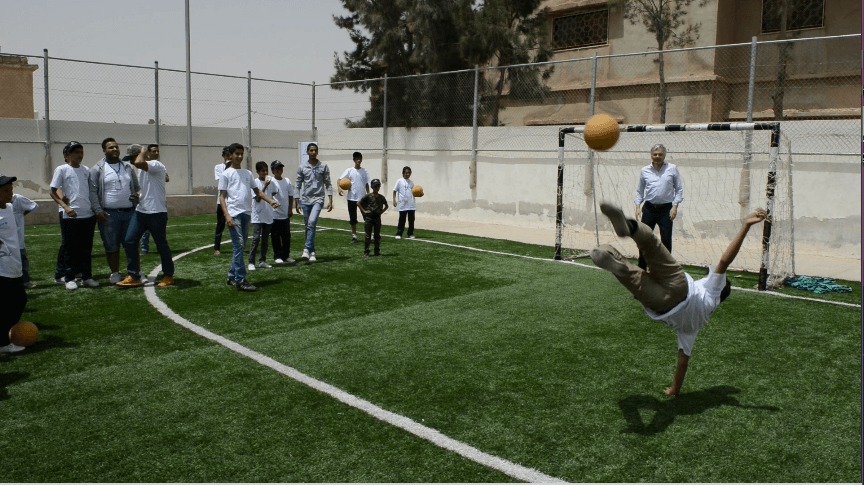 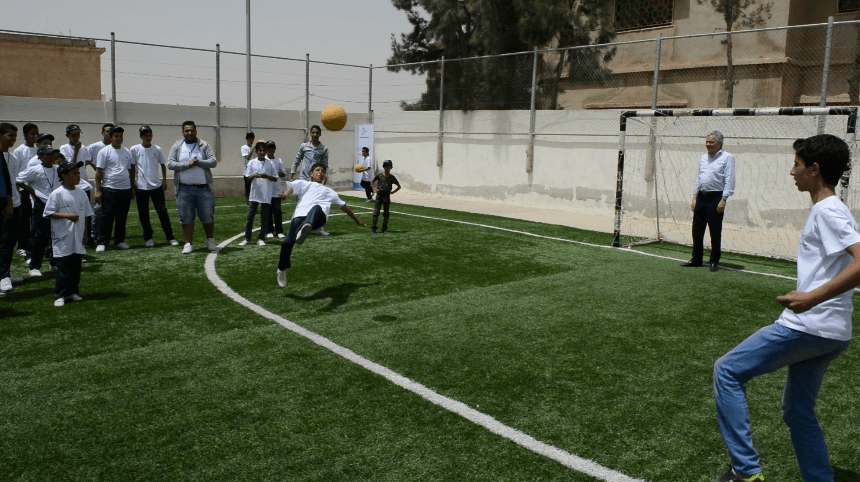 Despite the very hot temperatures, it was an excellent day for everyone involved, and one GFP, our volunteers, and participants will not forget anytime soon!