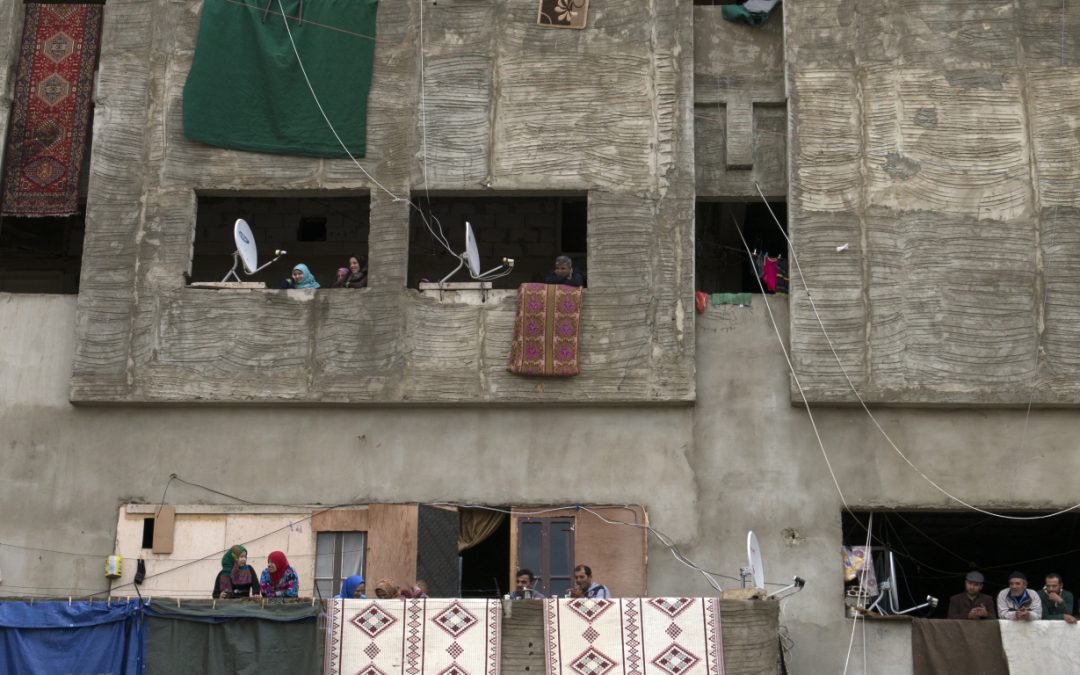 Imagine your life is defined by a before and after. Many of us can relate to this idea. Those of us who have experienced illness, bereavement or a great upheaval can pinpoint a moment when life as we knew it was turned on its head. In the midst of this realisation, a silent voice screams out – things will never be the same again. It is painful and challenging, but somehow, we find a way through the murky waters. Propelled forward by an innate survival instinct, we navigate the wave of raw emotions and find comfort in treasured memories of times gone by.

While the days feel long, life does get that little bit easier, usually without us even noticing.

And day by day our after falls into place.

Picture this. You are forced to quit school, and your home is no longer safe to inhabit. You find the death of your next door neighbour’s daughter tragic, but it does not shock you the way it used to. Instead, you silently pray that you will make it through another day, or perhaps you don’t. Maybe you need it to be over. Imagine your before was your childhood, but now you are the primary breadwinner for your family. Forced to leave behind everything you have ever known, you hold on tight to memories that are now your most cherished possessions. Crossing the border into an unfamiliar land, you carry the weight of the world on your shoulders, unequipped for the new reality you have been thrust into without warning.

As you take a moment to absorb your new surroundings, all that runs through your mind is, I don’t belong here. 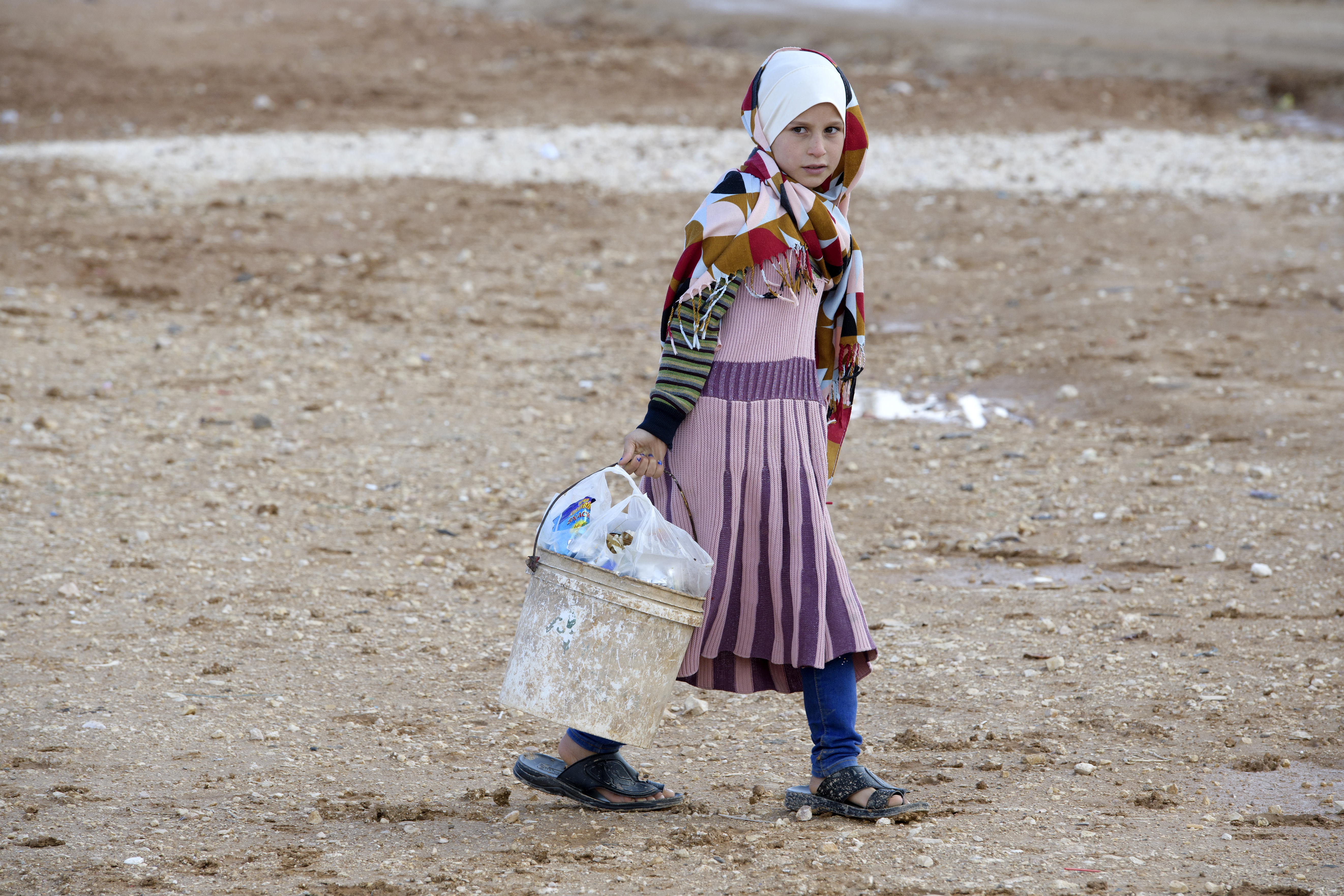 I have asked you to imagine this scenario, but for many, it is a grim reality. Reports in 2016 stated that 65.6 million people had fled their homes worldwide due to violence, and from this total 22.5 million are refugees – half are under the age of 18. These numbers are reaching record highs; in statistical terms, 20 people are forcibly displaced every minute due to conflict. Over the last four years, I have met Palestinian and Syrian refugee youth in Lebanon and Jordan who are no longer in school, and young people who have lost friends and relatives while they found refuge. Avoiding a downward spiral is difficult when the odds are stacked against you; it is so easy to let go.

When you no longer believe in a just world, hope slips through your fingers like sand.

And slowly but surely, your heart and mind begin to build walls that are hard to tear down.

I have interviewed youth who want to do great things but believe their efforts are in vain. On the cusp of adulthood, they are giving up. Some dream of becoming architects, fashion designers or doctors. Some want to go home one day to rebuild their country and are surviving by clinging to this hope alone. Some are unable to forge new friendships – they have lost too much. Some were born into established camps, their identities torn apart by circumstances beyond their control; the country they were born in does not recognise them as citizens. Stuck in a stateless limbo, they fight a losing battle. Today, 10 million people are stateless worldwide – and as a result, are denied access to fundamental human rights that many take for granted.

Unsurprisingly, there are also youth who no longer dream – “what’s the point?” they ask themselves. Searching for meaning in their lives once more, they risk being drawn into a dangerous web they may never escape. Some ‘pull’ factors related to their pathway into violent extremism pertain to a sense of belonging and search for identity, while ‘push’ factors include social marginalisation, inequality, feelings of injustice and hopelessness. That said, it is important to note that one reason does not ring true for all; motivating factors are context-dependent.

So how do you support youth whose lives have been altered by the unimaginable? Where do you even begin?

Familiar with emergency humanitarian responses to crises, I had not spent a lot of time considering the after. In simple terms: when the violence subsides, what remains? Previously, I focused on the practical and tangible needs of people affected by conflict. But therein lies the problem; too often, society forgets that escaping war is not a fix-all solution. The psychological ramifications live on and can manifest themselves in sweat-inducing nightmares and debilitating flashbacks that while not visible to others, remain as alive and terrifying as ever for the victims. They can experience anxiety, stress, and distrust – feelings that may never truly dissipate. Some additional concerns include social isolation and school dropout rates. While many show extraordinary strength and resilience, it is important to remember that the temporary band-aid of escape can mask the horrors that live on.

Today, 13.1 million people need assistance in Syria; 6.1 million are internally displaced, and more than 5.4 million people have fled the country. Together, Jordan and Lebanon have absorbed more than 1.6 million registered Syrian refugees. However, the real number is widely known to surpass the official data. As a result of the enormous influx of refugees in these countries, many schools have adopted a two-shift system, labour exploitation is rampant, social services are stretched, and poverty rates have increased, thus affecting local people too. Endemic child labour and early marriage among refugee youth also reflect harmful coping mechanisms on the rise. Unsurprisingly, communal tensions have increased, highlighting the need to address emerging vulnerabilities.

It took me a while to grasp the work of Generations For Peace (GFP), a Jordanian peace-building organisation. I remember thinking, how can sport and arts-based activities, among other tools, support youth who have faced immense tragedy? What difference could they make in communities on the brink of breakdown? How could they bring people together? In my case, it took speaking to volunteers and youth about their first-hand experiences to really appreciate GFP’s impact. A true grass-roots initiative, GFP trains volunteers in peace-building knowledge and skills, providing them with the confidence and tools to ignite positive change. These determined individuals know the issues, struggles, risks and divisions faced by the people in their local communities. Their investment is personal, and their commitment is palpable. I have been fortunate to work with many volunteers across diverse countries, and I am always blown away by their passion and dedication. Working in communities affected by various forms of conflict demands a tenacious spirit and strength of character. There is no doubt about it, GFP’s peacebuilders are in it for the long-haul. 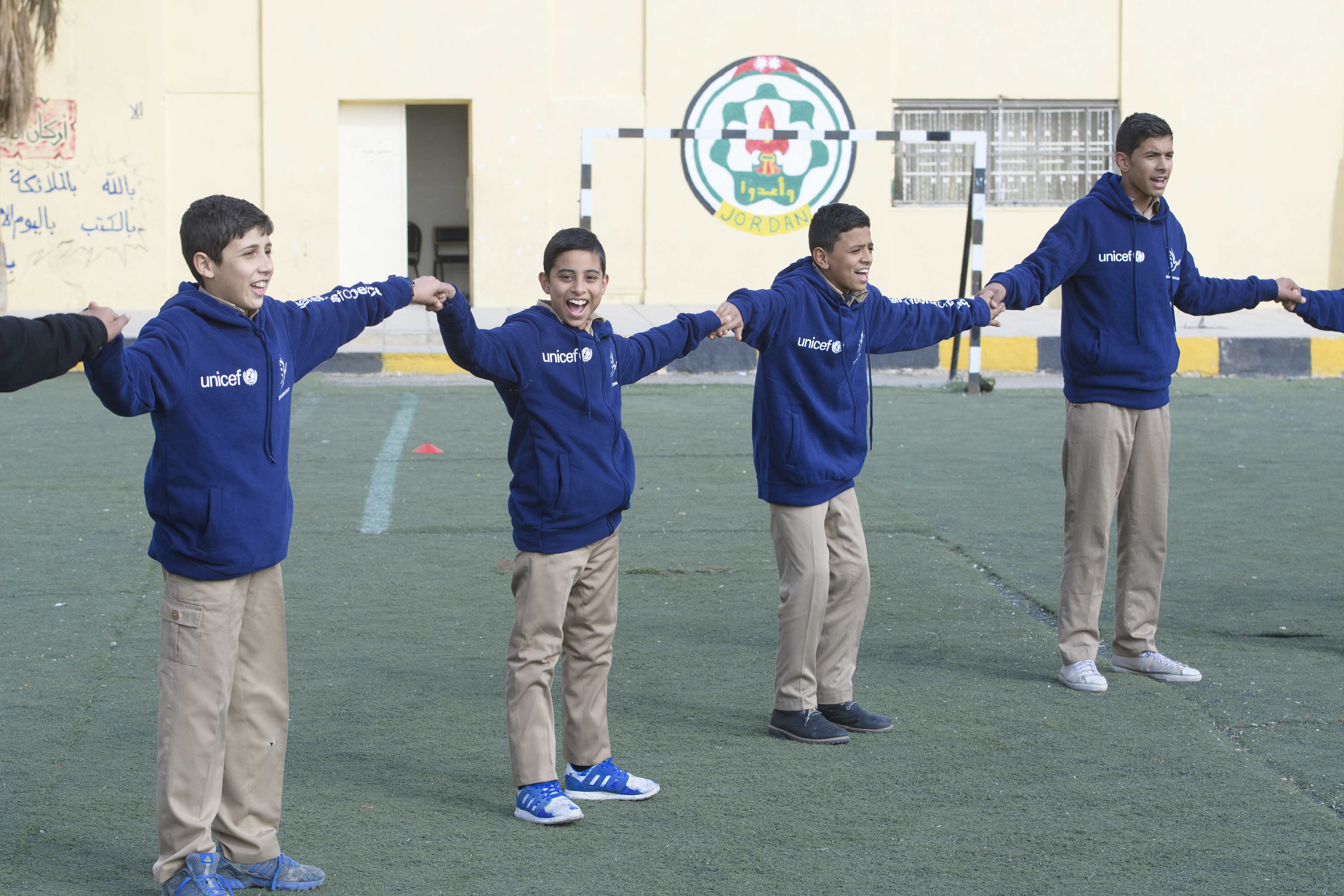 In Jordan, volunteer leaders of youth are building greater social cohesion, acceptance, and trust among Syrian refugee and host community youth. Volunteers also work in schools where the focus is on equipping children with life skills such as cooperation, acceptance, self-responsibility, inclusion – helping students learn how to work and live together. In Lebanon, GFP volunteers reach out to vulnerable youth across the country to reduce the risk of violence among Syrians, Palestinians and Lebanese. They aim to strengthen resilience in communities under pressure by supporting positive social change and educating youth on the respectful practice of human rights. GFP’s volunteers tackle issues head-on in the hope of avoiding future woes – they know they are stronger as one.

A few years ago I met Khadija, a Syrian refugee living in Saida, Lebanon. Desperate to reach Europe with her family, she knew the only way out would be to gamble her safety on a flimsy, overcrowded boat. Despite the widely reported dangers, Khadija could no longer bear her situation in Lebanon – life had come to a standstill. She had no money to provide for her son who required urgent medications, and her other sons were smuggled to Germany in a bid for a fresh start. Khadija could not work because she lacked the necessary legal papers. Instead, her family lived in a decaying shelter, surviving on the few dollars her son received from sporadic, informal employment. Her daughter had become reclusive and grew more despondent by the day, and her estranged husband had been kidnapped by ISIS in Syria for the second time. Devoid of hope, she implored: “Don’t I have rights as a human? Don’t I have rights within this society?” 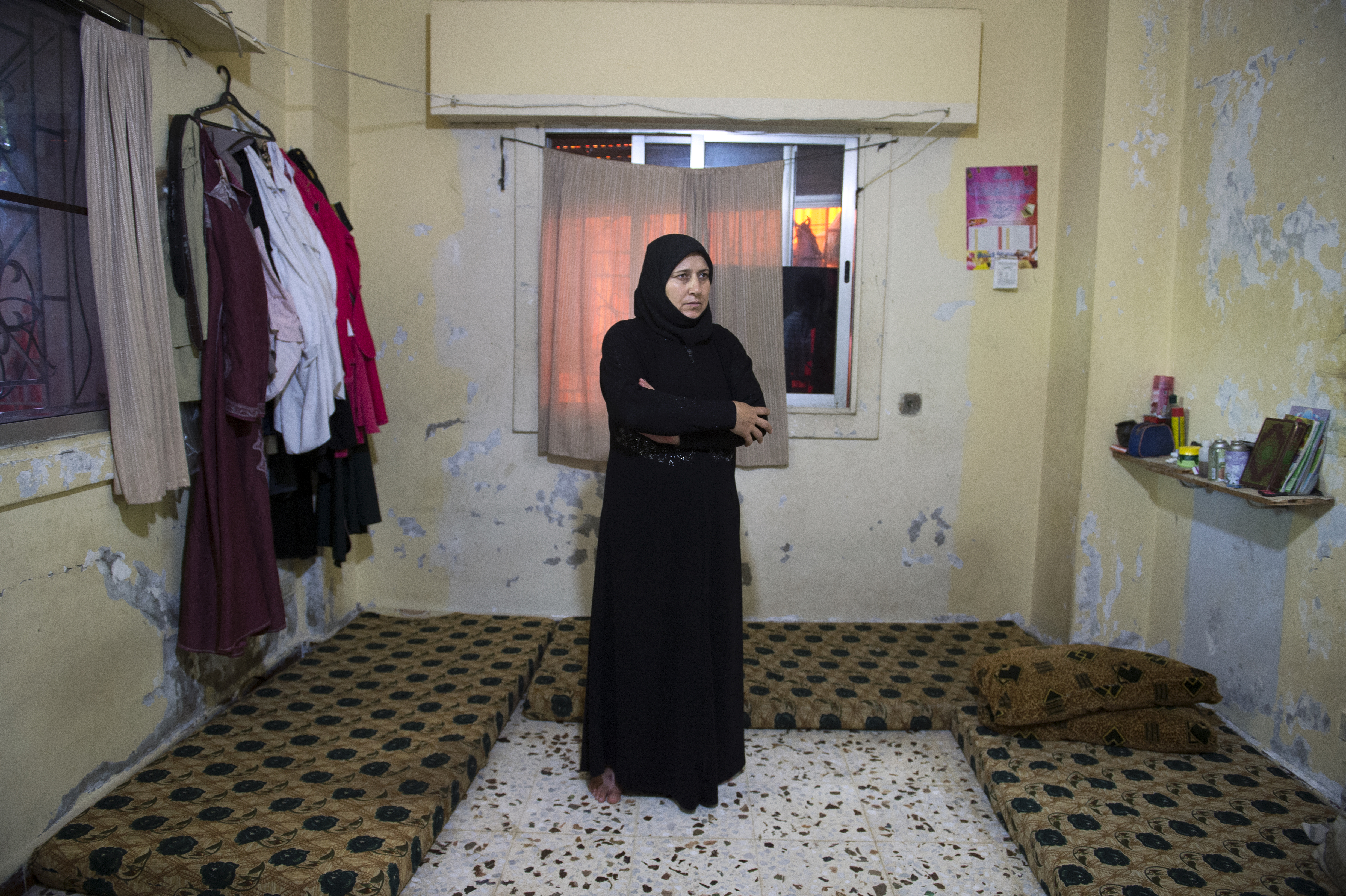 When I met Khadija a few months later, it was clear she felt dejected and defeated by the cold, hard reality of her situation. Standing in front of me, she said: “If we make it, we make it,” – Khadija was referring to the boat crossing. In that moment, I understood she had no other choice – this was not her life. Her soul remains in Aleppo buried under a heap of rubble she once called home. There are some moments in life you never forget.

Khadija and her children’s stories underpin the importance of ensuring people never lose their sense of belonging or self-worth; we cannot afford for their after to be normalised. We all have a role to play, and recognising our collective responsibility is a step in the right direction.

Where to from here?

It is clear that to cultivate an inclusive society, we must first invest in an after that is worth living. Youth depend on a sense of security and belonging to face the future courageously.

In my experience, when sharing their before and after in the context of GFP programming, youth tend to skim over pertinent events, instead steering the conversation to the present day. It is normal to want to focus on the positives, but there is value to be found in the details of their journeys and vital lessons society can learn if it takes note. Rather than presume the needs of young people, we must actively listen to their stories to ensure future decision-making efforts and actions are well-informed. Their after is dependent on an understanding of the situation they face, and the critical support required.

So while there will always be the threat of renewed conflict, I have learned that we need to look beyond this and address new realities. I see the long road ahead, and often wonder what it entails. I know that now more than ever youth must be invited into conversations about issues that affect them. I see the dangers of isolation and the need to belong. I have met youth who are close to giving up and just want to be heard. But there are many positives too. I see so much possibility, doors that are still open – conversations yet to be had. My experience at GFP has driven home the importance of community. Now I know it means everything.