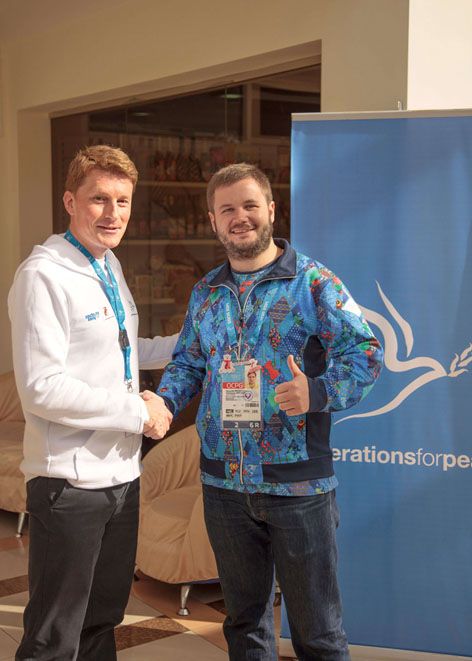 8 March, 2014 – Sochi, Russia: Mark Clark, CEO of Generations For Peace, Anatoly Pakhomov, Mayor of Sochi City, and Dmitry Chernyshenko, CEO of Sochi 2014 Organizing Committee, today marked the official opening of the Generations For Peace Sochi Camp 2014, welcoming 71 Delegates from eight countries to Sochi for 8 days of intensive peace-building training.
Clark conveyed the welcome message of HRH Prince Feisal Al Hussein, Founder and Chairman of Generations For Peace: “Hosted against the inspiring backdrop of the Paralympic Winter Games, this Generations For Peace Sochi Camp 2014 is part of the ‘Legacy Today’ Programme, a five-year partnership between Generations For Peace, Sochi 2014 and Sochi City Administration, which began with our first Sochi Camp together in 2010. We are immensely grateful for the strong support of Mayor Anatoly and Dmitry and their hard-working teams over these last five years. Together, we are giving meaning to the Olympic Movement’s vision of ‘unity in diversity’, and at this camp we’re delighted to welcome 71 new Delegates, from the Russian Federation, and from Bosnia and Herzegovina, Georgia, the Former Yugoslav Republic of Macedonia, Kyrgyzstan, Jordan, Serbia, and Turkmenistan.”
Mayor Pakhomov said: “I am happy to welcome you in the City of Sochi – the Host City of the Winter Olympic and Paralympic Games 2014! It is a pleasure for me, as well as for the entire city, that such a highly respected organisation as Generations For Peace is staging their events in Sochi! It is not only a great honour for us, but also a great responsibility. Hosting this third Generations For Peace Sochi Camp is one more opportunity to showcase to the international community that our wonderful city is opening up as a world-class resort! Welcome to Sochi, dear friends! We are very happy to meet you once again!”
Chernyshenko said: “Sochi 2014’s promise to the Olympic Movement and the world was to leave a lasting legacy from these Olympic and Paralympic Winter Games. We are so proud of the impact of this ‘Legacy Today’ partnership, which is already delivering an important part of that promise. We’re sure this camp will be a fantastic learning experience for all these enthusiastic volunteers, and will lead to concrete actions in their own communities to promote greater tolerance and respect for diversity.”
At the previous Generations For Peace Sochi Camps in 2010 and 2011, 109 youth leaders from 12 countries were trained in Generations For Peace’ unique peace-building curriculum. They in turn have trained 350 others in their own communities, promoting youth leadership and volunteerism, and engaging more than 3,600 children and youth in their peace-building activities to address local issues of conflict and violence.

As a prelude to the opening of the camp, the Delegates attended the Opening Ceremony of the Paralympic Winter Games on 7 March. Over the next 8 days, the Delegates will develop their knowledge of conflict analysis, programme design, monitoring and evaluation; enabling them to strengthen their plans for their own future programmes. They will also practice peace-building skills using dynamic sport-based games, arts-based activities, advocacy, dialogue and empowerment.