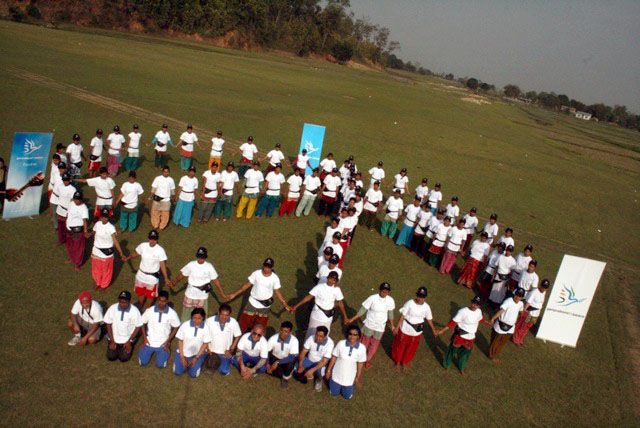 March 17, 2013 – Gorshadi Village, Nepal: To raise awareness about the tools that can be used to promote peace and understanding in remote villages of Nepal, Generations For Peace volunteers organised an advocacy event 12-13 March 2013 using sport-based games adapted to these communities. With a total population of 800, the Nepalese village of Gorshadi, whose majority of inhabitants are ethnic Tharu residents, was one of the rural communities severely impacted by the civil war of 1996-2006. This conflict created a gender void and tore apart the fabric of society after the majority of the men joined the war leaving the women and children behind to fend for themselves. Since the end of the conflict, unsettled issues persist which, combined with the migration of men in search of jobs, increase the burden shouldered by women in these communities.

Rana Helga Rayamajhi, a Generations For Peace volunteer, believes in the empowerment of women to take on more than simple traditional roles: “Women show their interest in being involved in peace-building activities and they believe they have to do more for society, which we see as a great starting point. The community believes that educating a women is equal to educating a family and that translates into educating a society.” 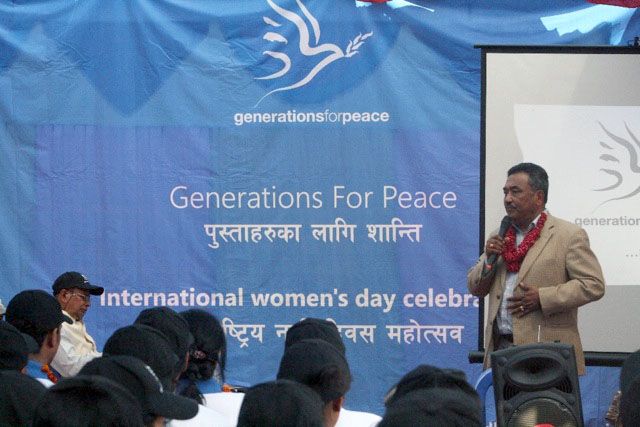 This initiative in Gorshadi Village is a major milestone for  this  community, as it addresses post-conflict issues  helping to avoid  any    future potential sparks of violence.  The focus of the event  was to teach  the use of peace-  building tools that foster  understanding and  tolerance  and help male youths deal with  the transition from  warfare  mentality to one of peace. In  adapting sport-  based games for the  village environment,  Generations  For Peace used volleyball to engage  the 75 female    participants. The games encourage positive outlook,    inclusiveness, and teamwork. By bringing these women  together  to  share their experiences and concerns for their  community,  and by  training them to use sport-based  games to reintegrate  the values of  family and community  in their young males, Generations For Peace is empowering these women to take up the role of mending their communities.

Generations For Peace volunteer, Sunwar Yubraj, believes that: “Unity is strength. When there is teamwork and collaboration, wonderful things can be achieved. Even the weak become strong when they are united.”

Generations For Peace programmes in Nepal are implemented in partnership with the Nepal Olympic Committee. Together, they will continue to support and expand these local programmes by offering further training to the women and then ongoing sport-based activities for youth and children that these trained women will organise and implement at a later stage.