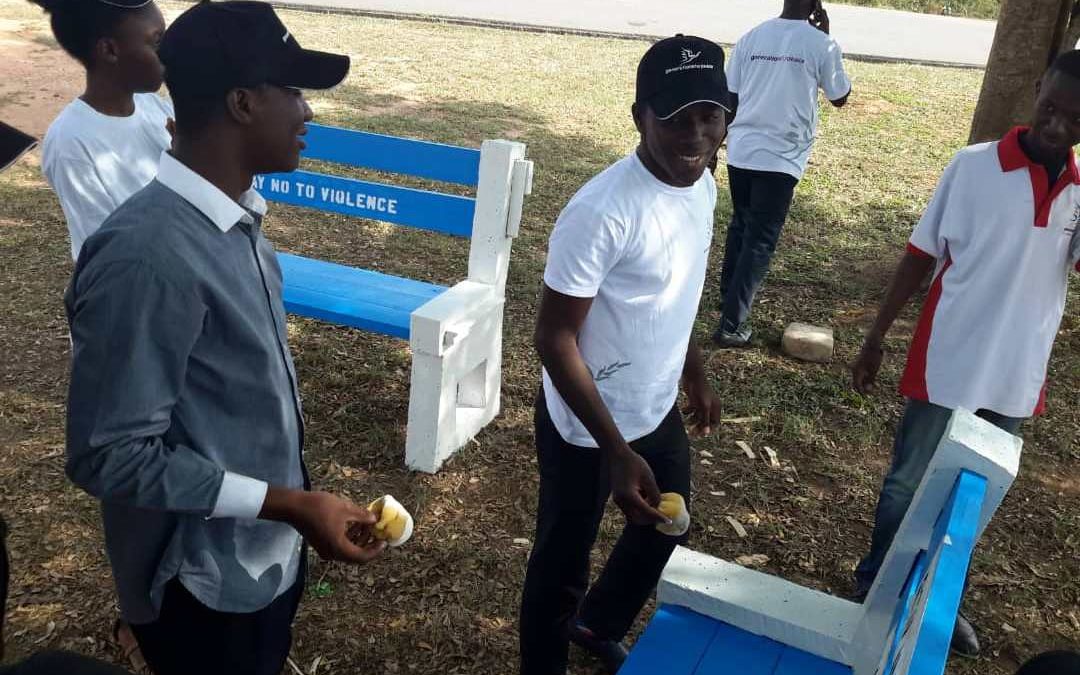 “As a student, I see to it that I have the great responsibility of changing the status quo.” – Jabir Adam Galadima

Growing up in a Ghanaian Zongo community – largely comprised of lower- and middle-class Muslim families whose heritage originates in neighbouring countries such as Nigeria, Côte d’Ivoire, and Mali – Jabir knows what it is like to be a minority in Ghana. In a nation where more than half of the citizens identify as Christians, and Muslims like him make up just shy of one-fifth of the population, the feeling of being an outsider can be overwhelming, even within a tightknit community like those composed of Zongos. 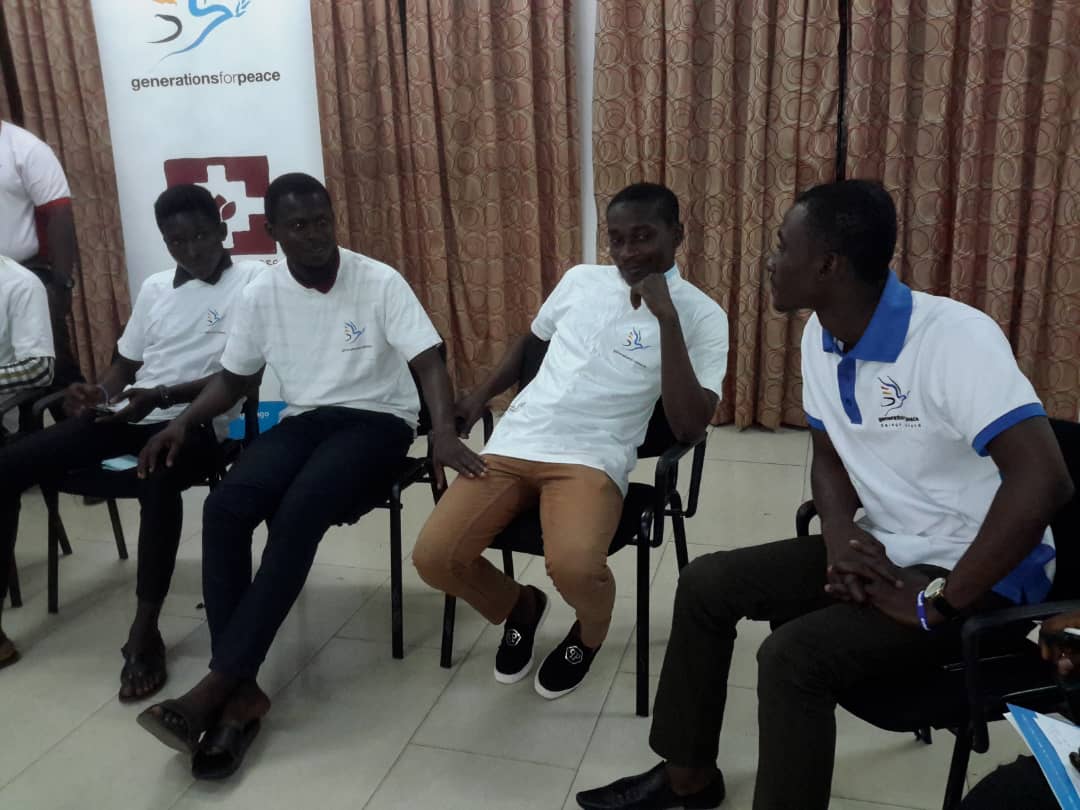 Jabir, second from the right, engages in a GFP Dialogue For Peace session at the University of Ghana

These feelings are exacerbated when you begin to recognise that your own people are being mistreated, taken advantage of, and used for personal and political gain. Jabir began to understand this at a very young age.

“I grew up to realize that some of my people are used by politicians, especially during elections, as agents of violence to serve their parochial interests,” Jabir reflected.

Anoaga Fusheini Hadiru shared a similar experience, or at the very least was raised to understand the comparable sentiment of being an outsider. Though he did not grow up in a Zongo Community, he was raised as a Muslim in the small town of Garu, in northern Ghana near the borders of Togo and Burkina Faso, just outside of Bawku, home to a long-standing ethnic conflict between the Kusasi and Mamprusi people.

It was in 2007 when Bawku became witness to mass violence, continued from the ongoing Kusasi-Mamprusi conflict and likely sparked by a visit from then-presidential candidate for the New Patriotic Party, who did not pay the anticipated respects to the Kusasi chief of the region. In the subsequent months, bitterness rose within the Kusasi community, resulting in violence during the Samanpiid Festival in December, when gunshots echoed throughout the town, resulting in injury, displacement, and even loss of life.

“This was a time when the poor began to weep, starve, and wallow in despair,” Anoaga said. “These were people that, even without the conflict, they find it difficult to provide daily bread for themselves.”

Both Jabir and Anoaga grew up witnessing and experiencing often violent conflict in and around their communities, realising early on that this violence both stemmed from a lack of education and spurred on the political reign of many local and national leaders. Both Jabir and Anoaga recognise the need for dialogue as an alternative to the violence so prevalent in the communities they know and love. Yet both see different political paths of achieving sustainable and lasting peace.

Jabir is a member of TESCON, the Tertiary Students Confederacy of the New Patriotic Party, while Anoaga aligns more closely with the National Democratic Congress and is a member of the TEIN student group associated with it. Since the democratisation of Ghana in 1992, the New Patriotic Party has been Ghana’s leading centre-right and liberal conservative party, opposing the National Democratic Congress, the country’s social democratic political party.

Both TESCON and TEIN are vocal in their communities about their political beliefs and positions, especially on university campuses like the University of Ghana, where Jabir and Anoaga study. In these spaces, the sometimes direct opposition can provide a potential breeding ground for politically-driven violence along party lines, particularly during election seasons.

A year before the most recent general elections in 2016, Generations For Peace introduced its Dialogue For Peace programme in Ghana. Training just three Volunteers at headquarters followed by an additional six Delegates locally, GFP’s new dialogue-centric programme and its activities were spread in their home communities and country, with a bulk of the attention honing in on the University of Ghana, particularly on those involved with the TEIN and TESCON groups active on campus.

Delegates and volunteers initiated a “100 Cups of Coffee and Tea” activity, which welcomed students involved in each political group to come together in a safe space that would allow them to politely, honestly, and respectfully discuss their political opinions and positions. Despite some challenges in growth and development, the programme sessions consistently saw participants engaged and thoughtful when considering their own views and those of the other party. 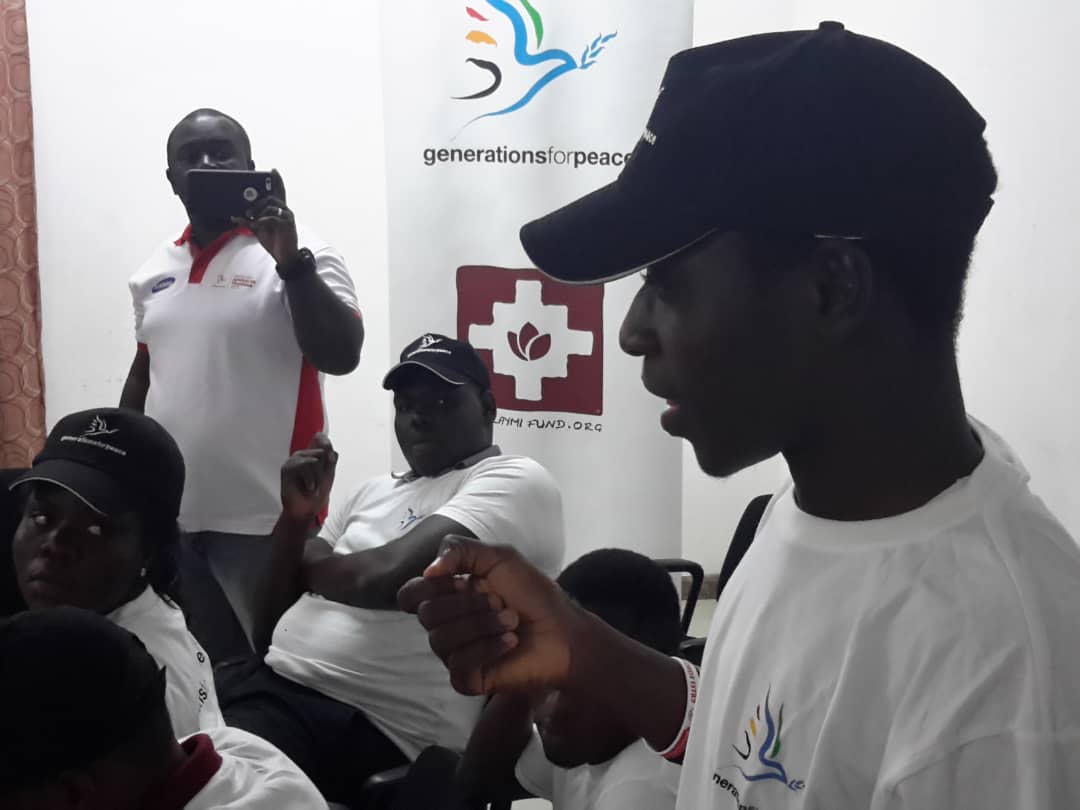 Jabir and Anoaga were both involved in these sessions, and it didn’t take long for each of them to recognise that both sides of the political aisle saw the same challenges arising in society, but had different ideas of how best to approach and solve them. Anoaga was well aware that the lack of quality education in some of Ghana’s more remote and rural communities had paved the way for members of such communities being used and manipulated for political gain. Meanwhile, Jabir had come to understand that low levels of literacy, particularly in some of the Zongo communities, left them the target of political leaders looking to gain or maintain power.

This lack of quality education and literacy not only contributes to the social manipulation of people from these communities, but also limits the ability of those within to engage in meaningful dialogue that can help circumvent violent conflict, especially in times of heightened political unrest and bipolarity. Through the Generations For Peace Dialogue For Peace Programme, students like Jabir and Anoaga have been able to come together and learn about those who might have been raised in similar context, who might share religious beliefs and feelings of being an outsider, and who might come from remote communities that have fewer educational opportunities or lower literacy rates. Because of their involvement and commitment to the peace-building activities provided to them, students like these have been able to come together and see one another not as mere political opponents, but rather as individuals with a history and identity that is more similar to their own than they would have originally guessed.

“Generations For Peace tables students from different political parties to debate issues they disagree on,” Jabir gushed. “This is a very big opportunity for me to learn how to dialogue and settle people with divergent views.”

He adds, “The importance of peace in every human institution cannot be overemphasized – every community which experiences peace and harmony has the impetus to thrive.”