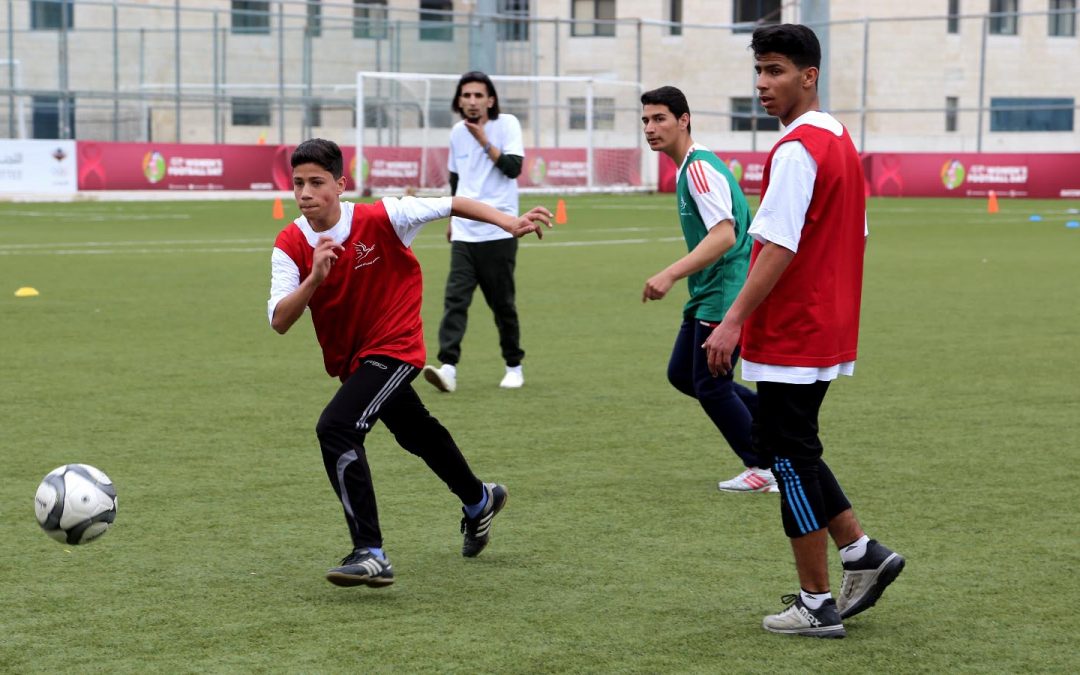 April 2019, AMMAN / JORDAN – Generations For Peace has announced a new three-year partnership with the Olympic Refuge Foundation in an effort to improve overall status of the vulnerable female and male Syrian refugee and Jordanian youth from host communities in Amman, Irbid, Mafraq, and Zarqa. Working within the frameworks of the existing Generations For Peace Nashatati (“My Activities”) and Maharati (“My Skills”) Programmes, this new programme will increase equal access to sport-based activities for refugee and Jordanian youth in 108 schools and 76 youth centres across the four Jordanian governorates with the highest number of Syrian refugees.

The partnership includes a grant, which will help Generations For Peace to sustainably engage at-risk female and male refugee and Jordanian youth through a series of weekly GFP Clubs activities, a Summer Camp designed to expose youth to a wide range of new sports during the summer breaks, and the integration of a “Sport For Protection” component developed by the International Olympic Committee (IOC), the office of the United Nations High Commissioner for Refugees (UNHCR), and Terre des Hommes. Furthermore, in each aspect of the programme, specific efforts will be taken to maximise inclusion of hard-to-reach youth, including those with disabilities.

The number of anticipated direct beneficiaries will near 12,000, including 216 teachers and 156 youth centre workers trained and mentored by Generations For Peace, in addition to 11,600 children and youth directly participating in activities. An additional 41,600 children and youth are expected to be indirectly impacted beneficiaries of this programme.

Dr. Thomas Bach, International Olympic Committee President and Chairman of the Olympic Refuge Foundation, stated, “The launching of the Olympic Refuge Foundation in 2017 originally aimed to support the protection, development, and empowerment of children and youth in vulnerable situations through sport, and we are proud to be partnering with Generations For Peace to continue working toward that goal. This partnership helps contribute to the creation of safe and accessible spaces in which all children and young people can engage in sport and take advantage of its many benefits. The innovative approach of Generations For Peace only serves to further the impact of such spaces on those who most need them.”

Generations For Peace Founder and Chairman HRH Prince Feisal Al Hussein said, “Generations For Peace is proud to partner with the Olympic Refuge Foundation, working together to expand the unique impact of our Sport For Peace vehicle to build life skills and social cohesion among male and female Syrian refugee and Jordanian youth. This collaboration will allow us to further use sport to increase vulnerable Syrian and Jordanian youth’s resilience to violence, foster their feelings of protection and belonging, support them in the process of empowerment, help them actively contribute to the betterment of Jordanian host communities, and strengthen their overall tolerance, acceptance, and social cohesion between and among one another.”

The Olympic Refuge Foundation was jointly established by the IOC and UNHCR to build on a long-standing relationship aimed at bringing sports to some of the world’s most disadvantaged children and youth. With its continued support, this programme will run until late 2021 and impact over 53,500 male and female Syrian refugee and Jordanian children, youth, and adults.