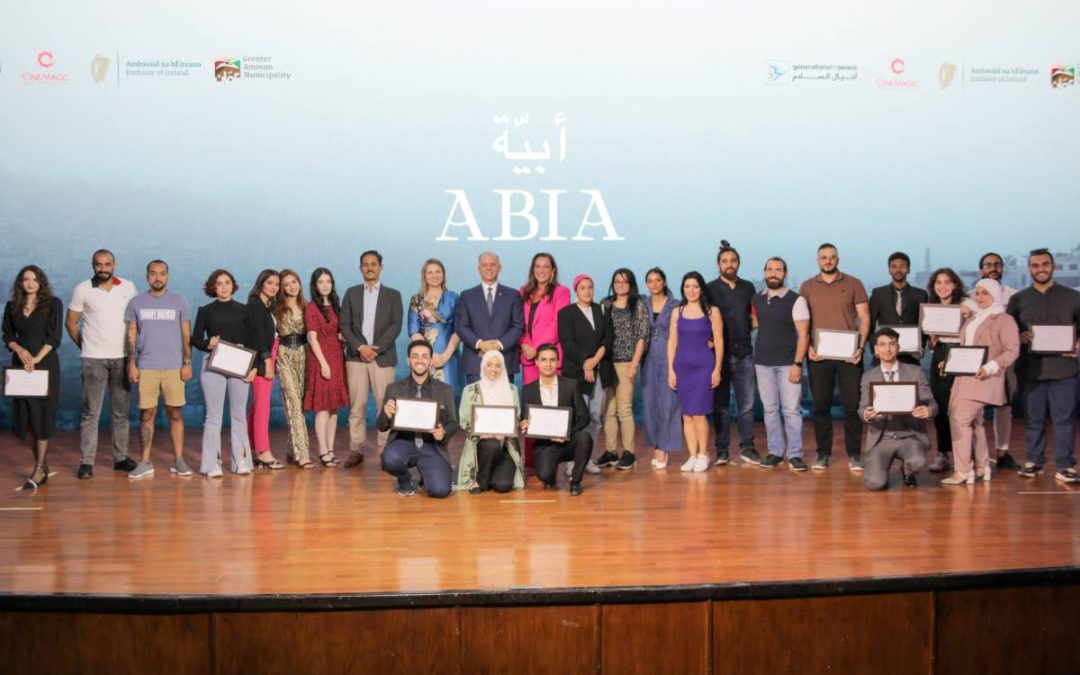 Amman, September 2022: Under the patronage of His Royal Highness (HRH) Prince Feisal Al Hussein, and in the presence of HRH Princess Aisha Bint Feisal, and HRH Princess Sara Bint Feisal, His Excellency the Mayor of Amman, Dr Yousef Al Shawarbeh, Her Excellency the Ambassador of Ireland to Jordan, Marianne Bolger, and CEO of Cinemagic, Joan Burney Keatings MBE, Generations For Peace (GFP) held today the first screening of the short film, Abia, at its headquarters in AlHussein Youth City in Amman.

The event began with a welcoming speech by GFP’s President, Dr Mohanned Arabiyat, followed by remarks from the Ambassador of Ireland to Jordan and from the CEO of Cinemagic. The ceremony included a screening of the short film Abia, which was produced in the final stage of a Training Programme implemented by GFP in cooperation with Belfast’s Cinemagic last January, with the support of the Irish Ministry of Foreign Affairs and the Embassy of Ireland in Jordan.

The film addresses the topics of asylum and domestic violence, chosen by the Jordanian and Syrian participants of the Programme in its initial stages. Abia will be shown at local and international events and forums in the coming months to give these young men and women the opportunity to share their stories globally and exchange ideas on critical social issues.

A panel discussion was held at the end of the ceremony, led by a group of young Training Programme participants, who discussed their experiences in the training and the skills they developed from the international filming and production crew that supervised the film’s production. Certificates were also distributed to all participants of the Programme.

On this occasion, the Ambassador of Ireland to Jordan, HE Marianne Bolger, said, “It is an absolute pleasure and honour for my first external Embassy event to be here today to present this inspiring film, which not only depicts the immense talent amongst youth in Jordan but also their ability to address global social issues in an informative and empathetic manner. I would like to pay tribute to the talented filmmakers and all those whose dedicated efforts created and produced this inspiring piece of work. I look forward to continuing to work with His Royal Highness Prince Feisal Al Hussein, GFP, Cinemagic, and of course, the youth of Jordan to build upon key learnings as a result of this film and to build societies that are free from violence.”

The President of GFP, Dr Mohanned Arabiyat, added, “Media for Peace is one of the most important and latest peacebuilding tools that we have adopted at GFP, where media and audio-visual production play an important role in providing safe spaces for different groups of society to exchange views and to enhance the vital role of youth in leading change. We thank the Irish Embassy and the Cinemagic team from Belfast for their outstanding support, and we hope that the training they provided to our young men and women will increase their opportunities in the film industry and open the doors to employment in this growing field in Jordan and around the world.”

“Today, we are proud of this independent production that reflects the experiences and hopes of our young men and women in a peaceful, secure, and prosperous society,” he continued.

CEO of Cinemagic, Joan Burney Keatings MBE, said, “We are so proud of all the young people we had the pleasure of working with on this special project. The goal was to work with the Jordanian and Syrian young people, aged 18-25, from concept to screen, to inspire them and develop new skills, which we hope will empower them both in practical filmmaking ability and in confidence. We hope the project will strengthen relationships between young people from different communities as they learn from each other. The commitment from the young people has been incredible, and we have had invaluable support from GFP and the Irish Embassy in Jordan. Cinemagic is proud to continually develop our work in Northern Ireland and Ireland and collaborate with key partners at home as well as the Middle East to deliver the strategic growth of the organisation.”