Youth and Violent Extremism in the MENA Region 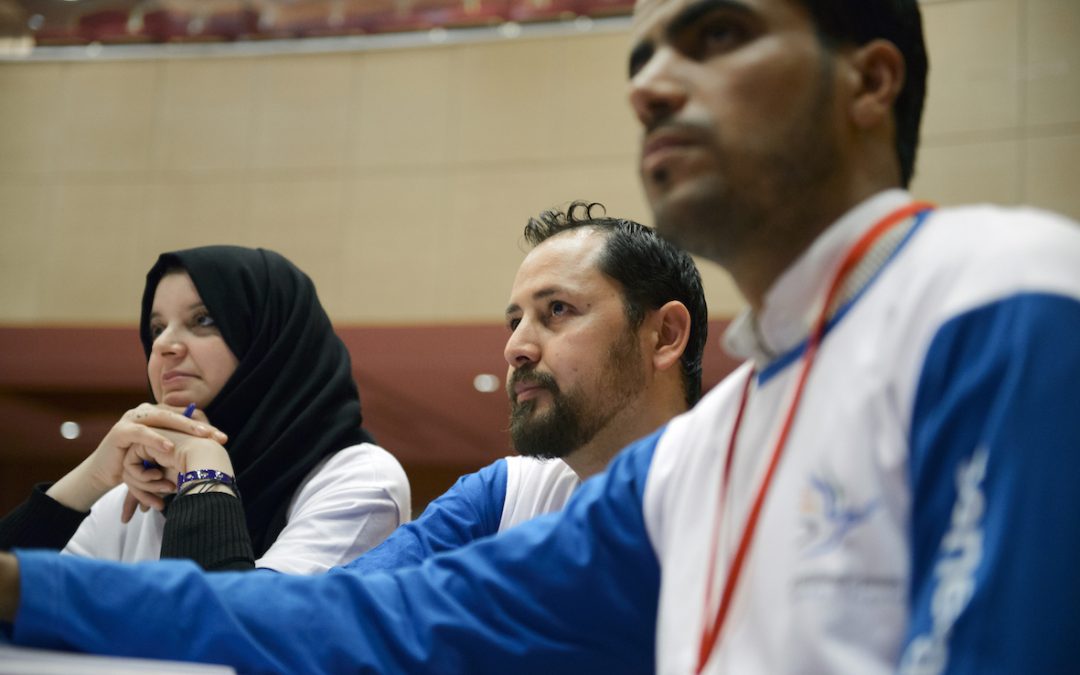 This blog is an excerpt from an article presented by Mark Clark, CEO of Generations For Peace, at the Forum on“The Role of Global Citizenship Education in Fostering Youth Peace Builders”, at UN Headquarters in New York, 10-11 September 2015.

Countering Violent Extremism (CVE) has been an increasingly hot topic amongst Western governments, but its primary impact is not on rich Western countries: over 80% of deaths attributed to terrorism in 2013 occurred in just five countries: Iraq, Syria, Afghanistan, Pakistan and Nigeria. The impact of violent extremism is also more profound in poorer societies. It destroys communities, disrupts economies, and magnifies inequality and marginalisation; further, it tests the limited capacity of governments to respond. So, if we really want to prevent the global menace of violent extremism, these communities are the places where we need to start.

The discourse on extremism is based on a contested concept of radicalisation, whereby individuals (especially youth) are socialised through their vulnerabilities and exposed to extremist ideas to commit violent acts. Unfortunately this is an over-simplification, but it has become the conventional wisdom for explaining how individuals become involved in acts of political violence or terrorism. Because it is not that simple, simple solutions do not work and policies to counter violent extremism and radicalisation are very often counter-productive and actually fuel recruitment.

The Countering Violent Extremism agenda is also a very negative narrative, not at all attractive or engaging for youth. Our starting point should not be a counter narrative, but an alternative positive narrative. Even an appeal to “moderate” behaviour is not appealing to youth, especially at the age when they are exploring their identity and role in society. Instead we must inspire youth with more compelling positive opportunities for autonomy, significance and belonging. 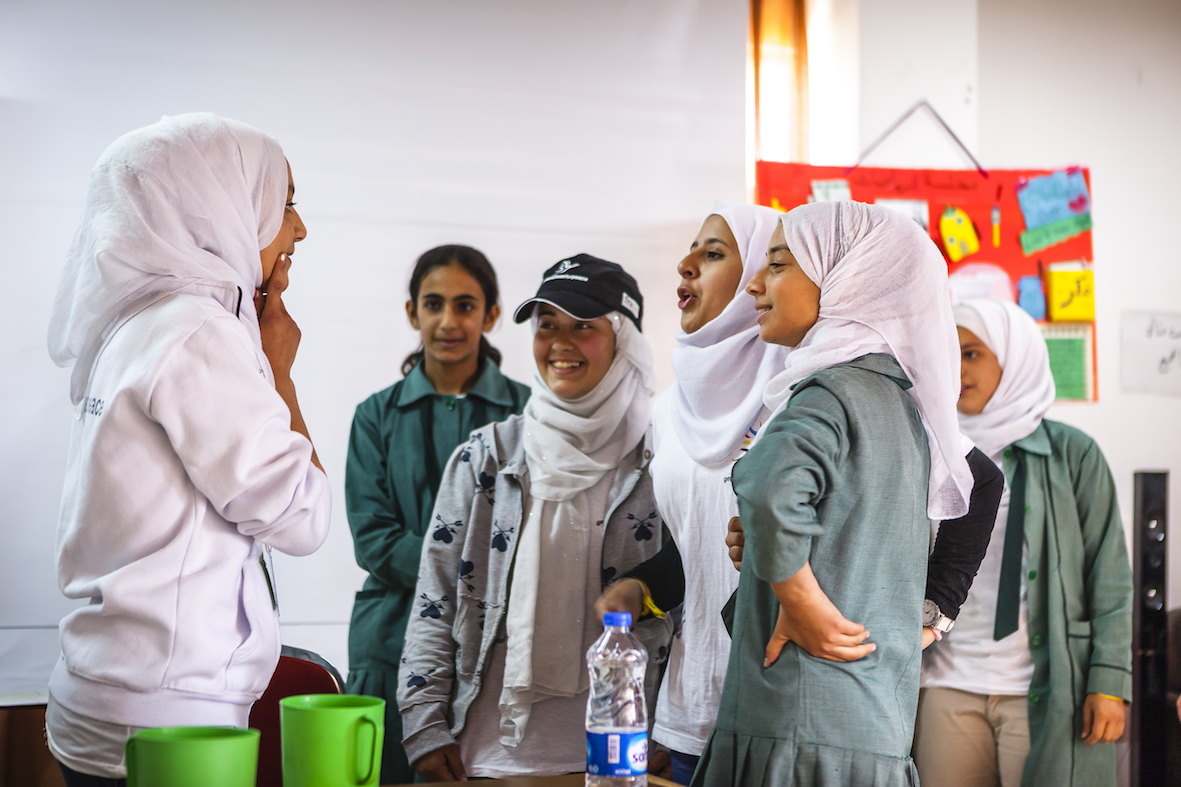 It is important for governmental policy makers and donors to understand that semantics matter, and the language they are using may be counter-productive. At the very least they need to appreciate that the language used on the ground may need to be very different from that used in their policies. In the same way that it is rarely useful to label a programme explicitly as a peace-building or conflict transformation programme, so it is certain to be completely counter-productive to walk into a community and talk about starting a programme to counter violent extremism.

Are jobs the answer? With a demographic youth bulge and high youth unemployment across the MENA Region, the assumption is that unemployed youth are most vulnerable to recruitment and if given a job will have stronger resilience and something to lose. But recent research by Mercy Corps shatters that myth and finds that principal drivers of political violence are rooted not in poverty, but in experiences of injustice, discrimination, corruption and abuse by security forces. And the Global Counterterrorism Forum states explicitly that: “Research has rejected the thesis that poverty begets violent extremism”.

Is inequality to blame? Across the MENA Region, grievances that sparked the Arab Spring have not been resolved, including governance failures, corruption, illegitimate rule, perceived injustices, marginalisation, discrimination, alienation, rejection, lack of acceptance, lack of opportunity, lack of voice, and lack of safety/security.

In such a context, there are extremely varied and competing motivations for joining extremist groups. We need to understand the complex push and pull factors within which both perpetrators and victims of violence must navigate, and which may comprise a mix of opportunism and ideology; lack of access to basic public services, including education; material incentives to join; pre-existing social connections within the armed factions; or the search for safety under the auspices of armed groups: all of these are significant predictors of enlistment in a violent extremist group.

From Generations For Peace’s work to respond to the Syrian Refugee Crisis in Jordan and Lebanon, it is clear that displacement exacerbates male and female youth vulnerability to inequalities for both refugees and host community youth, as communities suffer from pressures on accommodation, food, water, education and health services, and both formal and informal employment.

Are categories useful? Amidst all the complexity it can be helpful at least to appreciate that push and pull factors may be very different for joining local domestic extremist groups compared with groups abroad; and for youth from poorer, less educated and more marginalised communities compared with better educated elites. So, in our Generations For Peace programmes in Tunisia, Libya, Jordan, Lebanon, Somalia and Pakistan, we see that there may be very different motivations, different modes of recruiting; and also different possibilities for prevention when working with youth in poor communities as compared with working with university educated youth. But such categories cannot be used too simplistically: adding to the complexity is the fact that individual vulnerability and motivation is very dynamic, as individuals may drift in and out of radical groups and moderate groups depending on a variety of competing factors, circumstances and influences.

Should we forget about root causes and instead focus on disrupting recruitment strategies? One response to this complexity is to shift our attention from theories of motivations, to analysis of the distinct strategies of recruitment pursued by different groups at different times. However, whilst disrupting recruitment strategies may be effective in the short term, Generations For Peace believes that a stronger long-term response requires addressing root causes, strengthening youth resilience and reducing vulnerability. For example, our work in Jordan and Lebanon with Syrian refugee and local host community youth seeks to understand more deeply their coping mechanisms, issues of tension/violence, push/pull factors for radicalisation and joining violent groups, and to mitigate those tensions, reduce violence, and improve social cohesion and resilience.

Our Generations For Peace Institute research partners at the University of Oxford’s Centre for the Resolution of Intractable Conflict (CRIC), recently presented to the UN Security Council their “Devoted Actor Hypothesis of Conflict”. Their extensive research in different countries supports this hypothesis, that when sacred values (values that may be so strongly held as to justify extreme personal sacrifice and use of extreme violence) become embedded in strongly fused identity groups, then members of these value-driven groups become willing to collectively defend or advance those values through costly sacrifices and extreme violence, in ways resistant to material trade-offs and normative social influence. It does appear that religious beliefs can have a powerful influence on sacred values. And yet research shows repeatedly that suicide bombers are not brainwashed, mentally ill, or religious zealots.

This means that to protect youth attracted by sacred values which support extreme violence, we must offer youth alternate sacred values based on tolerance and respect for diversity, but also, crucially, actual opportunities for leadership, significance, autonomy in decision-making, and “group fusion” connection with a positive peer group participating in a collective effort that delivers concrete impact in their community and which thereby delivers meaning in their lives. 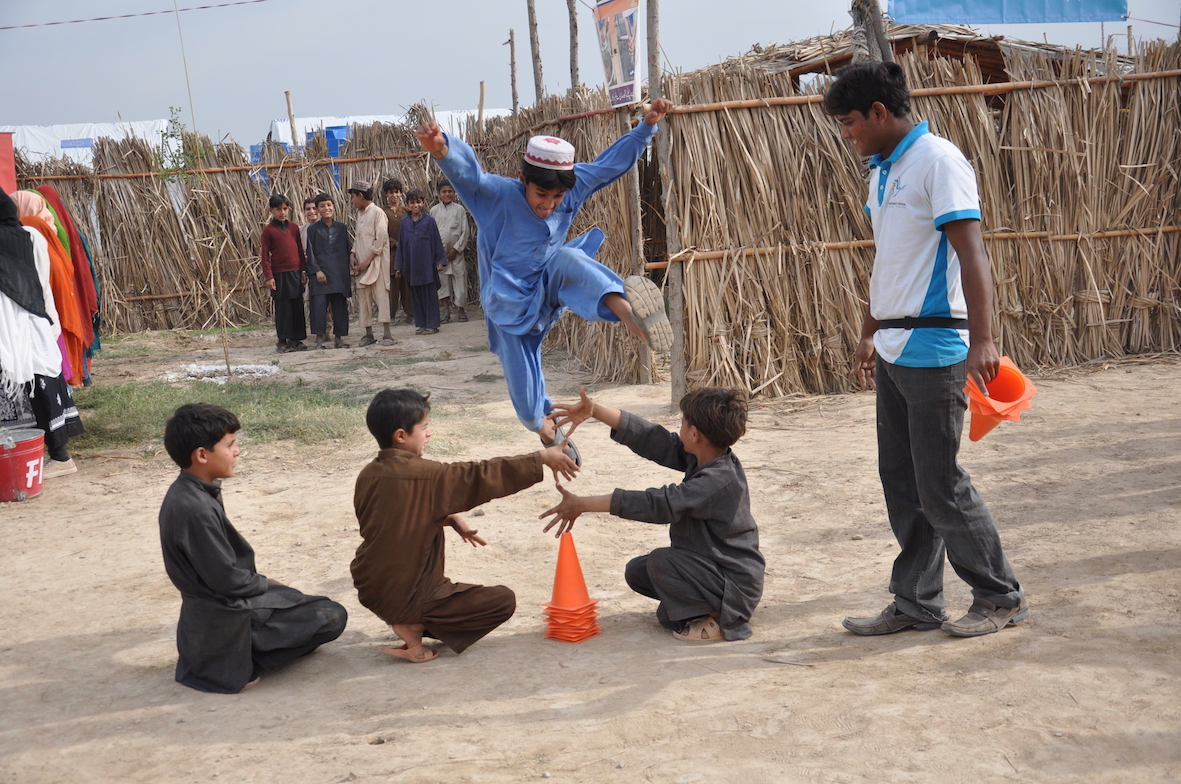 This is precisely the focus of Generations For Peace programmes engaging vulnerable youth in such contexts. And we know it works when in our programmes, in Tunisia, in Libya, and in Somalia we have volunteers who themselves were previously members of violent extremist groups, and who have now found with Generations For Peace a much more positive peer group and senses of autonomy, significance and purpose.

We still need more research. Time and again, programme evaluations conclude that programming designs would have benefitted from a more comprehensive understanding of violent extremism in the local contexts, to identify more narrowly those most at risk, such as teenagers, ex-convicts, members of specific clans, etc.; and to understand the relevance for each of material incentives, fear, status-seeking, adventure-seeking, and other individual-level drivers. Research has shown how radical ideas are internalised by violent extremists, but has not adequately explained how the majority of people exposed to radical ideas are not radicalised.

But it is still hard to get funding for research; and it is hard to get access to communities to engage youth in such research; and it is harder still to get access to primary data from actual perpetrators of violent extremism. And yet, the best access can be provided where there is already a local presence and relationships of trust and credibility in a community, built up over years of local community youth programming. And we need precisely such programme-oriented action-research, focused on local communities, to provide the evidence base for effectiveness and sustainability to inform effective adaptive programming.

For effective interventions, rather than reaction, we need to focus on prevention among the most vulnerable in communities, listening and learning from those in the midst of the challenge, especially youth. We must avoid reinventing the wheel. A lot of work has already been done and there is good guidance already out there.

Carol Bellamy (former head of UNICEF and now Chair of the Global Community Engagement and Resilience Fund) emphasises the need for local community actions to be a crucial part of the response. The recent Declaration from the Amman Global Forum on Youth Peace & Security, the Guiding Principles on Young People’s Participation in Peace building, and the Global Counterterrorism Forum’s Ankara Memorandum on Good Practices for a Multi-Sectoral Approach to Countering Violent Extremism all provide very useful guidance and recommendations.

These are already followed by our Generations For Peace approach, with excellent case studies from Jordan, Lebanon, Nigeria, Palestine, Sudan, and Yemen. We also see our work as an example of Global Citizenship Education (GCED) in action in very challenging conflict contexts.

All Generations For Peace programmes work with youth volunteers at grassroots level empowering communities to address local issues of conflict and violence, in diverse forms in different contexts. 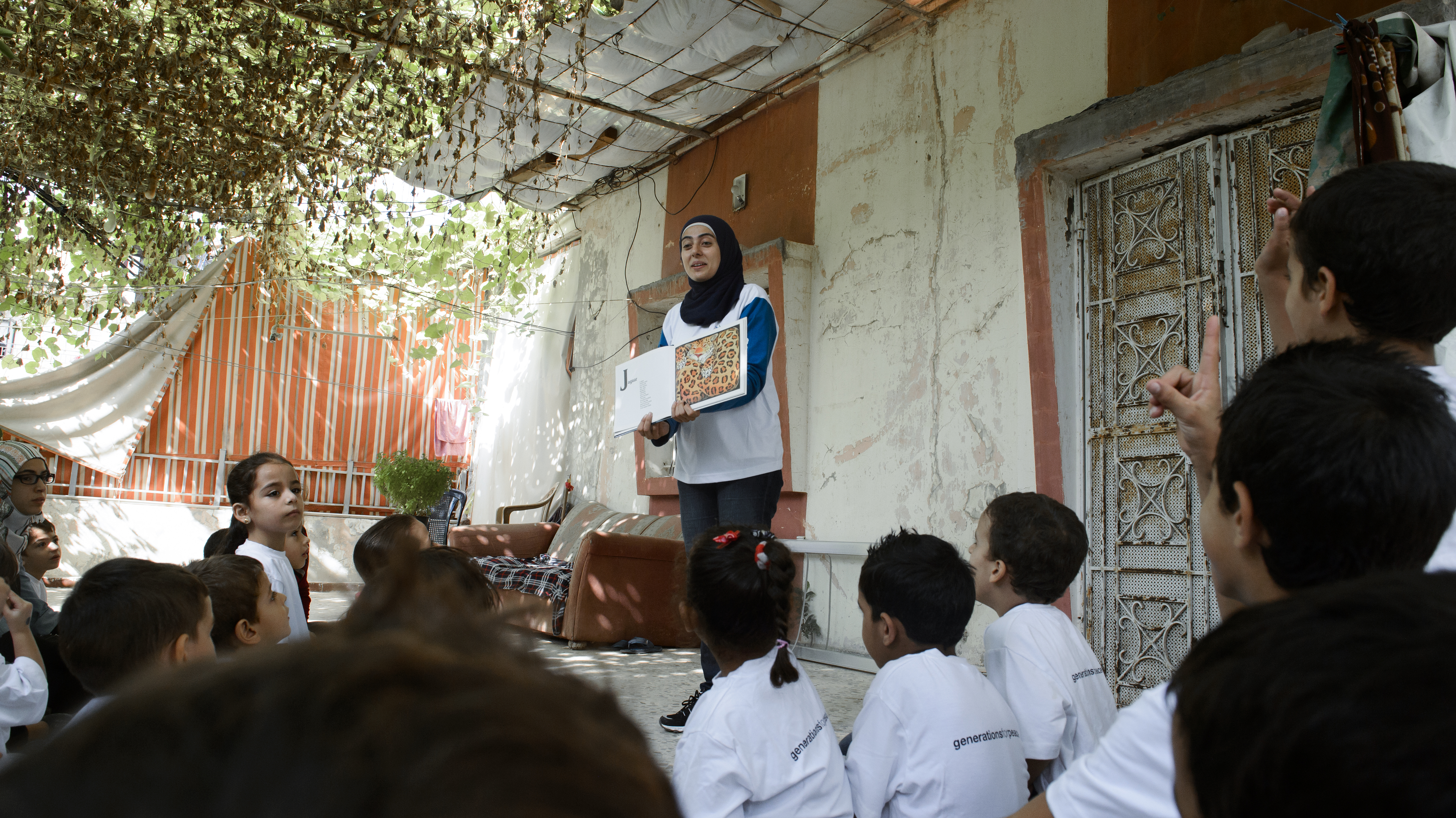 We believe in the enormous potential of young people to lead change. We give youth autonomy, significance and purpose by empowering them as volunteers to design, implement and evaluate effective programmes to address local issues of conflict and violence which they are passionate about changing in their own communities.

Our volunteers select activities that are most appropriate for their target group (making a particular effort to engage the most vulnerable to violence), local conflict issue, local culture and their own strengths and capabilities. The five tools are: Sport, Arts, Advocacy, Empowerment and Dialogue For Peace. In each case these youth-led actions engage a target group for a sustained series of activities over time, to pass on Generations For Peace values, knowledge and skills, and to foster empowerment shifts in personal capacities within individuals and recognition shifts in relationships between people and identity groups, building individual resilience but also collective resilience through peer groups and increased social cohesion and social capital.

In the end, we believe this approach, which respects and empowers youth and offers positive sacred values and positive group fusion, is our best contribution to preventing violent extremism.