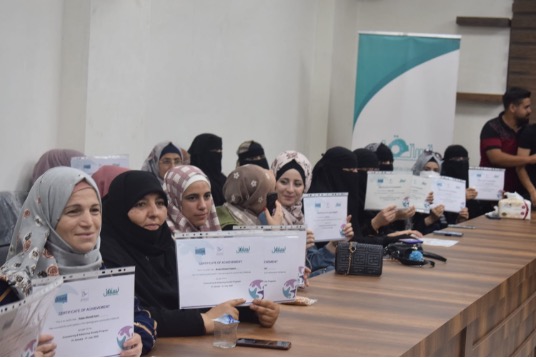 Syria, August 2022: Generations For Peace (GFP), in partnership with the Tastakel  Organisation, concluded the “Social Dialogue for Empowering and Advancing Society Across various Syrian Religious and Ethnic Identities” (IDEAS) Programme, which benefitted 144 participants who graduated in a closing ceremony held recently after receiving an extensive training on leadership and community initiatives. The first-of-its-kind Programme in Syria aimed to promote dialogue as a tool to enhance integration and cohesion between people from different religions and regions within the Syrian community.

The seven-month Programme worked to build the peacebuilding capacities and skills of participants and promoted the concepts of acceptance, respect, and cooperation among them through dialogue. It brought together diverse groups of women and men from different religious and ethnic backgrounds in the Syrian regions of Azaz and Afrin and provided them with a space for meeting and engaging in dialogue. Participants received 60 hours of hybrid training on various topics, including law and transitional justice, gender, advocacy, resilience, conflict transformation, and peacebuilding.

During the Programme, the participants worked together to develop ideas for their community initiatives, two of which were implemented over three months, from June to August 2022. The first addressed transitional justice and trained 80 individuals, including university students, social activists, and female leaders, while the second focused on opening crossings for humanitarian aid.

Commenting on the occasion, Dr Mohanned Arabiat, President of GFP, said, “Our belief in local civil society institutions and the vital role of female leaders in empowering societies and transforming conflict motivated us to implement the IDEAS Programme in partnership with Tastakel Organisation. Throughout this first-of-its-kind Programme, we have put our extensive experience in implementing international peacebuilding programmes to strengthen social dialogue in Syria. Today, we look forward to implementing more programmes in Syria that will enhance social cohesion and promote sustainable peace.”

Hind Kabwat, Chairman of the Board of Directors of the Tastakel Organisation, added, “I congratulate all the participants of this Programme on their development of awareness and knowledge necessary to build a better future for our beloved Syria. Through this Programme, we closed societal gaps and built bridges of cooperation between our community members from all areas in Syria and various sects and ethnicities. We thank everyone who contributed to the success of this Programme, and we especially thank GFP and its team for the valuable opportunity to work together throughout the Programme’s journey,” she concluded.